(Minghui.org) Falun Gong practitioners held several events in Aarhus, Denmark over the long holiday weekend of June 3, 2017, to introduce the practice and to raise awareness of the ongoing persecution in China. This was a major weekend in Denmark, as Constitution Day, Father's Day and Whit Monday were all celebrated.

A free Falun Gong workshop was given at the Aarhus Community Activity Center. The practitioners introduced Falun Gong by first discussing traditional Chinese culture, then discussing how the Chinese Communist Party (CCP) has systematically damaged China's 5,000 years of culture. They spoke about Falun Gong's public introduction in 1992 and its rapid and wide spread across the globe. Today, it is estimated that 100 million people benefit from practicing Falun Gong. 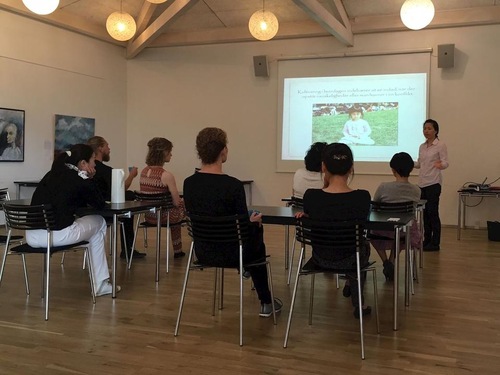 Falun Gong workshop given at the Aarhus Community Activity Center.

One woman said she worked in a kindergarten. She was very stressed by her job and found it difficult to control her temper, as the kids were often noisy and unruly. She said, “I was looking for a way to solve this issue. One day I saw a program on New Tang Dynasty TV about Falun Gong and how it helps in healing illness and keeping fit. I got interested and started to read Falun Gong books. I then started practicing Falun Gong. My anxiety and discomfort faded away. I became happy. My husband said I became peaceful and much more even-tempered.”

Another practitioner shared how he learned to always look within when facing conflicts. Through this process, he has adjusted his thoughts and actions and has become truly sincere, kind and tolerant.

Kristina, one of the workshop participants, had taken part in the group exercise practice the week before and felt that the pain in her ankle, which she'd injured dancing, was significantly reduced. She decided to participate in the workshop and brought her friend Jespe. This was Jespe's first time to hear about Falun Gong. He said, “I've been interested in many practices and have tried yoga. The yoga instructor only taught poses. Falun Gong has more profound connotations, as in addition to the exercises, there is a spiritual requirement.”

Aarhus' magnificent new library, DOKK1, is the largest cultural building to be built in Denmark since the Copenhagen Opera House. It has become a major cultural center and gathering place in the city.

As part of the weekend activities, on June 3 practitioners staged an event in front of the library, where they introduced Falun Dafa and raised awareness about the 18-year suppression of the practice in China. They displayed large banners worded “Falun Dafa is good” and “Truthfulness-Compassion-Forbearance” and demonstrated the Falun Gong exercises. Many passers-by paused to watch the event. 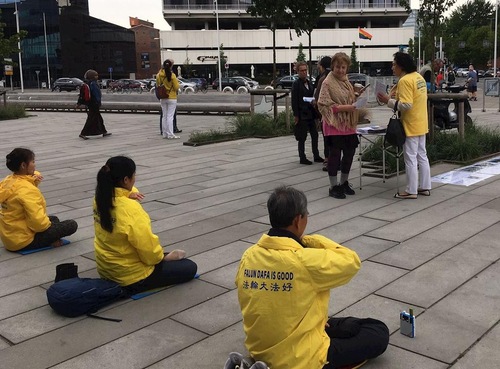 Group exercise practice in front of the new library in Aarhus. 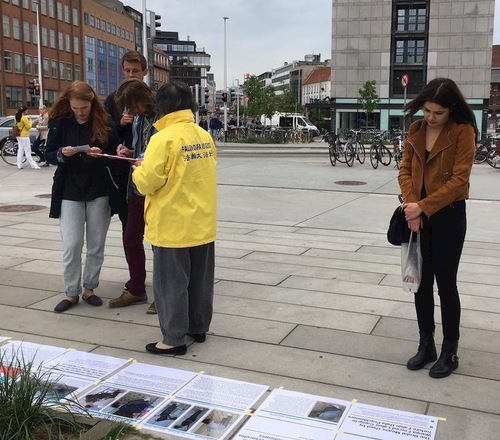 Passers-by read information about Falun Gong and sign a petition against the CCP's persecution.

Steen and his friends watched the exercise demonstration carefully. When he learned that the exercises were good for a healthy body and mind, he became interested and ask where to learn Falun Gong. He left his contact information for the next workshop.

Through photos and by talking with people, practitioners exposed the ongoing persecution in China, especially the CCP's state-sanctioned live organ harvesting from Falun Gong practitioners for profit. Passers-by were stunned by the brutality of the persecution. Many people showed their support by signing a petition calling for an end to the atrocities.

“Power of Dafa: Safe in the Presence of Five Thieves”