(Minghui.org) Under a crystal blue-sky, a large group of Falun Gong practitioners performed the meditative exercises in downtown Hamilton, New Zealand on June 3, 2017.

Many pedestrians on the plaza stopped to watch and follow along with the movements. 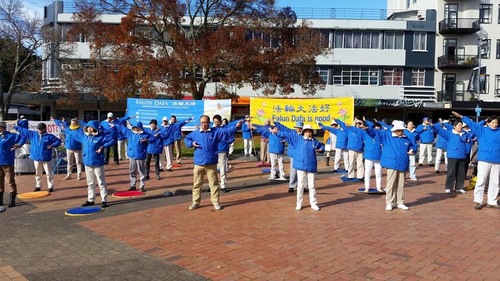 Ms. Marama from Manukau, Auckland had learned about Falun Gong's benefits to one's physical and mental well-being at other Falun Gong events before. She was excited when she heard about this event in Hamilton and came, eager to learn the exercises.

Two passersby were struck by the powerful energy they felt from the large group exercise session. They stayed for quite some time, commenting that it made them feel relaxed just being nearby.

Some passersby expressed sympathy for the Falun Gong practitioners in China who have been subjected to persecution in China for so many years. Jawes Hay and James Burdon, both Christians, expressed support for practitioners' efforts. James wrote the following message on a petition form: “The people practicing Falun Gong do no harm, may they find peace and freedom from suffering.”

Many citizens signed a petition calling for an end to the persecution, especially the state-sanctioned forced organ harvesting atrocities. Twenty-four Chinese, most of whom were young overseas students, withdrew their membership in the CCP and its affiliated youth organizations.