(Minghui.org) A violent storm hit Tonghua City, Jilin Provence on the afternoon of May 5, 2017. It was a hard rain that flooded the area, taking away signs, trash cans, even small sheds. I was unprepared and had neither rain gear nor an umbrella with me as I headed home from my daughters house. I arrived safely, and surprisingly the clothing under my overcoat was dry.

I am known as Granny Zhang. I am 85 years old, short and thin, and just 4 feet, 9 inches tall. I believe I was protected during the storm by Dafa's Master. I told my story to my daughter and she wrote it for me. We are grateful to Master for my safety during such a strong storm. 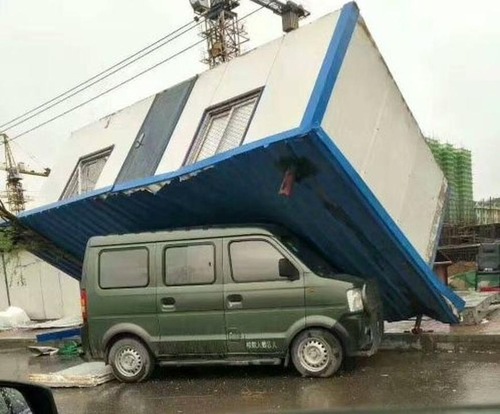 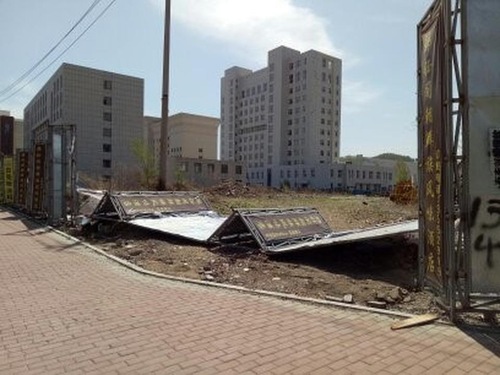 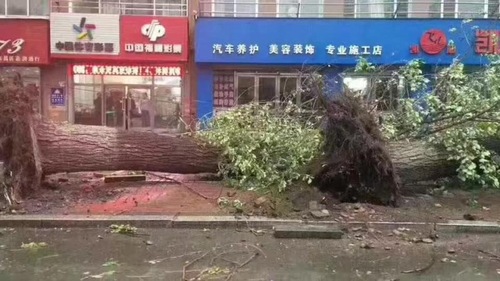 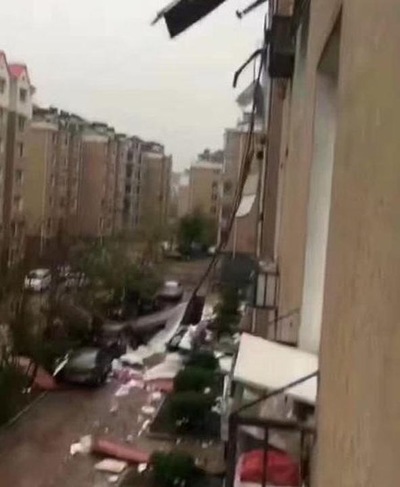 I had been babysitting at my daughter's home that day – May 5th. I was about to leave but my daughter said that wasn’t a good idea, as the weather was turning bad. She did not feel it was safe for me to be outside. But I was determined, and did not even take the umbrella my daughter offered me as I left her home.

It was not long before I saw dark clouds in the direction of my home. Quickly the wind picked up and the rain began. The wind became very strong and the rain was heavy. An umbrella would not hold up under such a strong wind.

The wind howled and became stronger, to the point where items were flying through the air. Everyone took cover. My shoes were soaked and my trousers were wet from the knees down.

I was not sure what to do. It would be difficult to go back to my daughter's house. Could I make it home? Either choice presented a dangerous situation.

My daughter called me on my cell phone. She said, “WeChat has posted videos and photos, showing that trees along the streets up to 12 inches in diameter have been blown down by the strong winds, and signs, sheds, and other loose items are rolling across the ground. The situation is very dangerous.”

I did not want my daughter to worry, and responded by saying, “I have money to take a taxi. Please don't worry.” Actually, I did not have a single penny with me. After hanging up, my daughter called back, but I did not answer.

I began feeling cold and scared, but then I thought about Falun Gong. In my mind I sought Master's help, “Master, I am stuck in a strong storm. Please help me get home safely!”

With this thought I felt different–confident. The storm no longer worried me. I was no longer scared or cold, and I had no fear. I was with a group under cover and decided to leave.

I was wearing a purple top over a black cotton t-shirt, and black trousers on top of thin leggings. The rain was still coming down hard and constant.

I saw only two other people walking in the street. They were together and holding on to each other so they would not blow away. They were soaking wet. Even the parked cars were shaking in the wind. But I felt steady. The wind did not affect me and I did not feel the sting of the rain on my face and head.

The water in the streets was up to the top of the curbs. As I walked home, my daughter, granddaughters, and son-in-law continued calling me. My son-in-law even went driving around looking for me.

It usually takes me 30 minutes to get home, but today it took me an hour. When I arrived home I went inside and took off my wet clothes. My shoes were full of water. My top and trousers were also wet, but I was totally surprised to find the clothing underneath was all dry!

I have been been through many rain storms and have always been soaked through to the skin. Even wearing rain gear could never keep me dry in such a heavy storm.

I looked in the mirror and saw my face. It was dry and even my hair was only slightly damp. How could this be? I was amazed. Then I realized that Master had protected me in the storm. I said, “Master, thank you so much. How can I show you my gratitude?” I got down on my knees.

Days have passed, but I am still in that frame of mind, and feeling extremely grateful.