(Minghui.org) TV Gelderland, a station in Wageningen, the Netherlands, interviewed Falun Gong practitioners at their group exercise site in beautiful Arboretum de Dreijen in May 2017. 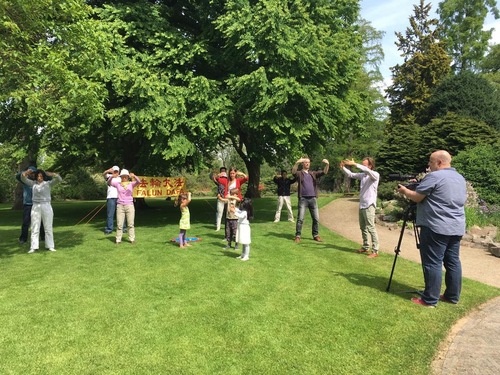 Mr. and Mrs. Vos told the reporter about their experience in Falun Gong cultivation practice. Mr. Vos heard about Falun Gong from one of his Chinese colleagues more than ten years ago. His colleague did the Falun Gong exercises during his lunch break. Mr. Vos thought the movements were beautiful and became interested. He tried it and felt great.

As Mr. Vos did the exercises in the park occasionally, he began feeling better and better. He also read the book Zhuan Falun and felt that the author had revealed the meaning of life combined with modern science in a way easy to understand, Truthfulness, Compassion, and Forbearance. He felt enlightened on many questions he had pondered.

Mr. Vos later introduced Falun Gong to his girlfriend, who is now his wife, and both began practicing. Their children grew up under the influence of the Falun Gong principles, Truthfulness-Compassion-Forbearance. They are healthy and well-behaved. 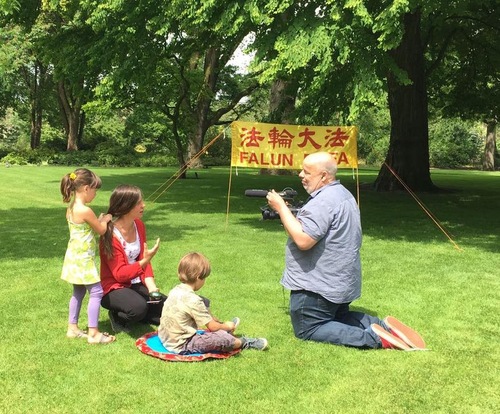 Mrs. Vos and her children at the interview.

Mr. and Mrs. Vos established this group exercise site in Arboretum de Dreijen to teach others free of charge. Many people who had an interest in learning Falun Gong came to join their exercises. As time went by, the number of people grew. They enjoy sharing their great experience of self-cultivation.

Ms. Wang, who grew up in the Netherlands, started practicing Falun Gong in 2008, under her mother's influence. She told the reporter that Falun Gong had given her great health and a calm personality, and taught her great principles of life.