After teaching the exercises, two practitioners shared with the attendees their experiences of practicing Falun Gong. 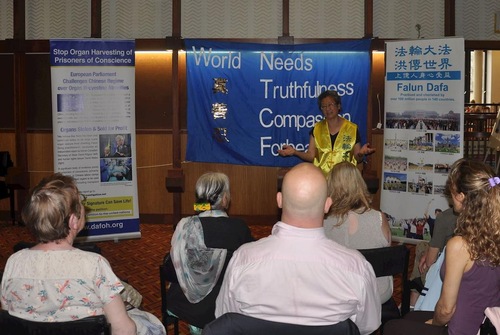 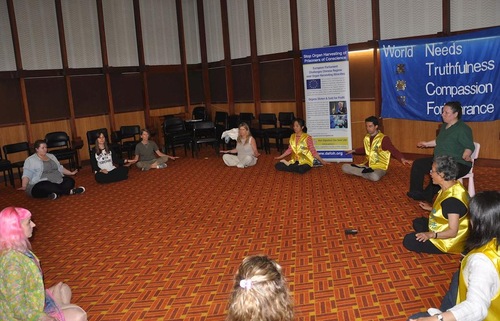 Ms. Huang started practicing a year ago when a friend suggested that it might help with her kidney stones.

When she first started attending the practice site, she could not lift up her arms to do the standing meditation. But she persisted, and about four weeks later, she was able to finish all the exercises with ease. Around that time, hospital examinations showed that her kidney stones were gone.

“I haven't had to take any medicine since I started the practice,” she said. “My health was completely restored and I am full of energy every day.”

“More importantly, Falun Gong has changed my temper,” she added. “I try to follow the guiding principles of truthfulness-compassion-forbearance. Not only have I become happier, I am also nicer to other people. The relationships between me and my family and co-workers are getting better and better.”

Twenty-eight-year-old graduate student, Saimis, started practicing Falun Gong five years ago. He said he used to be addicted to video games and was depressed. Falun Gong pulled him out of the trap, he said.

He also saw physical improvement. He had had psoriasis since he was a teenager. He suffered itchiness on his back, chest, and arms, and no treatment helped. However, within three months of practicing Falun Gong, his skin cleared up.

“My skin has never been smooth and clean,” he said. “My mind has also become clean and pure.”

The attendees said they planned join the weekly exercise practice site. Some of them asked if the practitioners could hold a beginners' workshop every week, so that their friends and families could attend.

“Experiencing the Power of Falun Dafa for the Past Twenty Years”