(Minghui.org) Falun Gong practitioners recently participated in Folkemødet in Bornholm, Denmark, between June 15 and 18, 2017. Also known as the People's Meeting, this annual gathering and festival attracts over 100,000 visitors, bringing together a large number of government officials and business people, as well as ordinary citizens, who come together to discuss and debate society's “opportunities and challenges.”

Practitioners demonstrated the Falun Gong exercises, displayed banners and talked to people about the benefits of this traditional spiritual discipline and how it has been brutally suppressed in China for the past 18 years. 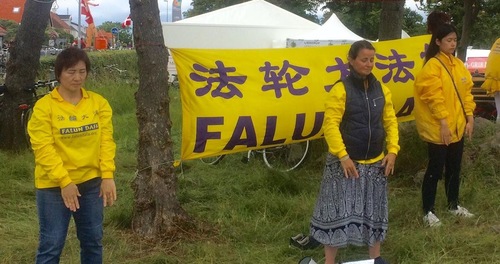 “This Is What We Need” 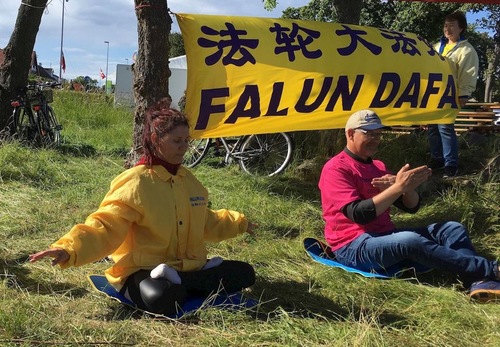 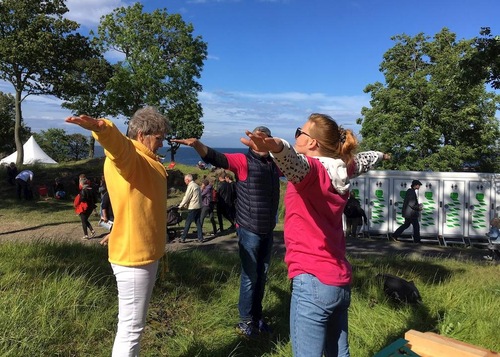 Two women from Copenhagen who work for psychology and health-care agencies were impressed by the slow, gentle Falun Gong exercises, and stopped to talk with practitioners. “We know the importance of balancing body, mind and spirit,” said one of the women. “I can feel inner peace and harmony.”

Upon learning about the Chinese Communist Party's (CCP) persecution of Falun Gong, one man said, “Now I know that the CCP’s theories contradict the principles of Falun Gong – Truthfulness-Compassion-Forbearance.”

Two men from west of Copenhagen were happy to learn about Falun Gong. They agreed that traditional values are important for people nowadays and hoped to learn the exercises. After hearing about the suppression in China, one man said that he supported practitioners' ongoing efforts to raise awareness of the persecution. “What you have been doing is great,” he said.

One woman said that the principles of Falun Gong resonated with her. “Truthfulness-Compassion-Forbearance is what we need,” she affirmed.

Support for Ending the Persecution 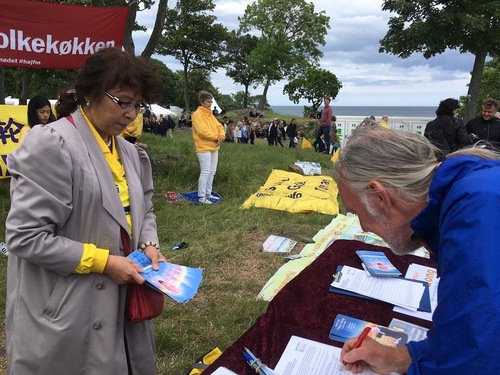 A man signs a petition to help stop the persecution in China.

One young couple said they were drawn to Chinese culture and had been to China. A practitioner explained how the CCP has defamed Falun Gong with hate propaganda throughout the years. The man thanked the practitioner for clarifying the issue for him. “No wonder there were so many negative comments about Falun Gong in China. We are glad to have learned what is really going on.” They said that the brutal persecution, especially the CCP's organ harvesting from living Falun Gong practitioners, was horrible. They added that they would tell their friends about it.

A Danish woman said she knew that the CCP suppressed Falun Gong, as the regime tries to control every aspect of society. She said that the traditional values promoted by Falun Gong practitioners are very good and should be cherished. “I feel bad that many governments sacrifice their principles to trade with China. This is wrong, because only righteous belief, and those who have them, will bring hope to our society.”