(Minghui.org) Taiwanese practitioners involved in a project to make phone calls to China held a conference in Taoyuan on June 11, 2017 to share their experiences in talking to people in China to dispel misunderstandings about Falun Gong.

Many Chinese people have said they are grateful that practitioners are able to break through the government censorship to tell them the facts about Falun Gong and how it is being persecuted by the CCP.

Among the comments that people on the mainland have shared with callers from Taiwan, there is often a common message: “I support Falun Gong. Please send me more information and I will help you spread it to others. I am not afraid of the Party.”

Some people were initially deceived by the Party's lies and had misunderstandings about Falun Gong, but they changed their attitude after talking to practitioners. Not only did some start to help practitioners spread this information throughout China, a number of them even started to practice Falun Gong themselves. 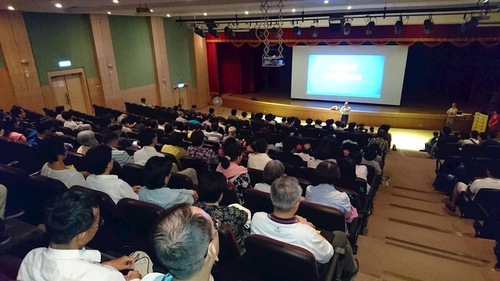 Conference venue in Taoyuan for the recent experience sharing conference among practitioners who make phone calls to China.

Support from All Walks of Life

Practitioner Ms. Hsu said in her experience sharing paper that she always tries to be compassionate to the people she talks to on the phone, no matter what their attitude. She also tries to understand them from their viewpoint.

She has gained a high level of trust from people who have invited her to their online social groups to talk to a larger audience about Falun Gong. A businessman once noticed that she was being attacked on an online forum by people who didn't know what Falun Gong was really about. He stood up and spoke out for her. Later, he himself started to practice Falun Gong.

Another time, a retired government official, whose job was to suppress Falun Gong, talked to Ms. Hsu for a long time. He decided to quit the Party. He said, “I won’t regret it, even if they take away my retirement stipend.”

Ms. Hsu commented, “After learning what Falun Gong really is, many people have started to practice it, including students, businessmen, democracy movement activists, and others.”

From Misunderstanding to Support

Practitioner Ms. Yu shared that a person from Tianjin City, China, agreed to quit the party after talking to her. But then he said, “I don't like Falun Gong because I don't believe in any religion.” Ms. Yu said, “I am not asking you to practice Falun Gong, but you may have been deceived by the Party.”

She then told him the facts behind many of the lies that the Party used to slander Falun Gong, such as the self-immolation on Tiananmen Square. After hearing this, the man agreed the Party’s lies were full of loopholes.

Ms. Yu then showed him the videos about the state-sanctioned organ harvesting of living Falun Gong practitioners. He shouted, “The Party is so brutal!” Then he said he was interested in practicing Falun Gong.

Another man said to Ms. Yu, “I believe you. All we hear in China are negative things about Falun Gong. This is all the communist party's fault. Due to the government censorship, many people do not have access to the truth. Thank you for telling me about this.”

Ms. Yu also said that some people had already learned about Falun Gong and wanted to know more. She once talked on the phone to a man from Hainan Province who said to her, “I want to learn more about Falun Gong. I know your main book is called Zhuan Falun. Can I get a copy from you?” He read the book, and six days later, he contacted Ms. Yu and asked for more materials.

Improving Oneself and Working Well with Others

Practitioners also talked about how they improved during the process of making phone calls to China, and collaborated better with fellow practitioners.

Mr. Zheng works in the IT field. Because of his expertise, many practitioners who were engaged in placing calls to China online asked him for help when they had problems with their computers.

Mr. Zheng used to tell them not to bother him after 10:00 p.m. But later he found that many practitioners did not have time to place any calls before 10:00 p.m. Since many computer problems didn't get resolved, some of the practitioners gave up on this project.

Ms. Huang is a coordinator for the project. She said that she had an attachment to comfort and was only wiling to do the things she liked to do, while rejecting other tasks.

She later saw many other fellow practitioners taking on many difficult tasks, and she realized that she has that responsibility too. She decided to get rid of her selfishness.

Ms. Huang found that once her level improved, her view, and breadth of mind broadened, and she was able to do many things that she had not been able to do before.

“Taking responsibility is the best start towards improving oneself,” she shared.