(Minghui.org) Residents of Aalborg, the fourth largest city in Denmark, had the opportunity to learn about Falun Gong in a free workshop on June 4, 2017.

Falun Gong practitioners held the workshop at the Aalborg Community Center, where they taught the Falun Gong exercises, introduced the benefits of this ancient spiritual discipline from China, and talked about the Chinese Communist Party's (CCP) ongoing persecution of Falun Gong. 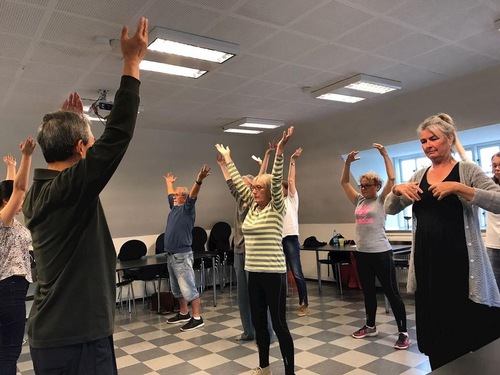 Participants in a workshop at the Aalborg Community Center learn the Falun Gong exercises.

Birgite Andersen and Lene Gronbech were among the workshop participants. They said that they felt refreshed after learning all five sets of the Falun Gong exercises and looked forward to acquiring a Danish translation of the introductory book Falun Gong.

Bente, another workshop participant, had signed up for the workshop because she is seeking alternatives for better health. She and a friend took the class together.

Bente, who used to work for the Red Cross, said, “I completely agree with Falun Gong's principle of Truthfulness-Compassion-Forbearance. The Chinese communist regime must stop the persecution of people who follow this principle. I am aware of the CCP's trampling of human rights.”

Several practitioners shared their experiences in practicing Falun Gong and some talked about the persecution they experienced in China. During the discussion, these practitioners expressed appreciation for the support shown by the Danish government and people.

Raising Awareness of the Persecution in Downtown Aalborg 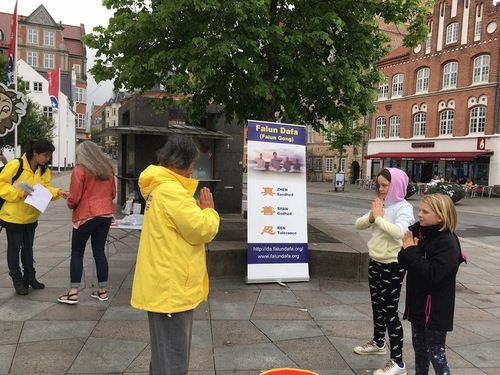 A resident of Aalborg signs a petition against the persecution while two children learn the Falun Gong exercises.

Practitioners introduced Falun Gong in downtown Aalborg and further exposed the persecution in China. Many people were interested in the practice and signed a petition calling for an end to the persecution and China's state-sanctioned live harvesting of organs from prisoners of conscience.

Two young men spoke with practitioners and signed the petition. One of the men, who's girlfriend is Chinese, felt that it was important for his girlfriend to know about Falun Gong and the persecution. He called her from downtown, told her he'd just signed a petition against the persecution in China and asked her to speak with one of the Chinese practitioners. After speaking with the practitioner and learning about the CCP's crimes against its own people, the young woman agreed to withdraw her membership in the Communist Youth League.

At the hostel where they were staying, the practitioners told the person at the front desk about Falun Gong. The person asked them to leave Falun Gong flyers at the desk for other hostel guests.

Then he said, “Falun Gong practitioners are courageous. Facing the CCP's live organ harvesting, they remain steadfast in their belief. They are writing history with their lives.”

After chatting more with the practitioners, he remarked, “The CCP controls people with terror and power. This might control people superficially, but it cannot change people's inner hearts. Falun Gong's principles of Truthfulness-Compassion-Forbearance touches people's best inner character and enhances it. This will make a person better. This is why the CCP is threatened by Falun Gong.”

“Daqing Practitioner Arrested by Police but Refused by Detention Center”

“Five Heilongjiang Residents Tried for Their Faith, 97 More Petition for Their Release”