(Minghui.org) The Edmonton Falun Dafa Cultivation Experience Sharing Conference was held at the University of Alberta on April 30, 2017. Falun Dafa (also known as Falun Gong) practitioners from nearby cities participated. Over 20 practitioners presented prepared talks, sharing their experiences in practicing Falun Gong and incorporating the teachings of the practice in their daily lives.

Starting off the morning session, the moderator read an opening remark expressing appreciation to Master Li, the founder of Falun Dafa, for bearing hardships for disciples and all sentient beings. The reading also encouraged practitioners to treasure the opportunity to study the Fa well, send righteous thoughts and raise awareness of the persecution in China. 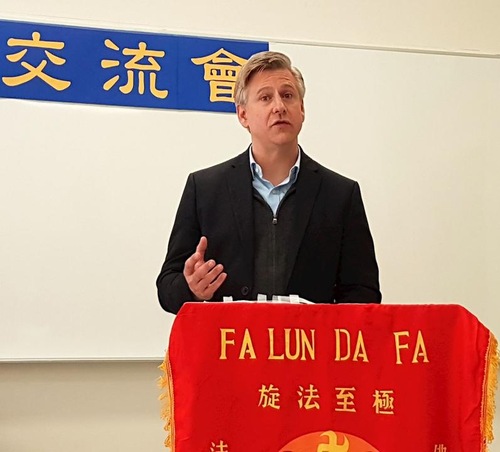 A practitioner shares his cultivation experience on stage.

A Young Practitioner Learns to Look Within

Young practitioner Bo shared, “Some attachments are hard to rid of. I regret it a lot when I repeat the same mistakes. I was determined not to repeat a mistake, but it occurred again as soon as I become complacent with it.

“I realized that the attachments did not want to die. I decided to defeat them, as they are not my true self. I used to be attracted by everyday things and thought I was happy. Actually it was a false manifestation from demons that did not want me to improve my realm of cultivation. True happiness is serene, without any attachment.”

Coordinators Stop Complaining and Look Within

Several coordinators shared their experience in ridding themselves of a mentality of complaining. Practitioner Chun said, “I recognized the problem of complaining, as I saw a former coordinator suffering from the complaining mentality. So I warned myself not to complain when I started doing coordination work. But when the pressure increased, I started to complain while blaming myself for not looking within.

“Later I was able to separate the complaining mentality from my true self and sent righteous thoughts to eliminate it. I was then able to see the shining side of other practitioners and shortcomings in myself.”

Practitioner Ying, in her 60s, shared her story through another practitioner who read her paper at the conference. She had written about her miraculous recovery from a life-threatening highway accident. People at the scene of the accident thought she was dead. However, when she regained consciousness, Ying decided not to go to the hospital, as she was a Falun Gong practitioner.

The entire left side of her body was bruised and her clavicle was fractured. A practitioner comforted her and said, “No problem. You will recover in one month.” Ying said right away, “No need for a month. I will be fine in one week.”

Ying regretted that she did not say a shorter time, as she truly recovered in one week! Due to her righteous thoughts, she went to work three days after the accident.

Other practitioners also shared their experiences in getting rid of attachments to fighting, fear, lust, comfort, etc. Several practitioners expressed that they would cultivate diligently to catch up with the Fa-rectification.

“A Book that Changed My Life”