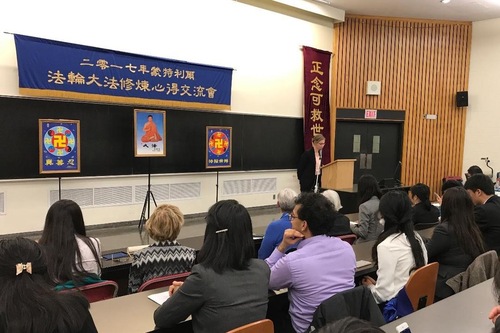 Clarifying the Facts in Chinatown

Mrs. Thanh Nguyen, who is 74, spoke about clarifying the truth in Montreal’s Chinatown. She interacts with tourists from all over the world to tell them about the persecution of Falun Dafa practitioners in China and especially about the Chinese Communist Party's (CCP) organ harvesting from living practitioners.

Many people are very supportive and encourage the practitioners to keep up their great work. Some passersby have been brought to tears as they read the introductory flyers. Mrs. Nguyen greets Chinese tourists in Chinese and tells them Falun Dafa is great.

Some Chinese cursed and made fun of her at first, but as time has passed, more and more Chinese are friendly to her. Some have asked if she is cold, some have told her they know the CCP is wicked and Falun Dafa is good. Mrs. Nguyen and other elderly practitioners in Chinatown always treat everyone with compassion.

Showing Compassion to All, Family Included

Mr. Xue started to cultivate in China in 1996 and personally experienced the persecution. His wife feared the persecution at first. Mr. Xue has kept Master's teachings in mind for the past 21 years and treated his family as people waiting to be saved.

His compassion eventually bore fruit when his wife avoided injury in an accident. She changed her attitude toward Falun Dafa and started to cultivate herself. It made Mr. Xue keenly aware of Master’s profound compassion and reminded him how Master never gives up anyone who has a predestined relationship with Dafa.

Clarifying the Truth Even as Life Changes

Tracy Han started to cultivate with her parents in China when she was a child. She moved to San Francisco and then to Montreal. Then she got married. She went from speaking mostly Chinese to English and later to French.

Despite all the changes in her life, she has never forgotten to clarify the truth.

She found many attachments when she helped to promote the Shen Yun shows. At first, she was concerned some Chinese might miss the opportunity to see the show if they found out there would be a Falun Dafa-related piece in the program. She thought it would be good enough as long as they bought tickets to the show.

However, she was saddened to find out some of them ended up not going to the show. She decided to do a better job with follow-up reminders through phone calls or emails and with eliminating any interference with righteous thoughts.

A Little Practitioner Grows Up

Seventeen-year-old William Jin was born outside of China. He started cultivating with his mother and sister when he was little. He shared his experience of eliminating his attachment to video games and how he now sees that electronics are tools to clarify the truth.

For a school project, he told his teachers and classmates, including those from China, about the persecution of Falun Dafa. He let them know about the CCP's harvesting of organs from living practitioners in China in a slide show. He also collected signatures in school on a petition calling for an end to forced organ harvesting.

William realized he had grown up in Dafa and must fulfill his mission by cultivating diligently.

Everyone at the conference realized the seriousness of cultivation and the urgency to clarify the truth. They said they were grateful for the great opportunity to learn from each other and expressed their determination to work together to help Master with Fa rectification.