(Minghui.org) May 13, 2017, marks the 18th World Falun Dafa Day and the 25th anniversary of Falun Dafa's introduction to the public. Nine Canadian ministers in Alberta sent congratulatory letters to the Falun Dafa Associations of Edmonton and Calgary. 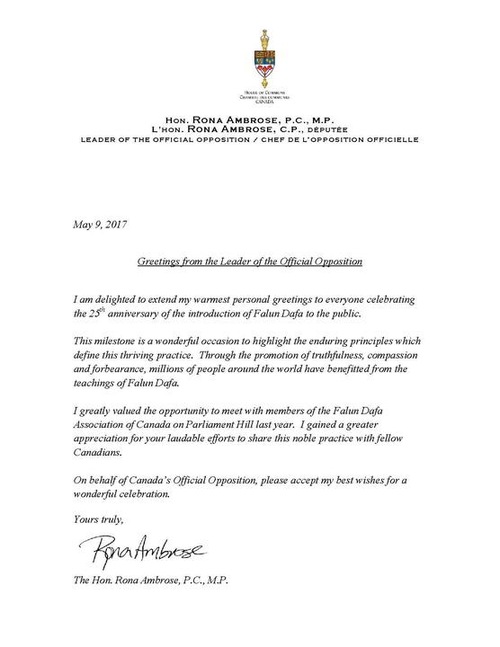 Letter of Greetings from Edmonton MP Rona Ambrose, the Leader of the Official Opposition

MP Rona Ambrose wrote: “I greatly valued the opportunity to meet with members of the Falun Dafa Association of Canada on Parliament Hill last year. I gained a greater appreciation for your laudable efforts to share this noble practice with fellow Canadians.” 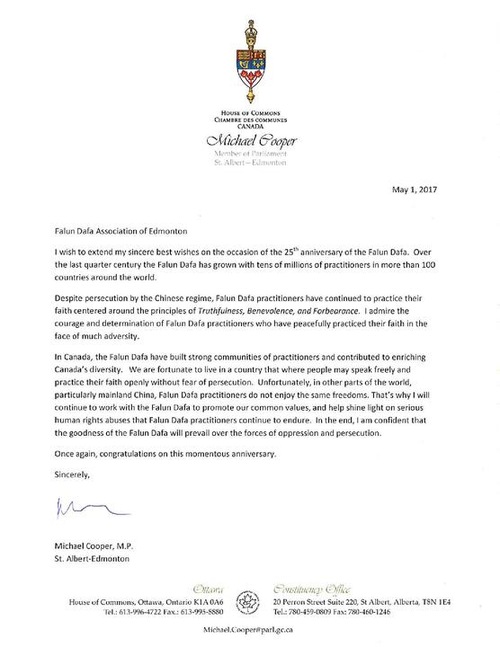 Edmonton MP Michael Cooper wrote: “I admire the courage and determination of Falun Dafa practitioners who have peacefully practiced their faith in the face of much adversity.

“...I will continue to work with the Falun Dafa to promote our common values, and help shine light on serious human rights abuses that Falun Dafa practitioners continue to endure. In the end, I am confident that the goodness of the Falun Dafa will prevail over the forces of oppression and persecution.” 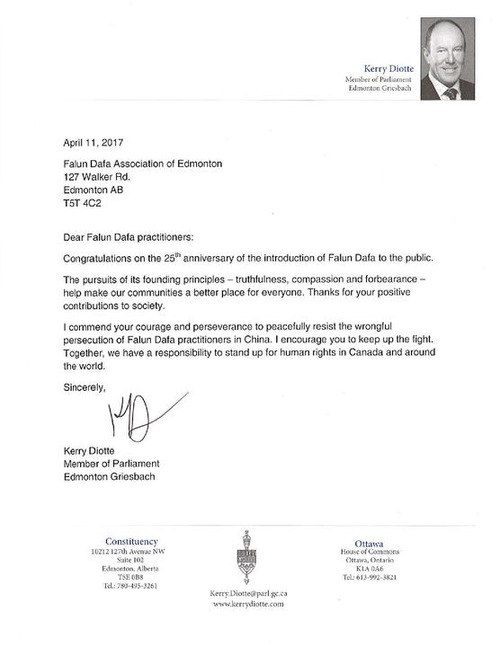 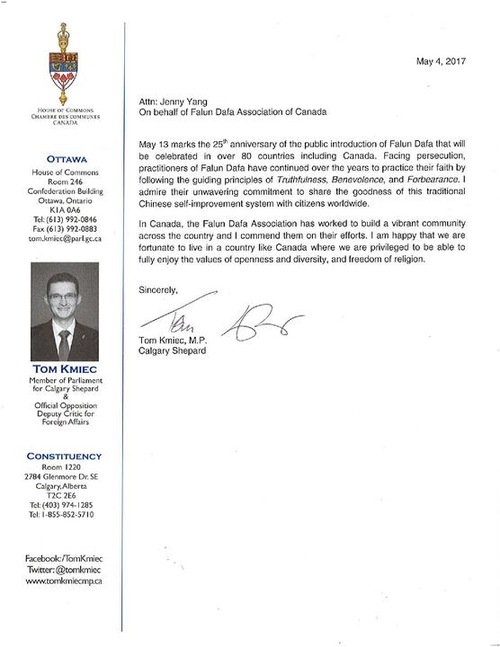 “Facing persecution, practitioners of Falun Dafa have continued over the years to practice their faith by following the guiding principles of Truthfulness, Benevolence, and Forbearance. I admire their unwavering commitment to share the goodness of this traditional Chinese self-improvement system with citizens worldwide,” wrote MP Tom Kmiec. 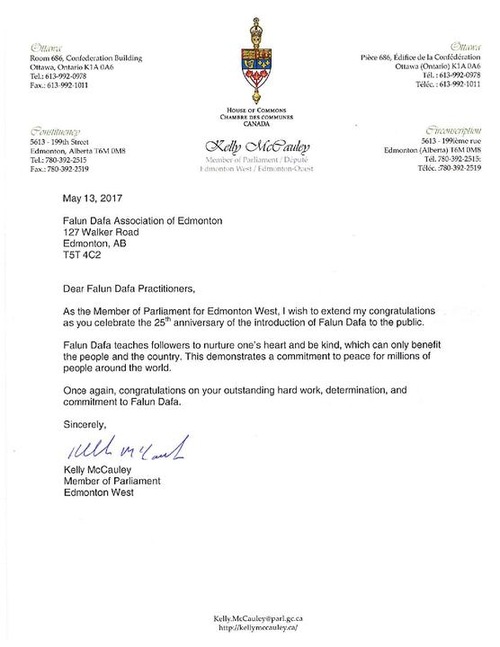 “Falun Dafa teaches followers to nurture one's heart and be kind, which can only benefit the people and the country. This demonstrates a commitment to peace for millions of people around the world,” wrote MP Kelly McCauley. 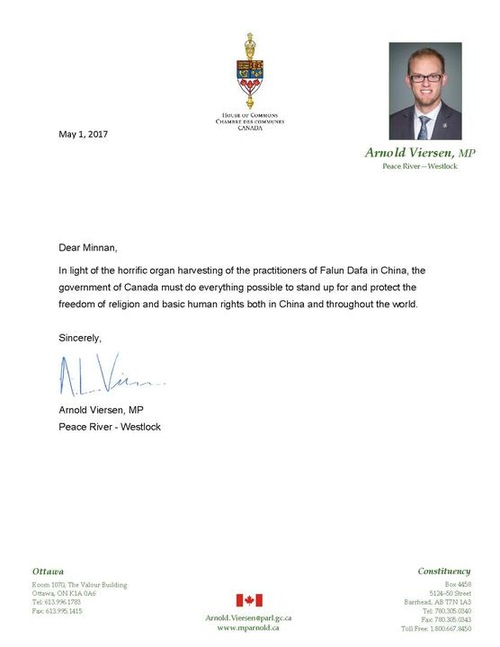 MP Arnold Viersen wrote: “In light of the horrific organ harvesting of the practitioners of Falun Dafa in China, the government of Canada must do everything possible to stand up for and protect the freedom of religion and basic human rights both in China and throughout the world.” 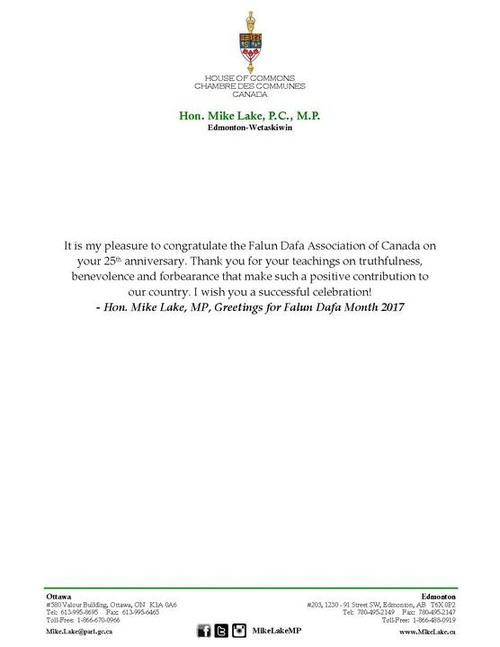 Letter of Greetings from MP Mike Lake of Edmonton-Wetaskiwin

In his letter, MP Mike Lake wrote: “It is my pleasure to congratulate the Falun Dafa Association of Canada on your 25th anniversary. Thank you for your teachings on truthfulness, benevolence and forbearance that make such a positive contribution to our country. I wish you a successful celebration!” 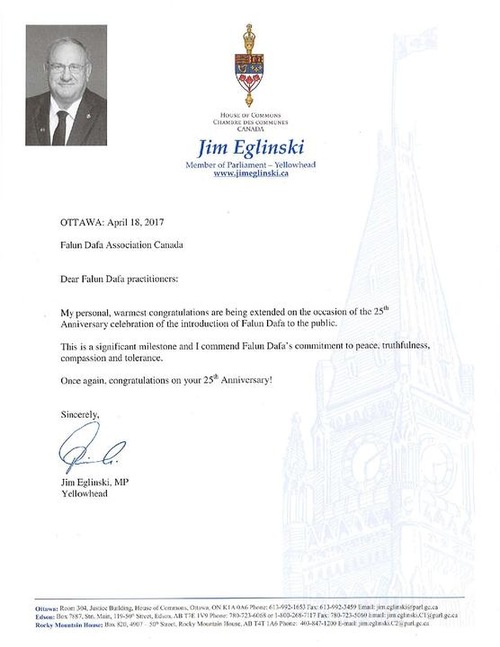