(Minghui.org) Falun Gong practitioners from Georgia, South Carolina, Tennessee, Alabama, and Mississippi came together for an experience-sharing conference in Atlanta on April 23. Twenty-nine practitioners presented articles on their journeys in cultivation. 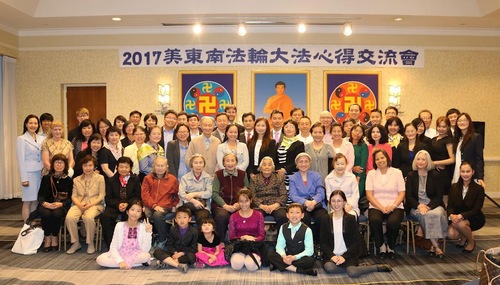 Snapshots of the Conference Speeches

In the process of coordinating Shen Yun promotions, Mr. Sun realized that nothing in cultivation is coincidental. He shared in his conference paper, “When a conflict arises, we often can see the other person's flaws. But this is a chance given by Master for us to see our own attachments, which may be deeply hidden and not easy to detect.”

Ms. Chen talked about a tribulation in which a fellow practitioner criticized her in front of everyone. Her first reaction was: “Thank you, Master, for giving me a chance to improve. I should handle this like a practitioner should, and maintain good xinxing.”

However, she still struggled with it in her mind. Ms. Chen sent forth righteous thoughts for a long time, and tried to calm down. Then, Master's words jumped into her mind, “...just by having your heart unaffected you will be able to handle all situations.” (“Eliminate Your Last Attachments” in Essentials for Further Advancement II). This shook her to the core. She began to truly let go of her fear of criticism and felt the freedom that comes with letting go of attachments.

Tom Nguyen is a college student in Atlanta from Europe. He first learned about Falun Gong in December 2016. After a few months of cultivation and studying the Fa, Tom saw his view of the world and life begin to change. He recognized his negative thoughts and self-protection mentality. The meaning of life is clearer now to him than ever before, he said.

Mr. Xie talked about how he tried to see the positive sides of fellow practitioners, and got rid of his tendency to blame and criticize other practitioners.

Ms. Xu started cultivating in 1996. In recent years, she realized that doing things for Dafa is not cultivation. As a coordinator, one must cooperate with others, and forbear criticisms and difficulties.

By becoming more patient and broad-hearted, Ms. Xu began to do much better in assembling all the practitioners together for Dafa projects.

Ms. Liao, who obtained the Fa in 1995, recalled her early years of cultivation.

“Peacefulness and joy filled my heart after learning the true meaning of life,” she said. “I was able to handle everything calmly, and put down the attachments to fame and money.”

“However, I slacked off after I moved to America. Although the environment is better, and I have the total freedom, I lost the mindset of putting others first. Instead, I began to focus on the shortcomings of other practitioners. I lost the peacefulness in my heart. I could not longer stay calm when conflicts arose with others, and I would often argue with them.”

“I must make a breakthrough,” she said. “I am determined to regain the state I was in when I first started cultivating, improve my xinxing, and truly follow the principles of Truthfulness-Compassion-Forbearance.”