(Minghui.org) Today's news from China includes incidents of persecution that took place in 5 cities or counties in 5 provinces. According to this report, 2 Falun Gong practitioners were subjected to mistreatment during their detention, and at least 5 were illegally arrested. 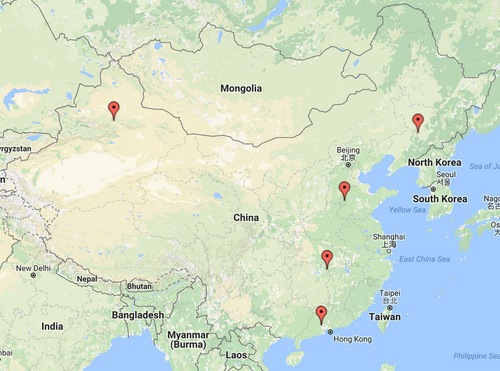 Mr. Zhao, in his fifties, was arrested around March 25, 2017. His home was ransacked, and his computer equipment and other belongings were confiscated.

Mr. Xu Changfeng and his wife Ms. Xu Yan were arrested by officers from the Changji County Domestic Security Division on April 1, 2017. They are being held in the Changji Detention Center.

The couple are from Yongchang County in Gansu Province.

Ms. Yu Qian from the Sanshui District was arrested at her home by officers from the Xinan Police Station on November 19, 2015. She was taken to the Sanshui Detention Center and held there until late July 2016.

She was sentenced to two years in prison by the Sanshui Court.

More than ten officers, including Hu Longbing from the Domestic Security Division and Xiong Linqing from the Tongcheng County Government's 610 Office forced their way into Falun Gong practitioners' homes and harassed them in March 2017. Their residences were also ransacked.

Mr. He Guoao was arrested and taken to prison, but failed the physical exam due to high blood pressure.

Bi Yong from the Tongcheng County Court still sentenced him to two years in prison. Mr. He was examined four more times, but still had high blood pressure.

Bi then forced Mr. He's son to sign a guarantee statement before releasing his father.