Chinese Tourist to Practitioners: “History Will Remember Your Great Deeds!”

(Minghui.org) Falun Gong practitioners in Paris often hold events in front of the Eiffel Tower, introducing this ancient Chinese cultivation practice to the public, exposing the brutal persecution of Falun Gong in China, and telling Chinese tourists the facts behind the regime's crackdown on the spiritual discipline. 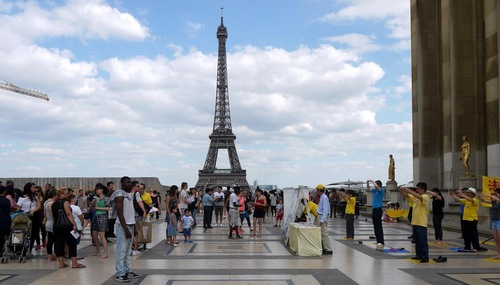 Practitioners demonstrate the Falun Gong exercises in front of the Eiffel Tower.

Many Chinese visitors, who had developed prejudice toward Falun Gong after being misled by the Communist Party's propaganda, changed their minds after talking to practitioners at this well-known tourist spot.

The following is a conversation between a practitioner and a 60-year-old Chinese scholar on March 31:

Practitioner: “Hello, would you like a Falun Gong newspaper? Are you a member of the Communist Party?”

Scholar: “Yes, please give me a copy. And yes, I am a member of the Party, and I am willing to quit the Party.”

“I've been watching your group for a long time, and I heard everything you're telling people. You guys work really hard, standing out here for hours talking to Chinese tourists. Some of them were kind and thanked you, but some were rude, cursing and giving you dirty looks. But you've been smiling at everyone. I can't see any negative feelings on your faces. This is not something that just anybody can do. May I ask—what is your goal? Why are you doing this?”

Practitioner: “Falun Gong practitioners follow the principles of 'Truthfulness-Compassion-Forbearance'. We are not seeking money. All we want is to help people learn the facts about the persecution and take a stance against the atrocities for their own well-being.”

The practitioner went on, “The Party has caused 80 million deaths since it seized power. They have been persecuting Falun Gong for 18 years, and they even harvest organs from living Falun Gong practitioners for profit. We believe that heaven will eliminate the Communist Party for the immense crimes it has committed, and if one still remains a member of the Party, he or she will be in danger.”

With tears in his eyes, the scholar said, “I see. I understand completely. I am a scholar. I have published books and articles praising the Party. They won't let me publish my true feelings, but I have already stopped singing its praises. I know the Party clearly."

“What I've seen here really impressed me. I have a message for Falun Gong practitioners. Please pass it on to them: People know well the insults and torture that the Party has put you through. All your efforts and what you have suffered have not been in vain. This is your virtue. Heaven and earth know it."

“Falun Gong is such an incredible revival of spiritual morality. It is truly great. I can say this: what Falun Gong has been doing is unprecedented in history."

“Please know that, one day, everyone in the world will be proud of you.”

Both the scholar and the practitioner were shedding tears by this point.

“Falun Gong is great. Your Master is great,” the scholar said. “History will remember your great deeds!”

“Elevation in Understanding the Fa Moved Me from Laughing to Crying”

“Discovering the Pursuit of Comfort Behind Various Attachments”