(Minghui.org) Today's news from China includes incidents of persecution that took place in 10 cities or counties in 5 provinces. According to this report, 3 Falun Gong practitioners were subjected to mistreatment during their detention, and at least 13 were illegally arrested. 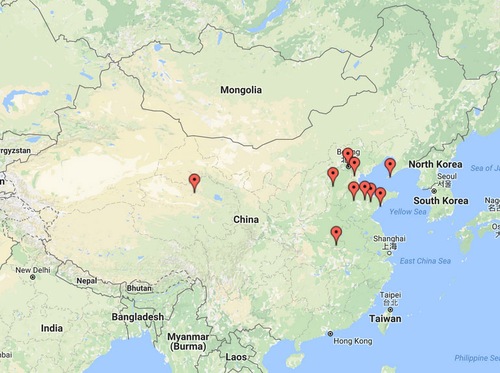 He appealed to the Shijiazhuang City Intermediate Court, and the case was returned to the court.

He was given a three-year-and-four-month prison term in March 2017. The length of time he had already been detained. He was released on April 3, 2017.

Ms. Dong Guiwen was arrested and taken to the Weifang Detention Center on March 7, 2016. She was secretly transferred to Jinan Women's Prison around March 28, 2017, without her family or lawyer being notified.

Ms. Qin Shulan, 69, from Dengshahe Town, Jinzhou District, was arrested on April 22, 2016. She was sentenced to four years in prison by the Jinzhou Court.

Her appeal was dismissed, and she was taken to the Liaoning Women's Prison on March 28, 2017.

Ms. Qiu Guirong and her daughter Ms. Li Qiuju were arrested at their home by officers from the Kecheng District Police Department, Quzhou City, Zhejiang Province, and the Minzhi Police Station, Shenzhen City, Guangdong Province, on the evening of February 16, 2017.

They were taken to the Quzhou Detention Center.

Ms. Qiu was released the following evening. Ms. Li was held for over a month, and was officially placed under arrest on March 24, 2017.

Mr. Han Yuman, in his 60s, was arrested on the afternoon of April 2, 2017, for distributing Falun Gong informational materials near the Shazikou area. His home was ransacked.

Officers from Zishui Police Station broke into Mr. Zeng Zhaobin's home on the evening of March 22, 2017, and arrested him, Mr. Jian Xuefu, and Mr. Li Jiazhi.

They also broke into Mr. He Yuanlang's home and arrested him.

The four practitioners are being held in the Guangshan County Detention Center.

Ms. Zhou Dongdong and a practitioner with the surname Wu were arrested by officers from Qianfoshan Police Station on the morning of April 1, 2017, for distributing Falun Gong informational materials.

Ms. Liu Tao from Langfang City, Hebei Province, moved to her daughter's home in Beijing to take care of her grandchild.

She was arrested by officers from Tiantongyuan Police Station on March 31, 2017, for distributing Falun Gong materials.

Officers from the police station called her family on April 1, and told them that Ms. Liu had been taken to the Changping Detention Center for criminal detention.

Mr. Ding Zhenwen, 66, Ms. Wang Ming, 68, and another practitioner were arrested by officers from Jingzhi Town Police Station on March 25, 2017, for talking to people about Falun Gong at Songguantuan Farmers' Market.

Mr. Ding's family helped to get the three practitioners released that evening. However, the police broke into Mr. Ding's home on the morning of March 28, 2017, and arrested him and Ms. Wang. The other practitioner was not there.

Ms. Wang was taken to the Weifang Detention Center the following day.

Ms. Wang Peiyan's home was ransacked by officers from the Dongli Development Zone Police Station on the evening of March 31, 2017.

“Cooperating with Other Practitioners to Do What Should Be Done”