(Minghui.org) Today's news from China includes incidents of persecution that took place in 8 cities or counties in 7 provinces. According to this report, 4 Falun Gong practitioners were subjected to mistreatment during their detention, and at lease 7 were illegally arrested. 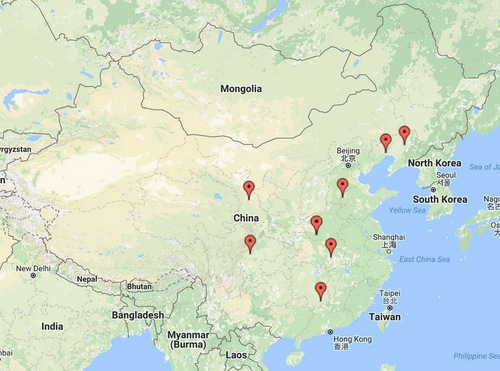 Mr. Zhang Quanshu, 69, and Mr. Ren, in his seventies, were taken to the Beijing Road Police Station by security personnel on March 27, 2017, while they were telling others about the persecution of Falun Gong. Their Falun Gong pamphlets were confiscated. Mr. Ren was released after the police extorted 20,000 yuan from him. Mr. Zhang was held at a detention center.

Ms. Zhou Youping was arrested on the morning of March 26, 2017, for telling others about the persecution of Falun Gong. She is being held at the Deyang City Detention Center.

Mr. Zhou Kewei and his wife Ms. Gu Cuifang were arrested in Mr. Zhou's office on the afternoon of March 20, 2017, by agents from the Linwu County 610 Office, and officers from the Domestic Security Division. The agents and officers searched and took photos of his office. The couple was taken to the 610 Office, where they were forced to write statements denouncing Falun Gong. They were returned to their home at around 8:00 p.m. and watched the home being ransacked. Their Falun Gong books and materials, pictures of the founder of Falun Gong, and three cell phones were confiscated.

Mr. Zhou was arrested again at work on the afternoon of March 24, 2017. Officers from the Domestic Security Division interrogated him in the police department basement, took fingerprints and photos of him, collected a blood sample, and subjected him to a physical exam against his will.

Mr. Pan Xiaomin was taken to the Yangyuan Brainwashing Center on the morning of March 27, 2017, by agents from Wuchang 610 Office and officers from the Wuchang District Domestic Security Division. Mr. Pan works in the Wunan Locomotive Depot of the Wuhan Railroad Bureau. His wife, Ms. Cao Jian, was held for two months in the Yangyuan Brainwashing Center.

Mr. Yu Youzhen from Jingtai County was sentenced to three years by the Jingtai County Court. He was admitted to Lanzhou Prison on March 16, 2017. His family did not receive any notice as required by law.

Mr. Tong Yaoliang from Goubangzi Town, Beizhen City was arrested on March 27, 2017, by officers from the Jinzhou City Internet Monitor Domestic Security Division and the Goubangzi Police Station. The officers confiscated his Falun Gong books and materials, a printer, and a computer. Mr. Tong is being held at the Jinzhou Detention Center.

Ms. Yang Hui and Ms. Guo Qiuxiang were arrested on March 23, 2017 when they were attaching Falun Gong posters. They were held at the Linqing Detention Center.

Ms. Shen Yu was arrested for distributing Falun Gong flyers in July, 2013 and imprisoned for three years in Masanjia Women's Prison. She was made to do forced labor. She had to get up at 6:30 a.m., and sew clothes all day. She frequently had to work extra hours at night, and was not allowed any breaks. Guards scolded her and subjected her to standing punishment when she did not meet the quota. She was also deprived of family visits, phone calls, and talking with others when she refused to write a “thought report.”

When Ms. Li Huiling refused to do forced labor, the guards grabbed her hair, scolded her, locked her in a tiny cell, and shocked her with electric batons.