(Minghui.org) The New Jersey Falun Dafa Experience Sharing Conference was held in central New Jersey on March 4. The 22 practitioners who spoke at the gathering shared their thoughts on the physical and spiritual benefits they derived from the practice, how they studied the teachings and looked within to improve, and how they worked together to tell people about Falun Dafa.

From all walks of life and all corners of the world, some of the speakers had practiced for 22 years while others had just recently begun. 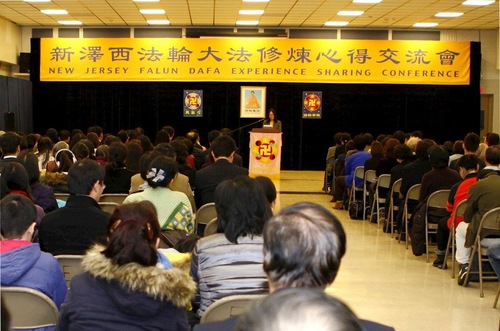 Ms. Xu from Princeton shared her experience of memorizing the Fa. After she realized that the poor state of her cultivation was the result of insufficient Fa study, she decided to set a higher requirement for herself and started to memorize the Fa.

It took her more than four months to memorize Zhuan Falun. During that process, she found that she had not put her heart into it when she studied the Fa in the past. More specifically, although she saw the book with her eyes and read the words with her mouth, her mind was not there. The process of memorizing the Fa helped her understand much more.

A similar thing happened to Ms. Tang from Newark. One attachment she identified was pursuit—thinking that memorizing the Fa would help her understand more. So instead of focusing on understanding the Fa itself, she studied with a strong sense of pursuit.

A recent article on the Minghui website about one practitioner's understanding that studying the Fa well will save more people helped her identify her shortcoming. Until then, her main motivation was to gain something for herself.

Ms. Tang talked about looking inward to improve xinxing. There were always tea leaves in the kitchen sink where she worked and, although she cleaned several times, there were always more. She began to complain. Later she realized that cultivation practice should help us become more considerate of others. Cleaning a sink is something easy to do, so we shouldn’t have any negative feelings about it.

From studying the teachings, Ms. Wang from the town of Bergen realized that whenever she was criticized, she made excuses for herself. Even when she looked inward, she still held onto her own notions to protect herself. As a result, her improvement was limited. She made a conscious decision to clean up her unworthy thoughts and human notions when they surfaced.

Distributing Materials in Front of the Chinese Consulate

She said things worked well and that the language barrier was no a problem for her either. A large number of pedestrians learned the real story of Falun Dafa from her. Because of her swiftness and agility, other practitioners often called her a “swallow.”

The New York Consulate is a crucial place for CCP to slander Falun Dafa in the U.S., and practitioners have maintained a daily presence there for about 15 years. Their perseverance and sincerity have moved many people. Some return to learn more and some who were poisoned by the propaganda stop attacking Falun Dafa.

Working Together as One Body

Ms. Huang from Bridgewater shared how she and other practitioners collaborated recently to promote Shen Yun. Because they were assigned to work in Bergen County over an hour away and would have to walk long distances to distribute pamphlets door-to-door, very few practitioners participated. After group Fa study, they discussed this issue and many practitioners realized its importance.

On Thanksgiving weekend, practitioners in her area went in six vehicles and gave out 3,500 Shen Yun pamphlets in two days. Some practitioners were able to walk so fast it was as if they had supernatural ability. Others chose to come even though they had to carry young children with them. It was a great opportunity to work together and improve together.

Impressions of the Conference

One practitioner who started to practice in 2000 said she learned a lot from other practitioners' sharing. Because work kept her busy, she wasn’t going to group Fa study as often as she used to. Without that group environment, cultivation had become difficult for her. She decided that she would make it a point to do better.

Ms. Zhang reflected on the fact that Falun Dafa was introduced to the world 25 years ago and that Master Li has sacrificed tremendously to give us more opportunities to save people. “After so many years,” she said, “now it is time for us to do our best.”