Copenhagen: Rescuing Two Sisters Detained in China for Their Belief

(Minghui.org) “After over 20 months of detention, my two sisters were each sentenced to a seven-year prison term. This is wrong because they are innocent and should be free,” said Ms. Wei Zaiqun at a March 1 gathering in front of the Chinese Embassy at Copenhagen, Denmark.

Her two sisters, Ms. Wei Zaihui and Ms. Wei Zaixiu, were arrested on May 27, 2015, under persecution for their faith. They both practice Falun Gong, an ancient Chinese spiritual discipline based on Truthfulness, Compassion, and Forbearance. The practice has been brutally persecuted by the Chinese communist regime since 1999.

Their family heard on February 9, 2017, that the two sisters had been sentenced to seven years of imprisonment while Mr. Chen was sentenced to three years. Their request to appeal was blocked by the authorities. “If you plan to appeal, your terms will be longer,” threatened one officer.

Mr. Chen’s mother, who is in her eighties, was left at home with her 12-year-old granddaughter. Mr. Chen hopes to find someone to take care of them. The authorities have several times denied his requests to find a caregiver, threatening, “If the child cannot take care of herself, she will be sent to an orphanage if her grandmother cannot care for her.” 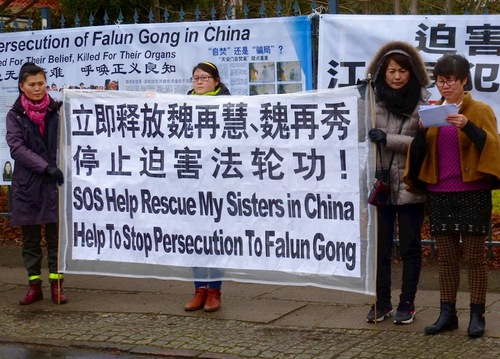 Falun Gong practitioners in Denmark call for a stop to the suppression of Falun Gong in China on March 1, 2017.

With no knowledge of where the two sisters were being held, the family was deeply worried. When Wei Zaiqun, the sister in Denmark, called the police station, detention center, and other government agencies asking for information, she was turned down again and again. “They refused to tell me anything, saying it was not their duty,” she recalled. “Even my mother said little about the situation when I called her because she did not know much and she was scared [of implication by the authorities].”

The family later learned that Zaiziu has been held at the Pi County Detention Center, and Zaihui was at a detention center in Shuangliu County. Because of poor health, Chen Guangzhong was sent home under house arrest, with 24-hour surveillance.

A Family's Efforts to Rescue Their Loved Ones

In an open letter to Chinese President Xi Jinping, read during the gathering on March 1 in Copenhagen, Wei Zaiqun and her husband Jan Eckhausen called for the immediate release of her two sisters and brother-in-law.

“All three of us began practicing Falun Gong in 2006,” Ms. Wei said. Zaihui's hyperthyroidism disappeared and she regained physical strength. She became more open-minded and willing to help others. Her husband recovered from several chronic diseases. Zaixiu's arthritis disappeared and Falun Gong's principles of Truthfulness-Compassion-Forbearance helped her gain a more positive attitude towards life.

“Our experience is testimony that Falun Gong not only benefits practitioners, but also helps society in general. This is very different from the defamatory propaganda [about Falun Gong] that the Communist Party has tried to spread,” she continued.

Zaihui and Zaixiu, the sisters in China, produced printed information to counter the negative propaganda, telling people the facts about Falun Gong and the suppression in China. “And now they are sentenced to prison for seven years. What else can be done to help rescue them?” wonders their sister in Denmark.

“Falun Dafa Made My Brother a New Person”