(Minghui.org) The annual Toronto St. Patrick's Day Parade is one of the city's best loved civic events, with people of all races and nations celebrating Irish history, culture and heritage. This year – 2017 – marks the parade's 30th year, and the March 19 festivities had an especially international flavor with Falun Dafa's Tian Guo Marching Band and waist drum team taking part.

The only group of mostly Chinese members, Falun Dafa's procession was warmly welcomed by the crowds of spectators. Many people learned about the benefits of Falun Dafa, a traditional spiritual discipline from China, and of the ongoing persecution of the practice in China.

The parade, with 5,000 participants, attracted half a million spectators and received a great deal of media attention. 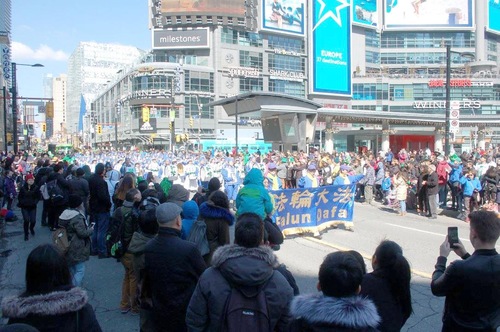 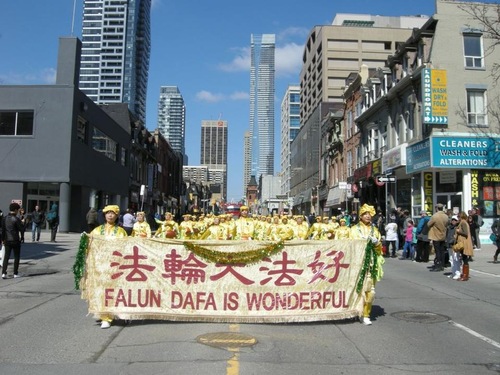 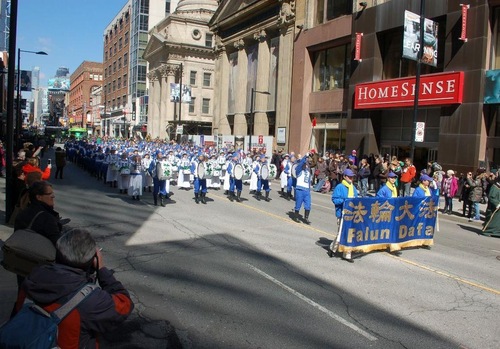 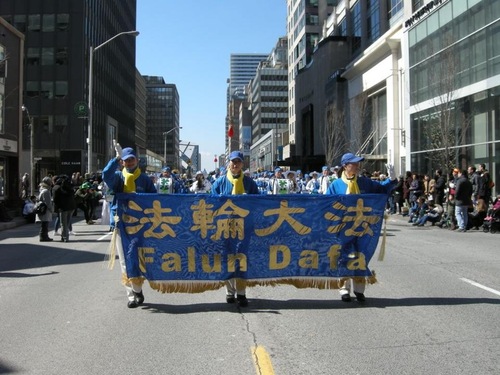 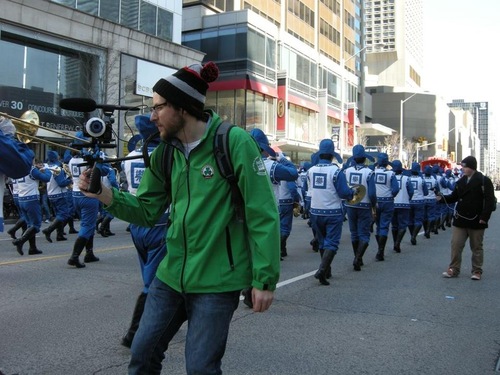 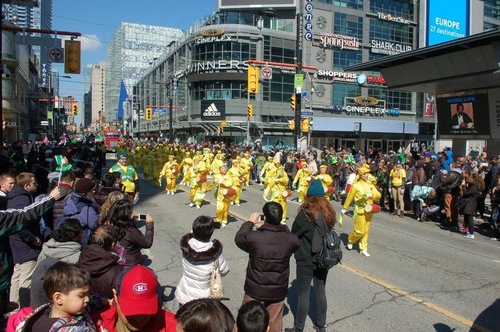 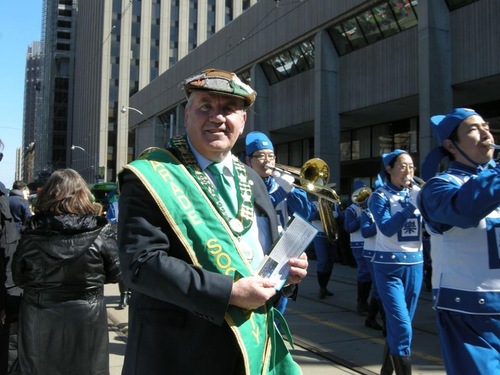 Mr. Shaun Ruddy, chairperson of the St. Patrick's Parade Society of Toronto, has his picture taken as the Tian Guo Marching Band passes the reviewing stand.

Mr. Wyatt Buffolous a parade organizer, was enthusiastic about Falun Dafa's presence in the St. Patrick's Day parade. “The performance was outstanding and I enjoyed the music,” he said. He added that he agreed with the principles of Falun Dafa – Truthfulness, Compassion, Forbearance – and he believes that the persecution of Falun Dafa in China is “unacceptable.” 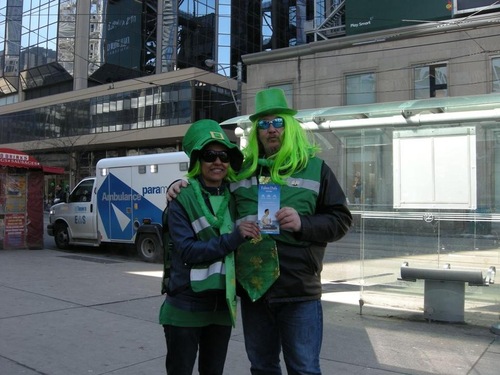 On-duty police officers Kathleen Drummondhay and Enzo Caluori enjoyed the parade. Officer Drummondhay commented on the band's and waist drummers' costumes – “They are so colorful and I love them.” She was very interested in Falun Dafa after listening to a practitioner introducing the principles of Truthfulness, Compassion, and Forbearance. 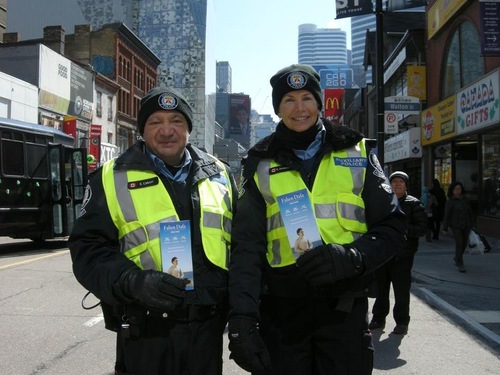 Mr. Ken Dishman, a photographer for CTV, took video footage of the parade. “The music is great and I enjoyed it a lot,” he said. 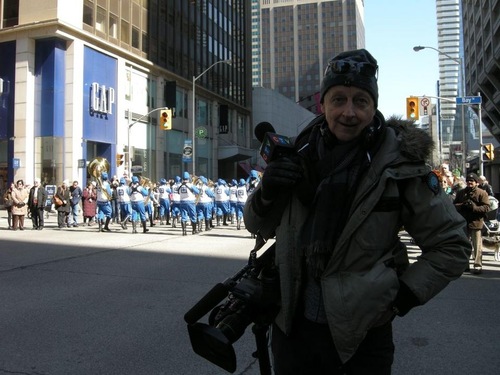 Ms. Vicky Choo and her husband Mr. Cole Kim are from South Korea. Ms. Choo said that the music from the Band was very uplifting. The couple both believe that Falun Dafa practitioners should be free to practice their belief in China. 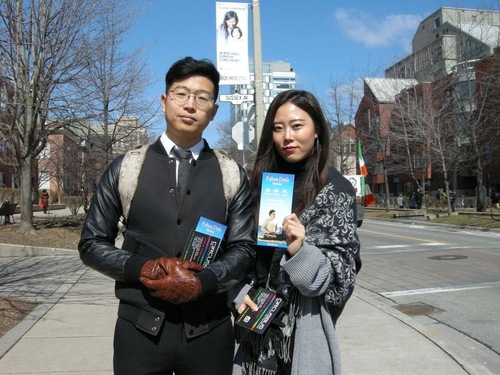 Parade staffer Mr. Mark O'Reilly said that the Falun Dafa procession was terrific. He also believes that everyone should follow the principles of Falun Dafa in everyday life. He supports the practitioners' efforts to bring about an end to the nearly 18-year persecution in China. “I am glad to see so many people protesting the persecution. I support the efforts to bring the main culprit of the persecution, Jiang Zemin, to justice,” said Mr. O'Reilly. 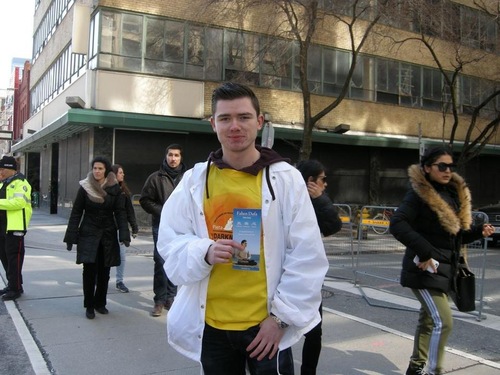 “The costumes of the members of the Falun Dafa procession look very nice and their performance is very moving,” said parade spectator Ms. Allie Pepper-Furray. She was infuriated when she learned that the Chinese regime has been incarcerating practitioners for their faith, and killing them to sell their organs. “They shouldn't be treated this way,” she said. 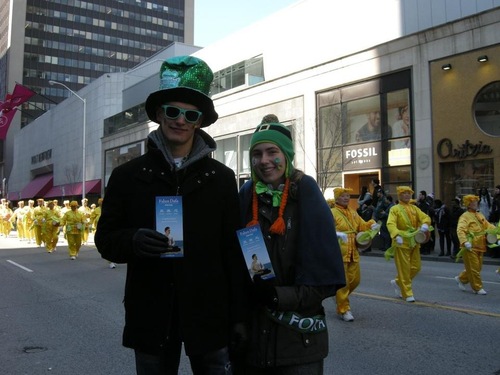