(Minghui.org) “After practicing Falun Gong for three months, I was able to get out of bed, walk around, do some house work, and even go shopping!” These are the words of Elham Heidarzadeh, an Iranian immigrant now living in Toronto, Canada, who once was near death from cancer.

In 2005, Elham, a woman then only in her 30s, was diagnosed with cancer. “Why me? Why is life so unfair,” she kept asking the heavens. She wanted an answer before she died.

After being bedridden for three years, Elham found the book Zhuan Falun on the internet. She downloaded it but didn't read it until a year later, in 2009.

“It was amazing,” she recalled. “After reading one paragraph, I felt that all of my questions were answered.

“I didn't know what was going to happen. All I knew was that I got the answers to what puzzled me,” she said. “This book saved my soul!”

Elham started to learn the exercises following the online instructions. “When the music started, I found the exercise movements so beautiful.”

Too weak to stand for very long, Elham learned the exercises little by little.

“It was really slow at first. I did the exercises once a week and then twice a week. Gradually, I learned all five. And three months later, I was able to walk around and do some work.”

“Once, my then-2-year-old son ran into my room. I was reading Zhuan Falun. He pointed at the portrait of Master Li Hongzhi (the founder of Falun Gong) in the book and said, 'Mom, he put a yellow ball into your belly. I want one, too.' Then he found a picture of the Falun symbol in the book and said, 'It is this ball.'”

“I thought it was just kid's talk, so I didn't pay any attention to it. But later I realized that what he saw, presumably through his celestial eye, was a Falun given by Master Li.

“This experience gave me more confidence. I read the Falun Gong books every day and increased the amount of time I did the exercises little by little. No matter how difficult it seemed, I did them every day.

“Seven months later when I went to the hospital for an exam, the doctors said the cancer was gone! I had become completely healthy. I told all the doctors and nurses that Falun Gong cured me. They were amazed.”

Another piece of good news came shortly after—her whole family were granted immigrant visas to Canada, and they moved to Toronto.

After practicing Falun Gong by herself for almost nine years, Elham finally found a local exercise site. In January of this year, for the first time she participated in group exercises at the Stan Wadlow Club House. 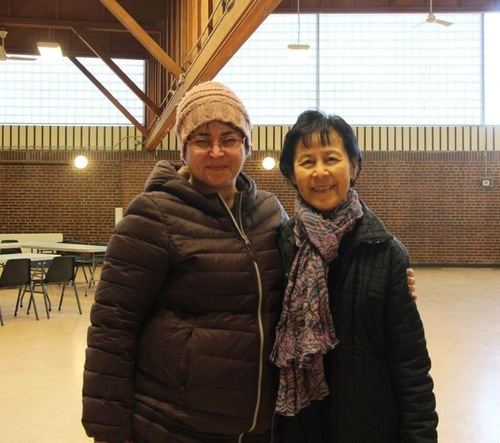 Elham (left) at the local exercise site with another practitioner

“I learned a lot from the group. The other practitioners shared their understandings of the teachings with me, and I enlightened to many principles that I didn't understand when I practiced by myself.

“I felt strong energy field at the exercise site. I came to more profound understandings of cultivation, belief, and interference.”

Once at the group exercise site, Elham had severe pain in her stomach, but she didn't stop doing the exercises.

“I tried to endure the pain and said to myself that I was a Falun Gong practitioner, that nothing could stop me from doing the exercises. Then I started to repeat, 'Falun Dafa is good; Truthfulness-Compassion-Forbearance is good.' I repeated it over and over, and then I heard a voice say, ‘Well done, well done.’ I thought a practitioner was speaking to me, so I opened my eyes. Everybody was doing the exercises with their eyes closed. Then I realized it was Master Li who was encouraging me.

“The encouragement gave me confidence. I kept saying the phrases and doing the exercises. Fifteen minutes later, the pain was gone. I’d made it.

“Since that, I quietly say, 'Falun Dafa is good; Truthfulness-Compassion-Forbearance is good' whenever I run into trouble.”

Elham said that she truly understands what Master Li said in Zhuan Falun:

“I used to complain about the fact that I found about Falun Gong so late and was upset that nobody had told me about it earlier. Now I've stopped complaining. All I want to do is to cherish this opportunity and cultivate well.”

As a student at Seneca College, Elham has shared her experiences with her classmates and teachers.

“There are lots of Chinese students at my school. Most of them were deceived by the Chinese Communist Party's propaganda and had wrong understandings of Falun Gong.

“I told them how Falun Gong and Master Li saved my life but didn't charge me a penny. I told them, using my own experiences, what Falun Gong really is, and why they should not believe what the communist party said. Many of my classmates have now changed their minds.”

“Ms. Chen Hengfang from Zhongyuan Oilfield is Once Again Detained”

“Liaoning Man Tried for His Faith”