(Minghui.org) Today's news from China includes incidents of persecution that took place in 14 cities or counties in 10 provinces. According to this report, 13 Falun Gong practitioners were subjected to mistreatment during their detention, and at least 17 were illegally arrested. 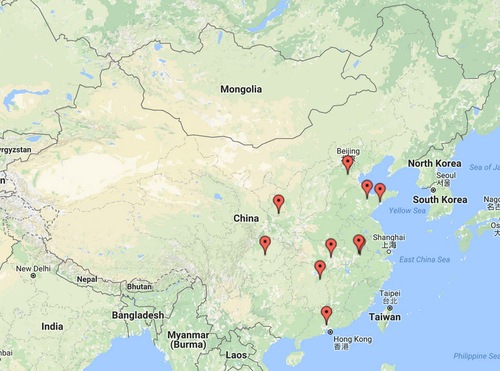 Mr. Zheng Wencai from Shengfang Town was arrested on May 28, 2016. She was tried by the Bazhou City Court on January 9, 2017 and sentenced to five years in prison.

Ms. Yang Peiying was tried on October 20, 2016 and given a three-year prison term by the Yi'an District Court at the end of December 2016. She is at home for health reasons.

Mr. Li Taoyuan and Mr. Wang Jijing were tried by the Jimo City Court on December 21, 2016. The two practitioners were each given a three-year prison term on January 24, 2017.

Both of them were arrested on July 28, 2016. They were held in the Pudong Detention Center for nearly six months.

The Jimo City Court tried Ms. Wang Hua on the morning of January 22, 2017. She was sentenced to 18 months in prison on January 24, 2017. She has been held in the Pudong Detention Center for more than 14 months.

Mr. Han Zhong was arrested and taken to a detention center on the evening of January 16, 2017.

Three practitioners were tried by the Huangpi District Court on August 22, 2016. Mr. Deng Qingcai was given a five-year prison term, Ms. Zhu Yulan was given four years, and Ms. Cao Xiaomei was given three and a half years. The elderly Mr. Deng was recently taken taken to the Fanjiatai Prison. Ms. Zhu and Ms. Cao were taken to the Baofenglu Women's Prison.

Mr. Hu Shunhua from Machong Town was arrested by officers from the No. 1 Village of Zhongtang Town in the evening of January 22, 2017 for distributing Falun Gong materials in Zhongtang Town. He was taken to the Zhongtang Town Police Department and transferred to the Dongguan City No. 2 Detention Center the following day.

Ms. Hu Jinyan was arrested on January 15, 2017 for talking to people about Falun Gong at the Yaogou Town farmers market.

Ms. Guo Suya, Ms. Ju Maixiu, and Ms. Xi were arrested on January 18, 2017 for talking to people about Falun Gong in the Daijialing area. They are held in a detention center.

Ms. Yang Hong was arrested by plainclothes officers from the Guihuaping Police Station in Tianxin District in the afternoon of January 13, 2017. She was held in the Changsha City Detention Center that evening for 10 days.

Three women were sentenced to three years with four years' probation (meaning if they violate probation, they will be subjected to the 3-year prison time) on January 12, 2017.

Ms. Guo Ruizhu, Ms. Xiao Liying, and Ms. Pan Jinrong were arrested on August 12, 2015 for refusing to renounce Falun Gong, a spiritual discipline being persecuted by the Chinese communist regime.

Ms. Pan developed severe health problems while in detention, but Li Yan, a local officer, tried everything possible to prevent her from applying for medical parole. By the time she was eventually released on parole, her health worsened. She spent nearly 200,000 yuan on medical expenses.

Ms. Wang Guihua was seized in October 2015 after she placed a pamphlet about Falun Gong on a police cruiser. The police ransacked her home and arrested her husband, Mr. Wang Meixin, who was printing materials about the persecution of Falun Gong at the time.

The couple were held for one month before they were released on bail.

The local Longfeng Court took the couple back into custody in late 2016 and sentenced them to prison without informing their family. Mr. Wang, 69, was given 4 years; his wife, 68, was sentenced to 5 years.

The police summoned the four practitioners on bail to the court on September 28, 2016. Ms. Zhang was also brought in to face trial.

All five practitioners were sentenced to prison. Ms. Jiang and Ms. Zhang were each given 3 years; Chen Shuyu and Chen Xiaofen were each given 2 years. They are now held at Zouma Women's Prison.

Mr. Wang Dechen was sentenced to 10 years in prison following his arrest on May 6, 2016 for refusing to renounce Falun Gong.

His lawyer entered a not guilty plea during his trial on November 4, 2016. Judge Wang Weichen asked him four times whether he was repentant for his "crime." Mr. Wang said no, and the judge threatened to give him 7-9 years of prison time.

Mr. Wang's wife received the verdict on December 28 and learned her husband had been given 10 years and fined 20,000 yuan. She had to forgo her right to appeal against Mr. Wang's verdict because no lawyer dared to defend his innocence.

She refused to pay the fine, however.

Mr. Gao Yulin, who is serving 4 years in prison for his faith in Falun Gong, has developed severe heart problems and high blood pressure. As the Hulan prison hospital is only able to give him IV injections without further medical treatment, his family is applying for his medical parole.

Seventy-year-old Ms. Fei Shuqin was sentenced to 13 years in prison in 2013. She has been held in the Heilongjiang Women’s Prison. She was diagnosed with fibroids in April 2015. She has also suffered other illnesses as a result of torture.

However, the prison refused to allow her to be released on bail for medical treatment. She is confined in the No. 10 division, where elderly, weak and disabled prisoners are detained.

“Approaching Our Tribulations in Cultivation with Righteous Thoughts”