(Minghui.org) Today's news from China includes incidents of persecution that took place in 6 cities or counties in 5 provinces. According to this report, 5 Falun Gong practitioners were subjected to mistreatment during their detention, and at least 8 were illegally arrested. 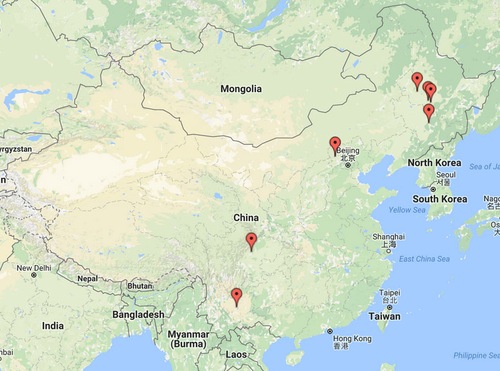 Ms. Luo Yun from the Xiaolongtan Mining Bureau was arrested on August 3, 2009 for distributing Falun Gong materials. She was sentenced to one year of forced labor. She was arrested again in January 2012. Her whereabouts remain unknown.

Ms. Lei Xiuxiang from Yufengxinyuan Residential Community, Fengman District, was arrested by officers from the Dachangtun Police Station, Fengman District, on the morning of July 9, 2015. She had been held in the Jilin City Detention Center. She was sentenced to prison in September 2016. She has been taken to the Changchun Women's Prison.

Ms. Chen Yangbi from Shifang City was sentenced to three years in prison on June 30, 2016 for distributing Falun Gong materials. She was taken to the Chengdu Women's Prison on November 8, 2016.

Mr. Wei Xuwang was arrested and his home ransacked on the morning of January 18, 2017. He is held in the Harbin No. 7 Division.

Three practitioners from the Weihe Forestry Bureau, Shangzhi City, were sentenced to prison during their first trial on January 19, 2017. Ms. Wang Cui'e was sentenced to 5 years in prison, Mr. Su Kun to 10 years, and Mr. Ge Zhenhua to 12 years in prison. The three practitioners were arrested by officers from the Lianghe Police Station and the Yabuli Police Station on June 20, 2016.

Ms. Leng Xiuxia, Ms. Wang Fengchen, Mr. Ai Jiaojie, Mr. Wang Kun, and Mr. Li Liansheng, who are teachers from the Lindian County No. 1 Middle School, were arrested for posting Falun Gong materials in Fuyu County. One of the five practitioners was released. The other four practitioners were placed in criminal detention.