(Minghui.org) Today's news from China includes incidents of persecution that took place in 9 cities or counties in 6 provinces. According to this report, and at least 15 were illegally arrested. 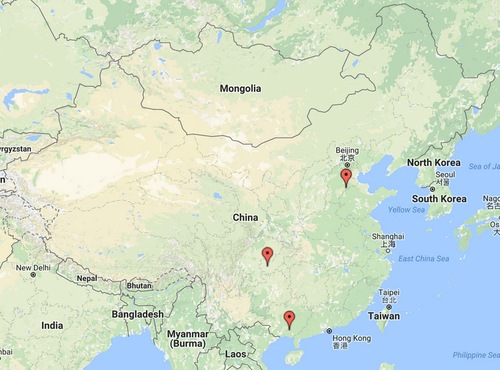 Ms. Zhou Yuelan, 66, a retired worker from the Lingshan County Leather Factory, was reported by her neighbor for watching DVDs about Falun Gong on February 1, 2017. She was arrested by officers from the Lingshan County Police Department and the Xinyu Town Police Station. The officers confiscated all her Falun Gong books, materials, and photos of Falun Gong’s founder. She was taken back home by her son. She is now under surveillance by police.

Ms. Wang Jing from Wangqiansi Township and Ms. Wang Xiuying from Duqiao Township were arrested by officers from the Duqiao Police Station on the morning of February 9, 2017 for talking to people about Falun Gong at a farmers market.

Mr. Chen Jiachuan, in his 50s, from Hechuan District, was reported for using paper bills with Falun Gong information printed on them at the Hechuan farmers market on January 21, 2017. He was arrested and is being held in the Hechuan Detention Center.

Ms. Wen Ying, 54, is a Falun Gong practitioner in Jiamusi City, Heilongjiang Province. She was arrested by officers from Dagushan Police Station on the morning of June 28, 2016 while at her son’s home in Dalian City, Liaoning Province. She has been held in Dalian Detention Center for more than six months. Her case has been submitted to the court in Dalian Economy Developing District.

Chaoyang District Court sentenced Ms. Xiao Lianhong and Ms. Sun Jinxia to two years’ imprisonment in December, 2016. Both of them have filed an appeal to the Beijing No. 3 Intermediate’s Court.

Mr. Wang Xianshu was arrested in Zhenxiong County, Yunnan Province on August 4, 2014. He was charged with distributing informational materials about Falun Gong and taken to Zhenxiong Detention Center.

Mr. Wang was subsequently tortured until he was in critical condition. Guards told his family to pick him up on October 12, 2015. Mr. Wang went back to his hometown in Sichuan Province.

Zhaotong Court of Yunnan Province sentenced Mr. Wang to five years in prison on December 14, 2015. Officers from Lu County and Zhenxiong County went to Mr. Wang’s home on February 8, 2017 and forcibly took him to the Fuji Detention Center, then to the Zhenxiong Detention Center the next day.

Ms. Wang Lei’s two lawyers went to Inner Mongolia Women’s Prison to visit and have her sign an appeal letter on the morning of January 10, 2017. However, the prison refused the lawyers request. The reason given was that Ms. Wang would be denied visitation as long as she maintained her belief in Falun Gong.

The lawyers filed a complaint to the Jail Administration Section to no avail.

Mr. Shan Furong has been transferred to Fanjiatai Prison to serve a 4 year sentence. His appeal is still pending.

Mr. Shan, an employee at Jiangshan Machinery, was arrested in December 2015 for filing a criminal complaint against former Chinese dictator Jiang Zemin for launching the persecution of Falun Gong. His home was ransacked and 20,000 yuan in cash was confiscated. Security officer Zhou Jianwei at Jiangshan Machinery was responsible for Mr. Shan's arrest and home raid.

Ms. Ye Jinyue was arrested at her home in Shanghai on March 15, 2016. She was taken to Sanmen Detention Center. A trial has been scheduled for the morning of March 16, 2017.

Her lawyer went to Sanmen Court and requested to review her case on February 8, 2017. He met with a lot of obstacles, but did manage to get a copy of the case file.

“Power of Dafa: From Bedridden to Independent Living Within Six Months”