(Minghui.org) Kolkata (known as Calcutta during the period of British rule in India) is the capital of the state of West Bengal. Kolkata has long been known for its literary, artistic and revolutionary heritage. The people there tend to have a special appreciation for art and hence, Kolkata has often been dubbed as the Cultural Capital of India or the Literary Capital of India. 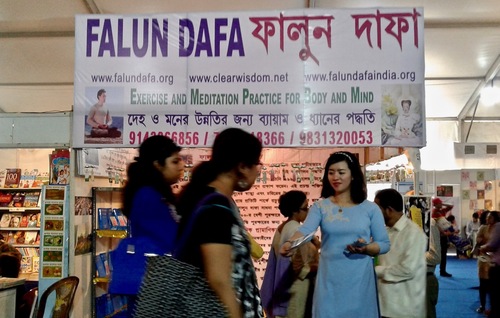 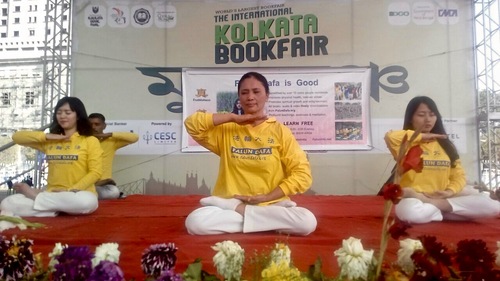 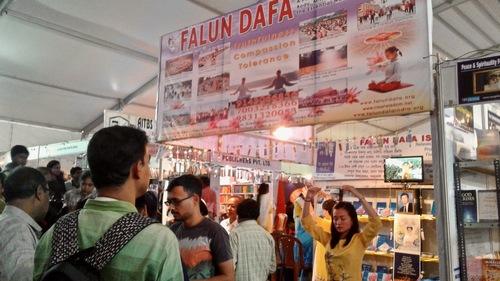 Local practitioners of the spiritual practice Falun Dafa secured a booth for the third year in succession at the popular Kolkata Book Fair. It is the world's largest non-trade book fair, Asia’s largest book fair, and the most attended book fair in the world, with some 2 million annual attendees. The fair offers a typical fairground experience with a book flavor – with picnickers, singer-songwriters, and food courts.

Practitioners in Kolkata were supported by practitioners from Bangalore, Nagpur, and Pune, as well as four visiting from Vietnam and another from Korea. Two of the practitioners from Vietnam who had come last year said they would like to come every year since the Indian people are so pure at heart and accept the flyers readily. They also said that since yoga is popular in India, almost everyone compares Dafa with yoga and therefore they have a big task explaining how Dafa is different.

There was an overwhelming response and the Falun Dafa booth was crowded, with practitioners demonstrating and teaching the exercises and giving out fliers. People from adjacent booths wanted to know why the Dafa booth was always crowded. It was amazing to see people stand and read the Falun Dafa story on the backdrop of the booth. Some elderly people sat at the booth and read the books for some time before purchasing them.

Since the communist regime in West Bengal lasted for 34 years and ended around 8 years ago, elderly people could relate to the persecution of Falun Dafa in China. One elderly gentleman quipped, “Under communist rule for over 30 years, we have seen in West Bengal how the labor was exploited and how so many people were killed. You see communism crumbling all over the world.”

Another gentleman was shocked when told about the Chinese regime forced harvesting of organs from prisoners of conscience and demanded proof. Practitioners asked him to read the Kilgour and Matas report and visit the Minghui website. We provided more explanation and clarification to younger people deluded by the outward success of China’s economic boom.

People were drawn to Falun Dafa books in the local Bengali language and purchased them. Often as we were packing up for the day, people would come back on their way home to buy the books, as if they did not want to miss out on something so precious. Many people who purchased the books came back to buy a set for their relatives.
This year the practitioners adopted a strategy that would encourage all those who purchased Dafa books to also learn the first exercise while they were there. This worked very well, since most of them said they could feel the energy and a sense of lightness, and wanted to follow up on the exercises later.

One family, who had purchased Dafa books last year and taken up the practice, told people how they had benefitted, and encouraged many to buy the books. Some elderly people who purchased the books said that the good translation in the local language made it easier for them to understand. They also said that they were amazed at how their aches and pains had lessened after reading a little bit, and were convinced that the book had amazing power. Many people said they understood and appreciated why we had given them the instructions in writing about guidelines for reading Zhuan Falun.

This year again the police and security staff kept coming back in groups and bringing their relatives. They said they would like to organize exercise demonstrations for their staff members.