(Minghui.org) Today's news from China includes incidents of persecution that took place in 7 cities or counties in 4 provinces. According to this report, 6 Falun Gong practitioners were subjected to mistreatment during their detention, and at least 6 were illegally arrested. 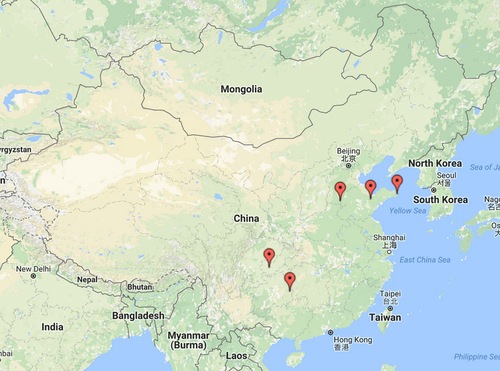 Mr. Zhang Hua was arrested by Yang Fan, an officer from the Gangxi Police Station, on January 25, 2017, for distributing software to circumvent China’s Internet censorship. The officer confiscated his software. He was later released.

Ms. Ni Ruju was sentenced to two years in prison for telling people about Falun Gong via WeChat, a mobile phone app, and suing Jiang Zemin, the former head of the communist regime who initiated the persecution of Falun Gong. She was taken to Jinan Women's Prison on January 18, 2017.

Three officers from the Beimeng Police Station, Changyi City, went to Ms. Li Wenxiu's home in Xiaonanmeng Village to harass her on the afternoon of January 13, 2017. They then went to Ms. Zhou Huifen's home in Danan Village. Ms. Zhou was not at home. They subsequently went to Mr. Wu Jianbang's home to harass him. They also went to Mr. Wu Zhenbang's home and confiscated a cell phone, a music player, a copy of Zhuan Falun, and copies of Minghui Weekly.

Ms. Zhang Xuemei went missing when she was working on an odd job at a privately owned storefront on January 1, 2017. After making inquiries to multiple sources, her family learned that she had been arrested and taken to the Kaili City Detention Center.

A practitioner with the last name Yao, a teacher in their sixties, was arrested by officers from the Nanchuan District 610 Office on January 30, 2017.

A practitioner with the last name Pi, a teacher in their seventies, was arrested on January 31, 2017. Pi was released on bail that day.

Mr. Yang Hunan and his wife Ms. Cui Juan were tried together on July 18, 2016. Their three lawyers argued that there is no law in China which criminalizes Falun Gong, and demanded an acquittal. The couple also testified that Falun Gong returned them to health and taught them to be decent people.

The couple received their verdicts on January 25, 2017. They were each given three years of jail time. They immediately filed an appeal.

The couple remains at the Huangli Detention Center at the time of this writing.

Mr. Chen Yan was arrested while distributing informational materials about Falun Gong at Shuangyashan Farm on September 14, 2016. He has been held in Hongxinglong Detention Center for about five months.

“Neighborhood Committee Party Secretary: “I Will Protect You””