(Minghui.org) Malahide Community School, a high school in a coastal town in northern Dublin, Ireland, has been inviting volunteers from the Falun Gong group for the past several years to teach the exercises to their students.

The school recently arranged all students who will take the college admission exam next year into four groups to learn the Falun Gong exercises within two days. The Falun Gong practitioners briefly discussed the principles behind the practice, and demonstrated the exercises. 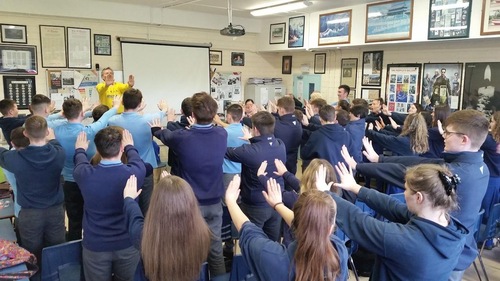 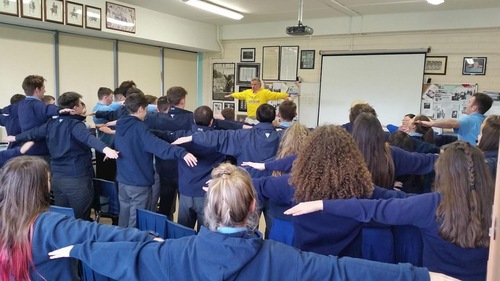 A teacher at the school, John, said he met practitioners while they were collecting signatures on the street to help stop the persecution of the peaceful group in China. He felt that the exercises were very good for the students and hopes the group will return for years to come. 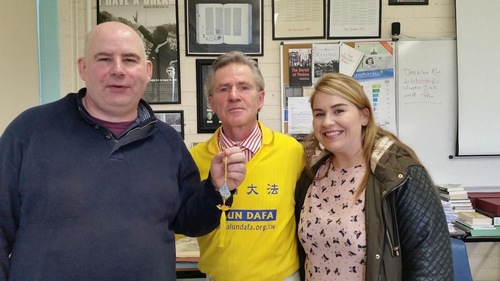 A Falun Gong practitioner with teachers from the Malahide Community School,.

Michael, a practitioner who participated in teaching the exercises at the school for the past four years, said he was happy to do so. The school principal said he appreciated the groups' efforts to help the students.

Falun Gong was made public in 1992 and soon spread across China due to its beneficial effect on health improvement and morality. Nearly 100 million people were practicing it by 1999. Out of jealousy, and fear of losing control of the people, Jiang Zemin, former head of the Chinese Communist Party (CCP), initiated the persecution of Falun Gong on July 20, 1999.

The CCP even conducts state-sanctioned live organ harvesting for lucrative profit. Due to the CCP's information censorship, the exact number of practitioners killed in the persecution is not known.

“Calgary, Canada: Calling on the Prime Minister to Help Rescue Prisoners of Conscience”