(Minghui.org) Today's news from China includes incidents of persecution that took place in 8 cities or counties in 6 provinces. According to this report, 5 Falun Gong practitioners were subjected to mistreatment during their detention, and at least 10 were illegally arrested. 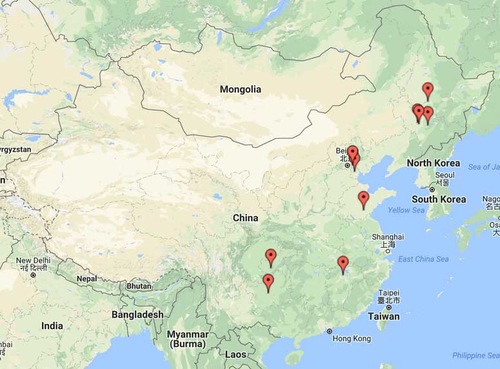 Officers Zhang Musong and Sun Peng from the Lujia Neighborhood Police Station in Nangang District went to Ms. Zhao Xiuzhi's home on the evening of September 24, 2017, and ransacked it. They arrested Ms. Zhao and took her to a detention center, where she was held for 15 days. She was then placed under criminal detention and transferred to a different location by Zhang. Ms. Zhao has since been officially placed under arrest by the Nangang Police Department.

Ms. Pan Yanhua was arrested by officer Gao Jun from the Gexin Police Station on the afternoon of September 21, 2017, for posting Falun Gong informational flyers. Her home was ransacked and she was taken to a detention center. She has been officially placed under arrest.

Officers from the Yongji County Domestic Security Division and the Chengnan Police Station broke into Ms. Jia Guirong's home and ransacked it on the morning of November 9, 2017. Ms. Jia was arrested and detained for 15 days.

Mr. Liu Qingjie and Mr. Li Guojun were arrested and their homes ransacked by officers from the Minkanglu Police Station on September 13, 2017.

Mr. Li suffered an eye-socket fracture from being beaten by the police, and had to be taken to the Xinkang Prison's Hospital.

Mr. Li's wife, Ms. Wang Shuhua, went to the police station to demand his release on October 12, 2017, and was arrested as a result. She was taken to the Weizigou Detention Center and detained for 15 days. On the day of her release, she was taken away by officers from the Songyuan Domestic Security Division.

Ms. Lan Yaqin and Ms. Liu accompanied Ms. Wang's family to the detention center on the day of Ms. Wang's release. They were subsequently arrested by the police. The two women were taken to the Weizigou Detention Center for ten days of detention.

Mr. Zhang Ziyou from Xinlicheng Town in Jingyue Development Zone was arrested by officers from the Fuzhilu Police Station on October 17, 2017. He was sentenced to a six-year prison term by the High-tech Industrial Development Zone Court on November 1, 2017, and taken to the No. 3 Detention Center. Officials at the detention center refused to accept him after he failed to pass the physical exam. He was brought back by the officers and given a ride home two days later.

Ms. Shi Ruixiang from the Yanjiao Development Zone was arrested by officers from the Yanjiaoxicheng Police Station at noon on November 7, 2017. She was released three hours later.

Ms. Bai Fengling from Wangbuzhuang Town is awaiting her trial on November 22, 2017, at the Baodi District Court.

Ms. Bai was arrested by Zhang, Tian Chunyu, and other officers from the Wangbuzhuang Town Police Station on the morning of September 1, 2017.

Ms. Xing Ximei from Andi Township was reported for distributing Falun Gong informational calendars on November 7, 2017. She was arrested and taken to the Linyi Detention Center by officers from the Andi Police Station. She was then taken to a hospital for health reasons.

Ms. Li Zhiying was arrested in October for talking to people about Falun Gong.

Ms. Wang Xinping was an employee of the Yonghong Machinery Factory in Huaxi District. She was arrested by officer Luo Xun and others from the Daxing Police Station in December 2016. The police forced her to write a guarantee statement promising to stop practicing Falun Gong. They also forcibly took blood samples from her. Ms. Wang suffered a mental collapse, and her health deteriorated significantly after returning home. She passed away on July 3, 2017, as a result of being persecuted.

“Master's Fashen is Constantly Protecting Us”