The Spiritual Journey of a Software Developer

(Minghui.org) Santhosh, originally from India, is a software developer in suburban Philadelphia. Until a few years ago, his life was almost perfect: a stable job in a managerial position, a happy marriage, and two lovely daughters. However, a severe illness left him and the family in a hopeless situation. There seemed to be no path forward.

What happened next was surprising. Santhosh has not only gotten rid of the illness, he now leads an even better life and work experience. So what brought about these changes?

On a winter's day in late 2017, Santhosh shared his story–a story both of desperation and joy.

Although born and raised in India, Santhosh's first language is actually English, which made it very convenient for him to work in the United States. His parents cared deeply about him and his life has always been smooth. Santhosh currently works as a manager in a software company. His wife is very capable and takes good care of the family. Their two daughters also bring endless happiness and laughter. “I took regular exercise and ate healthy food. At one point, I felt very good because I was at the peak of fitness. So I had no health issues,” he recalled.

But an autoimmune disease changed all that. Santhosh consulted with doctors but no root cause was identified. In the end, his doctor recommended strong steroids. There would be some side effects and he would be on steroids his entire life, the doctor warned. “The prognosis came like a thunderbolt from the sky. This is because I always thought that I had all the answers for a happy life with friends and family. But when this struck, I became frustrated and dejected,” Santhosh recalled.

Nonetheless, he did not give up, and tried everything including searching online. There were millions of people suffering from the same autoimmune disorder as his. There is no cure and one just has to live with it. “The situation could deteriorate, and in my case, it would affect my eyes. So if I were not careful, I could become totally blind,” he said. To make things worse, Santhosh had already developed pain in his wrists and knees, and was having difficulty lifting everyday objects. “It got to a point where I felt that there was no hope, because I was unable to do any physical exercises,” he added.

Searching for a solution, he began to think deeper about life itself, searching online about God and the universe. “But as I sought spiritually, I was literally lost. I was born in a family that practiced the Hindu religion. Now, I couldn't figure out what was happening and what was going on,” he said.

One day in the summer of 2015, Santhosh talked with a coworker about his health issues. His coworker also had some health issues of his own and he said that he had started to practice Falun Dafa (also known as Falun Gong). Curious, Santhosh asked him for more information about Falun Dafa. His coworker was initially a little hesitant because he had just started the practice himself and he thought that Santhosh might not be interested in the spiritual aspects of Dafa. “On the contrary, I was very interested in it and it was the right moment,” Santhosh said, recalling the conversation clearly.

His coworker gave him a link to the Falun Dafa website (falundafa.org), saying that it provided books and exercises instruction free for downloading. One weekend, Santhosh downloaded the books Falun Gong and Zhuan Falun. “The minute I started reading it, I knew this was something very special,” he said. “It is very clear and it started to explain things, giving me answers to the many questions I had in my mind. So I immediately knew that this was very different [from things that I'd learned in the past].”

Within several days, Santhosh experienced tremendous changes in his health. The pain and discomfort slowly faded away until they were completely gone, as if they never existed. “I couldn't believe it. These are the changes I experienced from doing the exercises on a daily basis. This is first-hand experience–it's undeniable,” he said happily. 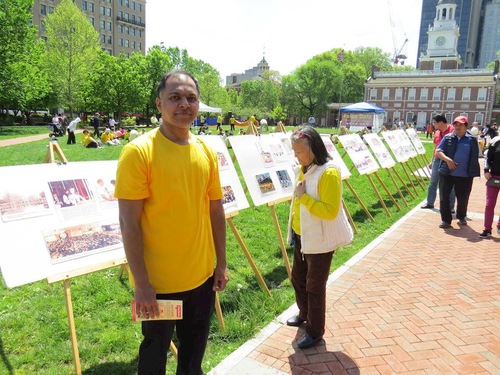 One year after he began practicing Falun Dafa, Santhosh joined the group exercises at Independence National Historical Park in Philadelphia.

As he continued reading Falun Dafa books and doing the exercises, Santhosh gained a broader view on life in general, including the workplace, daily life and family. “My viewpoint changed because the main teaching of Falun Dafa is Zhen-Shan-Ren (Truthfulness-Compassion-Forbearance). What really hits me hard is the purity in the core teachings – you have to be truthful and you have to be compassionate, even if others are angry or insulting you. This is the ultimate thing and it really touches my heart,” he explained.

Therefore, Santhosh found himself no longer easily irritated or angry, becoming much less often disturbed as he had been previously. “I used to be very short-tempered and was an extremely sensitive person. This is all changing and I am now predisposed to be kind to people,” he added.

His parents were living with him at that time, and they both saw the positive changes in him. His father was very impressed, saying that Santhosh was a new and better person.

Like most other families, Santhosh used to have minor or even medium arguments with his wife. He explained, “I used to have this kind of feeling; If I had to do chores around the house such as washing the dishes, I sometimes thought, 'I did them yesterday, today it's her turn to do them. Why should I do the dishes every day?' That is, I thought that everything had to be spelled out like that.” After he started practicing Falun Gong, his thoughts completely changed: “Now, it's no longer that she needs to do it or that it's her thing. Whenever I can help, I will help and just do it.”

His wife quickly noticed this change. She found that Santhosh stopped arguing with her and instead quietly helped get things done. Even if she wasn't doing some other chore, he wasn't complaining. So she asked him about Falun Dafa. After Santhosh explained to her about cultivation of mind and body, she became interested and sometimes read the books too.

His daughters also felt the positive impact of family harmony. Their dad used to get agitated over many things. Now he has become calmer, with more patience. “It seems that you haven't yelled at us for quite a while,” his 8-year-old daughter once commented.

As a manager, Santhosh didn't think that he had major problems in the past. He is goal-oriented, and often told his team the jobs to be done and the goals they had to meet. After he started practicing Falun Dafa, he found that this approach was a bit selfish. “In my heart, I was not caring about my team members. So I was a bit pushy and put lots of pressure on the team to deliver,” he recalled.

Since then, he has become more tolerant and compassionate towards others. In meetings or situations when team members are unable to meet their goal well, Santhosh is not agitated or angry. Rather, he asks what happened, and asks what he or the team can do to help. Seeing him so calm and reassuring, the team members were able to open up and discuss the problems they were facing. “Because I was offering help, such as factoring in personal issues that they are facing, the team's perspective of me changed, and the connection with me has become much stronger,” he said. Sometimes even before he asks them to do something, Santhosh finds that the team already went beyond expectations and delivered the objectives. “One of the team members actually told me that he saw tremendous improvement in my overall management style, especially with meetings and deadlines,” he added.

Such feedback was also passed on to Santhosh's supervisor, who was very happy with his performance and the way employees were so positively connected. “Incorporating the three core teachings, Truthfulness-Compassion-Tolerance, at work, has really created great benefits – not just for me, but for the entire company,” he concluded.

Much Needed in the Society

Not long after learning Falun Dafa, Santhosh heard about the ongoing persecution in China and just could not understand it: Why would someone persecute Falun Dafa, which teaches someone to be a better person, develop higher moral values, and be truthful as well as kind to others? It took him some time to understand the scenario. “It is a real tragedy, because on the one hand you have the positive teaching you to be good; on the other side, you have the negative, or evil, trying to suppress the good,” he continued. “The real victims I see are the Chinese people who are deceived by the communist party with the slanderous, falsified propaganda. I really hope the persecution ends soon and every single person in China will be able to see the magnificence and the truth about Falun Dafa.” 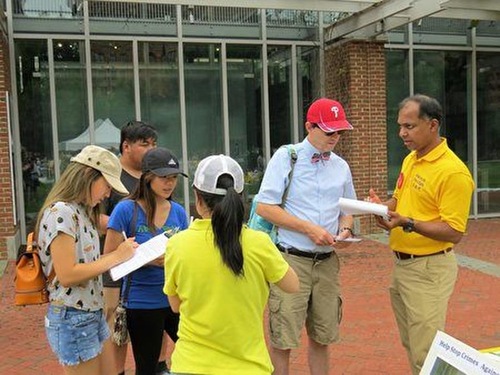 Other than work and taking care of family, Santhosh also comes to local tourist sites to help people learn about Falun Dafa and the persecution in China.

Looking back on the path he has walked, Santhosh said he feels extremely fortunate. “In my experience, I would say that this [Falun Dafa] is the most righteous and straightforward, very simple, yet convenient cultivation practice that I have encountered ever in my entire life. I have been quite a spiritual person and I had been raised in a family with highly traditional values, but I have never come across such an elegant and such a positive, simple way of practice that can take you to a really high spiritual level. It is one of the practices that really benefits your mind and your body.”

He added that there is so much that he could share with people interested in learning about the practice. “In fact, it really helps you to live your life in a complete, wholesome manner, be it in terms of your family, your friends, relatives, work, and everybody else, even strangers. You always present yourself as a very good and kind person, which is a very positive thing.” Because of the huge impact on mind and body, Santhosh believes that Falun Dafa is one of the most righteous practices and is very much needed in today's society.

Santhosh concluded, “I am very thankful from the bottom of my heart to our benevolent Master, Mr. Li Hongzhi, for disseminating the Fa to the public, for spreading it, for explaining the real truth, the purpose of life, and what our path should be.” He said what strikes him the most is the benevolence toward others, “It shows how great this practice is, and how we can move forward. This is something very precious.”