(Minghui.org) A Falun Dafa experience sharing conference was held in Serbia on December 16, 2017 in Belgrade, the country's capital. This was the first time a Dafa conference was held in one of the countries of the former Yugoslavia, which was divided into seven countries after the conflicts of the nineties. Many countries were represented at the conference, including Croatia, Slovenia, Bosnia and Herzegovina, Montenegro, Greece and Austria.

Thirteen practitioners shared their experiences in practicing Falun Dafa, discussing how they improved their character by living in accordance with Dafa's principles of Truthfulness-Compassion-Forbearance. They also shared how they have assisted Master Li (the founder of Falun Dafa) to introduce the practice to more people and in raising awareness of the persecution of the practice in China.

As a new practitioner, Gordana Gosic shared how she detected her attachments to indecisiveness, lust, comfort, fear, and fame. 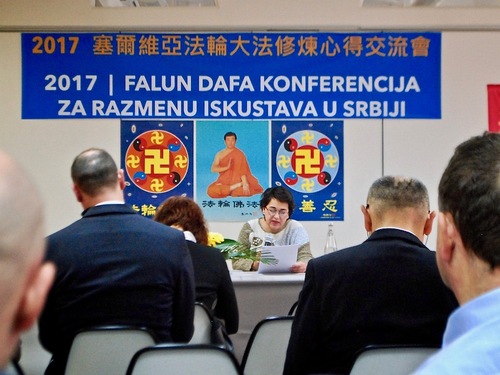 After experiencing what could have been a fatal car accident, Gordana behaved as a Dafa practitioner and was able to pacify the other party. She recalled that the driver, “...stopped, opened the door angrily and started yelling and swearing. He was so afraid of what might have happened. I started shaking with fear as well, but didn’t start yelling or swearing back, like I used to, because I am now a Dafa practitioner. I realized that my fear was fading away, turning into compassion. I felt sorry for this man who'd gotten so angry. So, I just said, 'It's my fault, I’m sorry,' and he went away.”

Marija Vojvodić from Montenegro, a student of the German language and a new practitioner, shared about the obstacles she encountered on her way to gaining a stable environment and how she overcame them.

Marijana Holjevac, a doctor of dermatology from Serbia and a veteran practitioner, shared how she regained momentum after losing her initial enthusiasm in cultivation.

Ioanna Tagari from Greece was the coordinator for the visit of David Matas – the human rights lawyer who exposed the Chinese regime's organ harvesting from Falun Dafa practitioners in China, when he gave a speech at Parliament. She shared her experiences about coordination and cooperation during that event.

Ioanna recalled, “I noticed that I had little tolerance for delays or other practitioners' ideas, as I thought since I'd worked in Parliament before, I knew better than others what needed to be done. I thought I was capable. However, being capable or not wasn't what was important, and I realized that my negative thoughts were an indication of a jealous mentality.”

Theresa Koerpf from Austria shared the insights gained when her son was held in prison. He wrote his mother a letter from prison:

“Things can only get better if everyone looks ahead to the future with confidence just as you did. I'm proud to have a mother like you, who taught me that everything would turn out well only if I had firm faith in Truthfulness-Compassion-Forbearance. Apparently, I can now see it was Falun Dafa that made you stronger and gave you everything you needed. Unfortunately, I didn't understand it until now that I’m in prison.”

Theresa said, “His words made me aware that all my attachments and desires were just like a prison, stopping me from advancing diligently in Dafa cultivation.”

Mira Dozet, from Serbia, shared how she managed to change her character through Falun Dafa cultivation practice. For instance, when she ran into an unkind and unhelpful salesperson in a bookstore, she did not complain at all. The next day when she visited the same bookstore to give a Falun Dafa flyer to the salesperson and talk to her about the persecution of Falun Dafa in China, the salesperson thanked her for her patience the day before. 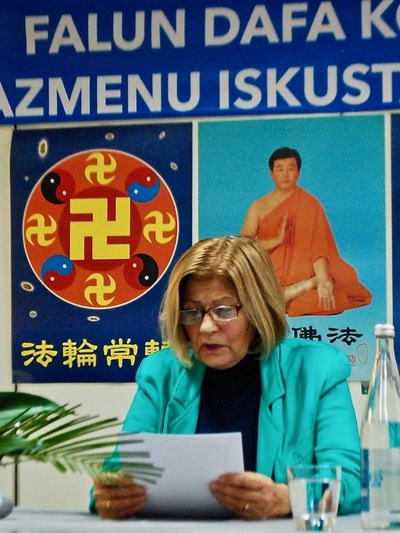 Mira Dozet, a practitioner from Serbia.

Mira replied, “If you had met me before I started practicing and learning Dafa, you would have shown me the door, because I would not have had the patience to search for a book on your shelves. Because of Dafa I had only kind thoughts.”

Olivera Milosevic, an architect from Serbia, shared that she had practiced many different cultivation ways in the past, and how she found Falun Dafa, which cannot be compared with any other cultivation way. She also talked about how she came to realize the importance of only practicing Dafa and not mixing in other practices and habits from the past. 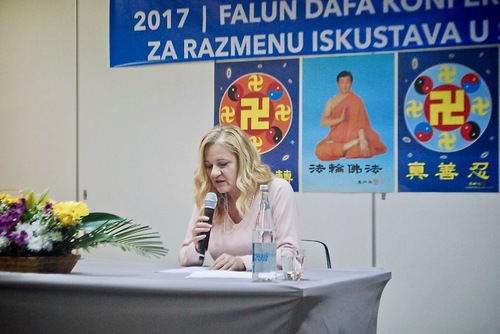 Igor Jancev, a software developer from Vienna, talked about how he introduced the Fa and clarified the truth in Macedonia, another country that was once part of the former Yugoslavia. 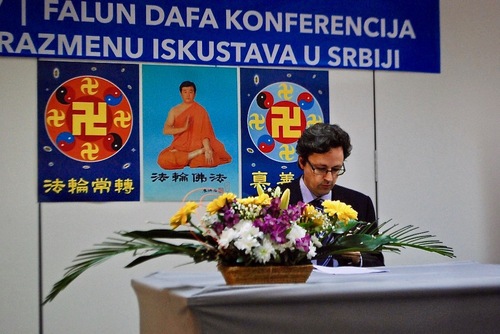 “We arrived in Ohrid, the old city, which some call ‘The Jerusalem of the Balkans,’ built on the shores one of the oldest lakes in the world and in whose surroundings there were once 365 churches. I was thinking about what I could do so that I would not miss this opportunity [to introduce Falun Dafa]. It was Thursday and I decided to organize a Falun Dafa practice in the park from Friday through Sunday from 9:00 - 11:00 a.m. and announce it on Facebook. The next morning, four women from Ohrid came to the park. The day after that, in spite of the cold weather, seven people came to do the exercises. The feedback was very positive.”

At the end of the conference, practitioners agreed that they greatly appreciate Master Li's compassion and salvation. They were also grateful for the opportunity to attend this gathering, where they could learn from each other and be inspired and encouraged. Many practitioners said that they were inspired to step up their efforts to work on their hearts and save more people.