(Minghui.org) Chen Yuchi, the owner of four foot massage shops, came across Falun Dafa as he was searching for ways to help cancer patients. Impressed by the profound teachings, he decided to start practicing Dafa. In addition to spiritual benefits, Chen found that his hives, something that had bothered him for decades, had disappeared.

“Falun Dafa is really great,” he said, “I am truly thankful to Master Li (its founder).”

In the neighborhood where Chen grew up, almost all of his friends became gamblers or gang members, except for him. After graduating from a vocational school, his elder brother introduced him to the dietary supplement business. With a strong interest in folk medicine and qigong systems, Chen successfully opened a foot massage shop at the age of 31.

When planning to expand his business, however, he met with a bottleneck. As soon as he opened the fifth or sixth branches, one of the existing ones would have problems. This was repeated many times, and in the end, he could only maintain four shops. This puzzled him, but he later realized he was too focused on pursuing material interests.

Chen went to volunteer with an organization that provided food for late-stage cancer patients in November 2015. Thinking qigong might help them, he thought about Falun Dafa. To gain a better understanding of it, he went online in March 2016 to read about it.

“When first reading Zhuan Falun, I found this book to be very special and indeed good,” said Chen. Master Li explained everything clearly and covered many topics that Chen had heard of but did not really know anything about.

Because of work and personal interests, Chen has tried various qigong systems in the past. He found Falun Dafa very righteous and was determined to practice it. “Right now, I read Zhuan Falun every day, and I could never give up Falun Dafa,” he continued. 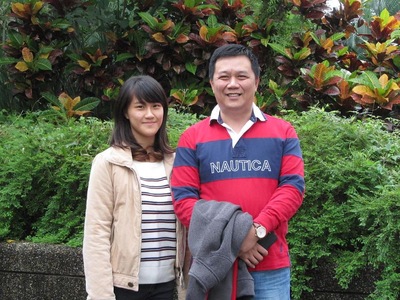 Chen Yuchi and his daughter have both benefited from Falun Dafa.

By looking at things from the principles of Truthfulness-Compassion-Forbearance, Chen has searched within himself for problems, and his viewpoints have changed. “I learned that many illnesses are related to karma. Medicine or qigong cannot solve the real problems. Only Falun Dafa teaches us how to improve our mind and heart nature,” he added.

Chen and his wife used to argue from time to time. After he began to cultivate, he came to understand that the conflicts were opportunities to help him improve. Therefore, he was no longer disturbed, and the arguments became fewer and fewer. The family relationship is now harmonious.

He found a similar change when working with others. “I used to worry about my business every day. Now I am no longer attached to material interests. I am considerate of others and just want to provide a good service,” he continued. To his surprise, he now has more and more customers, and his income has also increased steadily.

The practice of Falun Dafa helped Chen understand many issues, including those he was confused about in the past. “My questions were answered. I also understood that, if something is not yours, it will not belong to you even if you fight for it,” Chen said, “It is like I found the way home.” 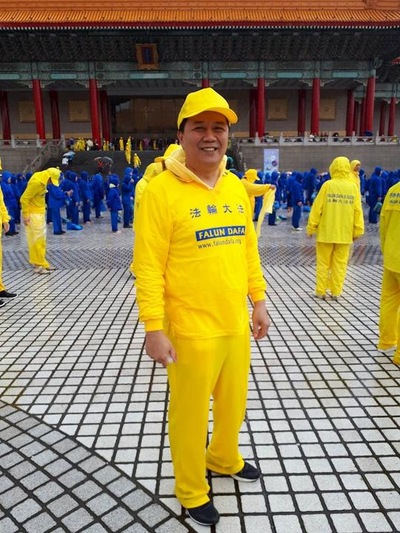 Chen attended a group demonstration of the Falun Dafa exercises and a character formation activity at Liberty Square, Taiwan.

Chen knew chewing areca (from a palm tree) and smoking were bad for his health, but he had the habits for decades, and it was difficult to let go of them. Since he started practicing Falun Dafa, Chen considered these as attachments and was able to get rid of them. His irregular heartbeat and blood pressure also went back to normal.

Another problem was hives, which bothered him since middle school. He felt as if there were countless ants moving around in his body. He felt itchy but did not know where to scratch. Neither Chinese medicine or Western medicine doctors could help with it. These occurrences lengthened and worsened each year. After learning Falun Dafa, Chen one day realized that the hives had disappeared. He was very grateful.

In the past two years, Chen first practiced at home, and later he joined Falun Dafa study and exercise groups with other practitioners. In addition, he often talks with customers about Falun Dafa, how he has benefited from it, and the ongoing persecution in China.

“The communist party defamed Falun Dafa and made hundreds of millions of people lose opportunities to learn what Falun Dafa is,” Chen said, “We have to tell people the facts so they can also benefit from it.”

“Removing My Attachment to Comfort During Chinese New Year”