(Minghui.org) Today's news from China includes incidents of persecution that took place in 10 cities or counties in 6 provinces. According to this report, 8 Falun Gong practitioners were subjected to mistreatment during their detention, and at least 5 were illegally arrested. 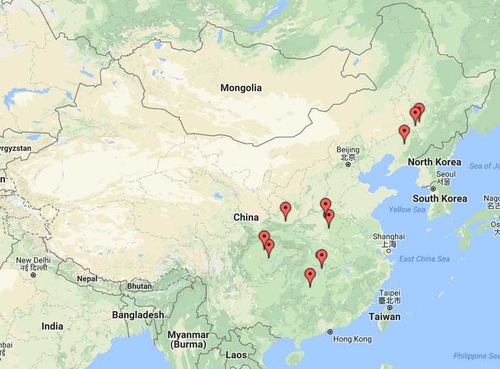 Ms. Cao Yumei was arrested on October 23, 2017. She remains detained in the Gongzhuling City Detention Center.

Mr. Wang Qijia was arrested and his home was ransacked on March 9, 2016. He was detained for ten days.

He was harassed, threatened, and monitored for a long period of time by officers from the Changjiulu Police Station, neighborhood administration officials, and the residential community staff, after he returned home. He passed away on the morning of November 22, 2017 as a result of tremendous physical and mental suffering. He was 71 years old.

His son, Mr. Wang Ge, was sentenced to a three-and-a-half-year prison term. He has been held in the Gongzhuling Prison.

Ms. Jing Huiling is still being held in the Pi County Detention Center, in Chengdu City. She was sentenced to a one-and-a-half-year prison term by the Chengdu High-tech Zone Court in August 2017. She appealed to the Chengdu Intermediate Court. The result of the second trial has not yet been announced.

Ms. Li Zhixiang, 60, was arrested by officers from the Chengbei Domestic Security Division on the morning of November 7, 2017, for talking to people about Falun Gong. She was held in the Zaoshan Detention Center for 15 days. She returned home on November 22.

Mr. Yan Xinliang, Mr. Liu Jingmin, and Ms. Liu Yingchun were arrested by officers from the Xiping County Domestic Security Division in Zhumadian City on May 19, 2017. They were transferred to the Linying County Detention Center after being held in the Xiping County Detention Center for one month. They have remained in custody for six months. They were tried at the Linying County Court on the morning of November 20, 2017. No verdict was issued in the courtroom.

Mr. Du Shengxi from the Baige Residential Community, Zhongyuan District, was arrested by residential community security officers on November 24, 2017. His whereabouts are unknown.

Mr. Ou Zhao'an was arrested at the Guangzhou City Train Station, Guangdong Province. He was brought back to Yueyang City after being detained in the Baiyun Detention Center, Guangdong Province, for one month. He will be tried on November 28, 2017.

Ms. Zeng Dongying was arrested in mid-October. Her whereabouts are unknown.

Ms. Liu Yanping was taken to the Liaoning Women's Prison in April 2017. Li Wenbo, a prison guard with the No. 4 Team, No. 4 Ward, instigated inmates to viciously beat her, deprive her of sleep and meals, and prevent her from using the bathroom for 24 hours, in order to “transform” her. She was often beaten by a group of inmates who were instigated by prison guards. She was also often placed under strict supervision.

Ms. Wang Li, 68, from Benxi City, was beaten and forced to be “transformed” by inmates instigated by Zhao Xiaohong, a prison guard with the No. 3 Team.

Mr. Hu Mingyou was arrested by officers from the Caihong Police Department on the afternoon of November 16, 2017. The officers ransacked his home and confiscated photos of the founder of Falun Gong, Falun Gong books, a printer, a computer, a cell phone, and some cash. He was released after several officers in the police department took turns interrogating him.

“The Paintings Have a Sad Side, But They Also Give Hope”

“Once Imprisoned for 3 Years, Xinjiang Man Sentenced to Prison Again for His Faith”