(Minghui.org) The documentary film Harvested Alive: Ten Years of Investigations was screened in the Slovak parliament on Thursday, December 7, 2017.

About ten members of parliament and five assistants attended the screening, which was sponsored by MP Peter Osuský. 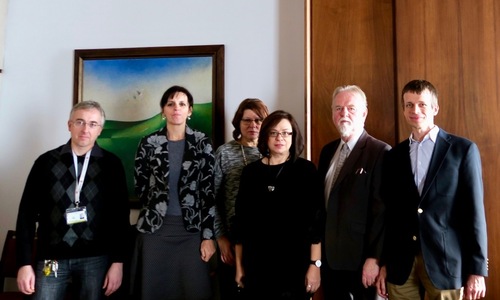 The screening was prompted by a visit to Slovakia by a representative from the World Organization to Investigate the Persecution of Falun Gong in China (WOIPFG) in October. WOIPFG representative Haiyan Wang met with MPs Ondrej Dostal and Peter Osusky on October 26.

After Haiyan Wang presented the conclusions of the WOIPFG investigations on the body exhibitions and live organ harvesting to them, the MPs said that they would welcome the screening of the WOIPFG documentary film Harvested Alive: Ten Years of Investigations at the Slovak National Council.

The screening was scheduled to coincide with Human Rights Day and was sponsored by Mr. Osuský.

After the film, the MPs suggested that more people should learn about this issue, and that they would like to help with its promotion. They posed for a group photo and asked to share it on social media.

As a doctor, Zhiyuan Wang spent 30 years studying how to save lives. He never imagined that he would spend another ten years investigating how Chinese doctors take innocent lives.

The documentary reveals the truth about how China’s hospitals, judiciary, and military worked together under the authority of former Chinese leader Jiang Zemin to slaughter Falun Gong practitioners to harvest their organs.

“Podcast (Cultivation): “Judge: 'Falun Gong Is Good. Practice It Well and Don’t Give Up'””

“Introducing Falun Gong at a Christmas Party in Hiroshima, Japan”