(Minghui.org) Shortly after the 14th China Fahui experience sharing conference on Minghui.org concluded, Australian practitioner Denice Johnson shared how these articles have helped her throughout the years.

“By reading China Fahui articles, I was able to overcome serious tribulations several times, sometimes even on the edge of life and death,” she added. She said it strengthened her righteous thoughts, making her more clear-minded on the issue of illness karma and more determined in cultivation practice.

Denice started to practice in June 2000. “In the beginning, I felt fortunate to find a path that guided me to return to my origin. But as time went on, I found that Falun Dafa offered much more than I expected,” she recalled.

For example, she had incurable chronic pulmonary emphysema from smoking. It miraculously disappeared shortly after Denice started practicing Falun Dafa. She could walk freely without having breathing problems. In addition, she later joined the Tian Guo Marching Band and was able to play the French horn in parades. 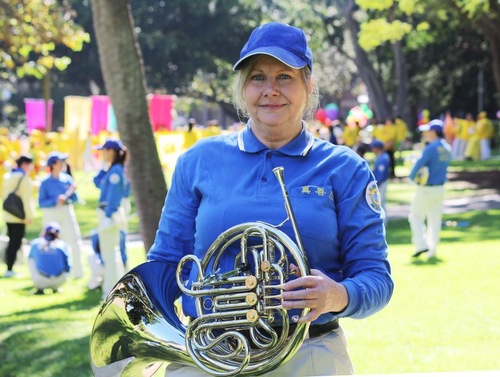 Denice Johnson attends a parade at Hyde Park in Sydney as a member of the Tian Guo Marching Band on May 9, 2015.

While enjoying the physical and spiritual benefits of Falun Dafa, Denice was surprised to hear that practicing it in China could lead to arrest and detention. Knowing that many government officials and ordinary citizens had been misled by defamatory propaganda from the communist regime, she decided to help them get to know the facts about Falun Dafa.

“I traveled with my son Stewart and eight other practitioners to Beijing on March 7, 2002,” she said. After arriving in Beijing, they distributed flyers including information that over 100 million people in 53 countries practice Dafa. After police arrested them, Denice told officers that they went to help Chinese people learn that Falun Dafa is good and that it is well-received around the world.

After the Chinese authorities sent them back home on March 9, Denice and other practitioners held a press conference in Melbourne. Several news media reported on the event, including ABC, channel 7, channel 9, and channel 10. As a result, many people in Australia learned about Falun Dafa and its persecution in China. 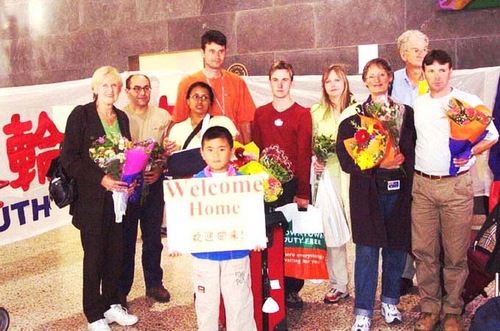 Denice (fourth from right) and other practitioners arrive at Melbourne airport after returning from China.

Since Denice has been to China, she still feels closely connected with Chinese practitioners, especially through the China Fahui articles.

“About 9 years after I returned to Melbourne from Beijing, a doctor diagnosed me with cancer,” she said. In those days, she happened to read an article from the 9th China Fahui that was related to her situation. “I was very excited because I did not know the existence of the China Fahui before then. As a Dafa practitioner, I know Master is taking care of me and guiding me. Reading the stories of others really helped me to identify gaps in my cultivation and catch up,” she said.

In those few years, the illness symptoms came and went, which was difficult for Denice. “Every day I spent lots of time studying the Dafa books. And I also read some sharing articles on a daily basis—they really helped me a lot,” she said with tears in her eyes. Especially when reading China Fahui articles, she felt as if those practitioners were sitting close by and telling her their stories. “It was an interesting and wonderful experience. I truly sensed their existence and their help. And I know all these come from Master's compassionate arrangement and guidance,” she continued.

After finishing the 9th China Fahui articles, Denice went on to read articles from other years. She even printed all of them and stapled them together like books to read them again. From them, she witnessed how practitioners maintained righteous thoughts and righteous actions in the harsh environment in China.

“I also found how righteous thoughts were throughout these practitioners' cultivation,” she said, “They regard Dafa as the most important and have deep faith in Master and Dafa.” This includes their daily lives, their moral character, conflicts, illness karma, or facing guards during detention. Therefore, she found that her own righteous thoughts were also strengthened as she read these articles.

Another thing Denice noticed is that practitioners in China really put their heart into cultivation. “That is, they do not think based on human notions. For example, when talking about illness karma, they referred to it as 'eliminating karma' instead of the detailed medical term of the illness.” She realized that by mentioning the name of the disease, a practitioner is more or less acknowledging it. As a practitioner, one should rely on righteous thoughts instead of human notions.

As she further improved in her cultivation practice, Denice came to understand that her earlier thoughts about the illness were not right, “When I first heard about cancer, I considered that it was trouble that was coming, and I ended up with fear and concerns. When medicine did not work for me, I stopped taking them.”

In Zhuan Falun, Master said, “We have said that good or evil comes from a person’s spontaneous thought, and the thought at that moment can bring about different consequences.” Denice said it is critical for all practitioners to read the Fa more and differentiate between righteous thoughts and human notions. 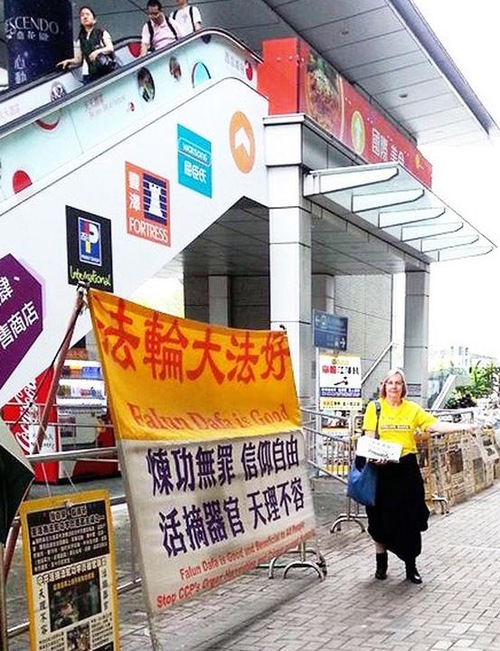 After reading these articles, Denice also learned to make good use of her time. “I study the Fa in the early morning, during lunch break, and after dinner,” she explained. In addition, she sends forth righteous thoughts for half an hour and reads other practitioners' experience-sharing articles. Compared to practitioners in China, she finds life in Australia relatively comfortable with many human distractions. A practitioner should resist such temptations and be fully immersed in the Fa, she said, adding, “This is how I overcame the illness karma.”

At the age of 63, Denice still works full time at the Department of Defence. “The first thing I think of after waking up is to follow the principles of Truthfulness-Compassion-Forbearance. To avoid traffic jams on my hour-long commute, I always arrive at work early and do the exercises. During lunch and tea breaks, I would study the Fa or send forth righteous thoughts. In my spare time, I practice my French horn,” she said.

Denice was also impressed by the seamless collaboration between practitioners. “All these come from our compassionate Master and profound Dafa principles,” she explained. In one China Fahui article titled “Going Through Extreme Difficulties with Firm Belief in Master and the Fa”, the author wrote, “I was determined to walk the path Master arranged for me until the end, as I want to go home with Master.”

“I remember I also said something like that in the past, and I really mean it,” she said.