(Minghui.org) Falun Gong practitioners held a signature drive on Slovakia's National Day on November 17 and the next day in Banská Bystrica, a tourist city in central Slovakia. 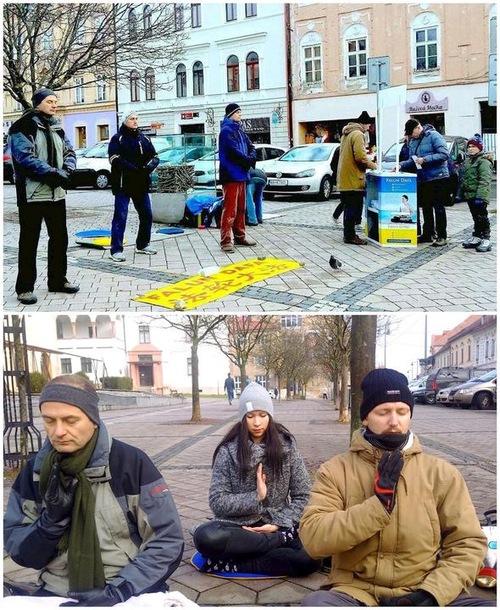 Many passersby were appalled by the brutality of the persecution of Falun Gong in China. "Why are we just now hearing about such a cruel persecution against this group of kind people that has been happening for over 18 years?"--many people had this reaction. Many people signed the practitioners' petition.

Two passersby signed the petition and studied a poster with photos of practitioners who were tortured by the CCP. "They are beautiful and pure souls. No one has the right to treat them so brutally," they said. "The persecutors will be punished by God!" Before leaving, they bowed in respect to the portraits of the practitioners who have been tortured to death for their faith.

A young man signed the petition and took some flyers and petition forms. He said he wanted to let his friends learn about this and sign the petition.

A group of young people were interested in Falun Gong's effect on improving health and achieving inner peace and harmony. They followed practitioners to do the first set of the exercises and asked many questions. Some people who practiced yoga or other forms of qigong were very interested in learning Falun Gong.

Falun Gong was made public in 1992 and soon spread across China due to its many health benefits. Nearly 100 million people practiced it by 1999. Out of jealousy, and fear of losing control of the people, Jiang Zemin, former head of the Chinese Communist Party (CCP), initiated the persecution of Falun Gong on July 20, 1999.

The persecution has led to the deaths of many Falun Gong practitioners in the past 18 years. More have been tortured for their belief and even killed for their organs for transplant operations. Jiang Zemin is directly responsible for the inception and continuation of the brutal persecution.

The CCP is responsible for state-sanctioned organ harvesting from living Falun Gong practitioners for lucrative profit. Due to CCP's information censorship, the exact number of practitioners who have been killed in the persecution is unknown.