(Minghui) The 2017 Mexico Falun Dafa Experience Sharing Conference was held in Mexico City on November 18. Twenty-five practitioners shared how they improved their character by living according to Falun Dafa's principles of Truthfulness-Compassion-Forbearance and how they have assisted Master in saving sentient beings while clarifying the truth and raising awareness through Dafa projects. 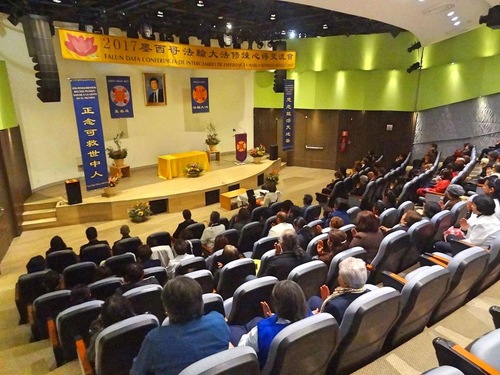 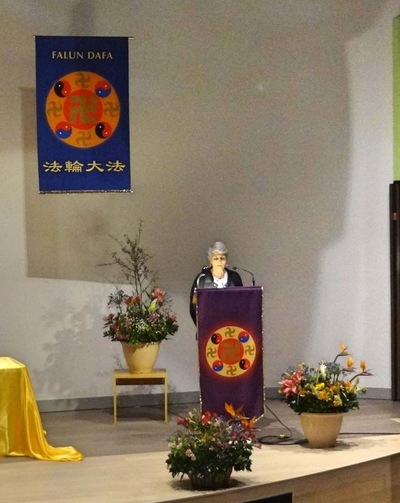 A practitioner presenting her paper.

More than 140 practitioners came from ten cities in Mexico attended the conference and benefitted from the experience sharing. The practitioners felt encouraged in their future cultivation improvement and active involvement in truth-clarification Dafa projects. 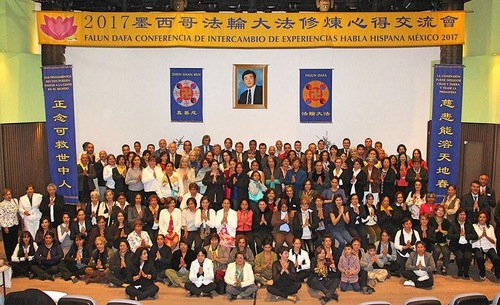 Attendees pose for a group photo to send greetings to Master Li Hongzhi.

Mary shared that her cultivation process had been slow, but the situation changed when she began to collaborate with a University in organizing a demonstration of the Falun Dafa exercises and a truth-clarification event screening the “Human Harvest” documentary. While looking inward, she identified her attachments to fear, comfort, and laziness. After sharing with other practitioners, she was able to remove her attachments, while realizing “It was a great thing for the people from the University to know Falun Dafa and be aware of the persecution.” She now takes hardships with joy and values the precious time remaining to assist Master in saving sentient beings.

She also came to understand more profoundly that before rushing to join many truth clarification projects, she should first solidly cultivate herself. “If we don't change ourselves, if we don't remove attachments and look inward, I think that we won't really save sentient beings.”

Finding the True Mercy through Letting Go of Resentment

Loreli shared how she struggled with her attachment to resentment, but after several years of studying the Fa, she was able to let it go. At work, her boss used to frequently mistreat and humiliate her, until she finally resigned from her job. That was why she resented that person so much.

After she started to practice Falun Dafa and assimilate herself to the principles of Truthfulness-Compassion-Forbearance, she was able to let go of the attachment to resentment, treat her ex-boss in a kind and compassionate way. She discovered that, while following Master's Fa, the attachment was replaced by mercy that truly came from her heart.

Mariana shared a profound experience that put her health in jeopardy and said that only by studying Zhuan Falun was she able to overcome the tribulation and survive. Immediately after, her prematurely born baby lost his life. “That night, after studying the Fa, I understood that Master was arranging my path to enable me to pass this big tribulation. I can say that I started my cultivation path the moment I left the hospital with a weak body but with a deep faith in Dafa... Out of this experience, I was able to overcome the attachment to life and death.”

She has since focused on studying the Fa, cultivating herself well, and assisting Master in saving sentient beings. She also shared that starting at that moment she deepened in her cultivation by identifying notions and attachments she could never see before, which led her to approach her marriage based on Dafa's principles of Truthfulness-Compassion-Forbearance.

Falun Dafa Is the Real Guide

Through his mother, Leonardo had encountered various spiritual practices since childhood and was strongly attracted by the ancient teachings about the true meaning of life. “Although on the surface I appeared to be a pretty positive and cheerful young person, in my heart I felt an unexplained injury, a vacuum, and sadness lurking in me all the time.”

After many years of searching, he found Dafa and was moved by the depth of the teachings he read in the book Zhuan Falun. After passing several tribulations, he recognized and eliminated the attachment of pursuing fame and personal gain, and he understood that Falun Dafa practice requires purity of the heart.

Leonardo also shared how he spreads Falun Dafa in his city and clarifies the truth in order to assist Master in saving sentient beings.

Progressing in Her Understanding and Cultivation

Maria Elena shared how, after she started practicing Falun Dafa, she changed from having precarious health with many ailments to a strong and energetic woman. By studying the Fa, she gradually improved her understanding by finding and eliminating her attachments, understanding true cultivation, and fulfilling her promise to assist Master in saving sentient beings.

She also spoke about how Master's Law Body helped her escape from a very dangerous situation. She had traveled to share Fa teachings in another country, when she was kidnapped and threatened with theft and even rape. Suddenly, from out of nowhere appeared a very well-mannered man in a car, who spoke to the evildoers and took her to her destination. He said that he felt that she was there to do good things. Maria Elena knew that Master had protected her.

Norma knew that Falun Dafa was her cultivation path from the first brochure that she read. After searching for a long time, she became a diligent practitioner. In 2015 she faced a difficult tribulation that involved persistent diarrhea symptoms that weakened her and caused her to lose a lot of weight. Nonetheless she did not lose her faith that Master was helping to eliminate her karma.

“I was reading Zhuan Falun, my righteous thoughts were strong, and I always had in my mind the phrases, 'I'm a Dafa disciple' and 'Falun Dafa Hao'.” She eventually had to be hospitalized and was told she had severe hepatic cirrhosis and had little time left to live. She was becoming increasingly weaker but she didn't stop studying Zhuan Falun.

With much effort she did the exercises and also kept saying to Master, “Master, I don't accept any arrangement that is not yours. It hurts removing illness karma, but thank you for allowing me to repay my karmic debts and raise my xinxing.” She knew that only by looking deeply inward could she let go of her attachments and that her main one was the attachment to life and death. “The answer was to have faith in Master, put myself in his hands, and accept with gratitude what would come. It was a long process of several months, but with Dafa I had nothing to fear.” Norma recovered her health.

Eliminating the Attachment to Fear In Order to Save Sentient Beings

Ivonne shared that, whenever she remembered her childhood, she associated it with fear, due to conflicts between her parents that she had witnessed. She started practicing Falun Dafa five years ago and soon after was hit by a car when she was riding her bicycle.

Although she experienced no fear at the time of the accident, she developed fear afterward, whenever she rode her bicycle near the scene of the accident. Other experiences increased her fear to the point of making her do Dafa work in secret or giving up Fa study when her husband was at home in order to avoid upsetting him. While looking inward she identified her fears, including fear of not fulfilling her responsibilities, physical pain, tribulations, validating Dafa in her home, and acknowledging her errors.

“I realized that I was being persecuted by the old forces, and I had accepted their arrangements. I was determined to reject everything, both external and internal, and began to send righteous thoughts more frequently.”

When her understanding deepened and she managed to overcome the fear, she was able to restore her good cultivation environment.

She spoke about how, as a mother of four children with many duties at home, she could remove the notion of sleepiness by resolutely studying one lecture of Zhuan Falun every day, doing the exercises, and sending righteous thoughts, in addition to collaborating on Dafa projects.

Cultivation Through Life and Death

Laura talked about her older brother's death, the great pain it caused her, and how she identified related attachments while looking within. She discovered the attachment to believing that her identity was sustained by being watched by her elder siblings, as well as the attachment to fearing she would disappear if no one watched over her. She was able to eliminate these attachments but the pain didn't stop.

When she looked inside deeper, she discovered the lifelong competition with her sister to be recognized by their elder siblings, the eldest being her brother. She could see how the pain in her chest was linked to the attachment of wanting to be watched and, at the same time, to the attachment of competition with her sister. By looking deeply within, she identified a chain of attachments and was able to eliminate them.

She also shared her experience of the certainty and the depth of Master's presence when she went to spread Dafa in an area affected by the recent earthquake that hit Mexico City. She realized that by being diligent in assisting Master to save sentient beings, she was closer to him beyond any thought or intention.

The practitioners were touched by the experiences they heard and the solemnity of the Falun Dafa conference that was held in Mexico City for the second time. It also encouraged the practitioners to continue cultivating with more determination and assist Master Li Honghzi in saving sentient beings.

Candlelight Vigil at the Angel of Independence

After the conference, more than 100 practitioners participated in a candlelight vigil to raise awareness of the persecution in China. They gathered at the Angel of Independence, one of the most iconic monuments of Mexico City. 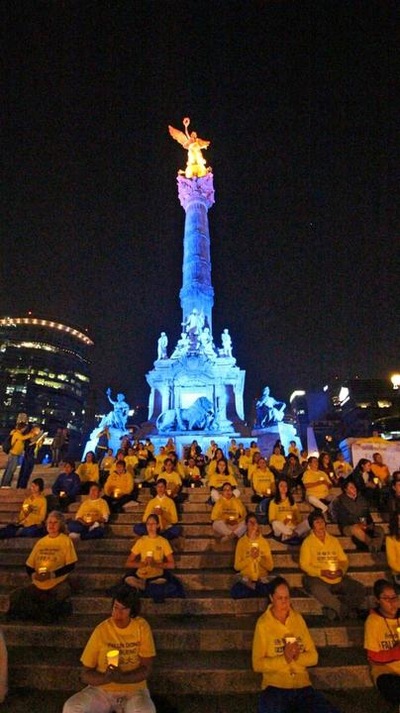 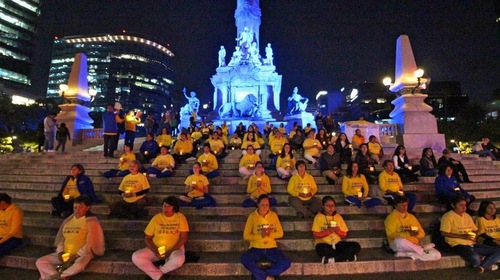 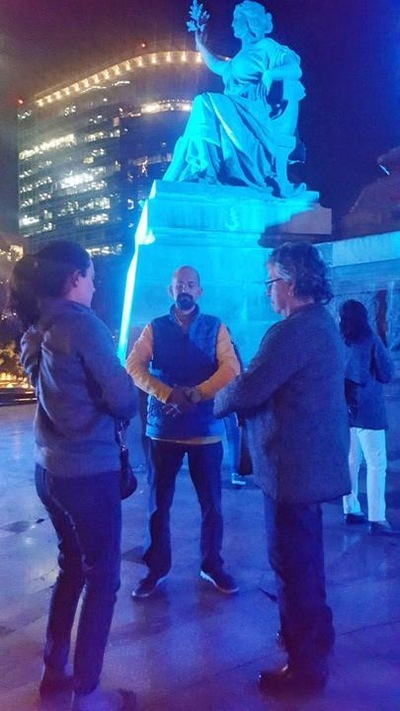 A passerby learns the exercises. 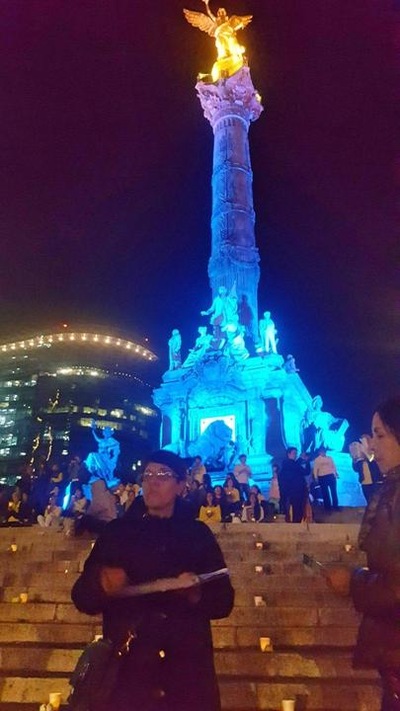 A passerby signs the petition.

Practitioners distributed informational materials to passersby during the event, demonstrated the Falun Dafa exercises, and collected signatures for the Petition to the UN High Commissioner for Human Rights Calling for an Immediate End of Forced Organ Harvesting from Falun Gong practitioners in China.

Upon hearing about the persecution of Falun Dafa practitioners in China, Fabian said. “I didn't know much about this topic. I believe it is very important to be aware of the repression that exists in other countries. I believe the practice you are doing is good, it looks very nice, and it probably goes far beyond that. Introspection is very important and I can see that many people here are meditating. I think many of us need this.”

Evelyn said, “For me, this is really something very shocking. I find it too cruel. I think that we all need this space. There is so much noise, so many things happening in the world, that this meditation does not harm anyone. It shouldn't have reached these limits. It really shocks me and is something that I find hard to believe. We have to unite as societies, as countries, to demand safety and mercy for these people.”