(Minghui.org) Today's news from China includes incidents of persecution that took place in 13 cities or counties in 5 provinces. According to this report, 6 Falun Gong practitioners were subjected to mistreatment during their detention, and at least 18 were illegally arrested. 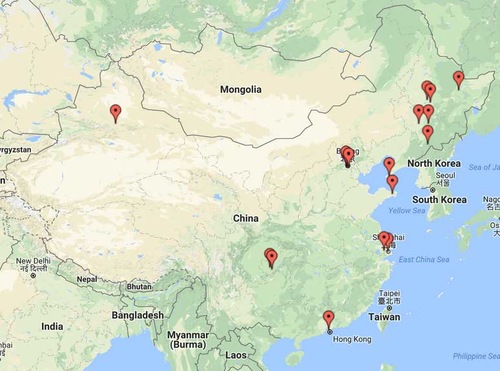 Ms. Hu Yingjie was arrested at home by four or five officers from the Panjiayuan Police Station at noon on October 18, 2017. The officers confiscated Falun Gong books and DVDs. She was held in the police station and the Chaoyang Detention Center.

Ms. Sun Yanhuan was given a three-year prison term.

Ms. Jin Yan was arrested at the Changchun Train Station when she was going to Shenyang City in neighboring Liaoning Province for business on the morning of October 26, 2017. She was detained for seven days.

Mr. Zhu Zhongxue, nearly 70, from Shahekou District was deceived by two police into coming downstairs on the evening of October 22, 2017. He was arrested and taken to a police station. He has not returned home yet.

Ms. Lu Huiwen from Sandaogang Town, Yilan County, was arrested by officers including Zhang Jianhua from the Sandaogang Town Police Station on the morning of October 25, 2017. She was taken to the Yilan County Domestic Security Division for 15 days of detention.

Ms. Dang Yanhua from Changyi District was arrested at Ms. Liu Guihua's home on the afternoon of October 23, 2017. Both practitioners were detained for 10 days. Ms. Dang went on a hunger strike in the detention center. She was shackled.

When Ms. Yan Xiaorong's husband came back home and opened the door, on the afternoon of October 11, 2017, a group of officers from the Tongnan District Domestic Security Division barged in and ransacked the couple's home.

Officers from the Zhengcha Police Station, Jiangyuan District, broke into Mr. Liu Jinsheng and his wife Ms. Gao Yulan's home and ransacked it on the morning of October 24, 2017. The couple was arrested. They were released that afternoon.

Ms. Guo Huaniu, 64, from Changge City, Xuchang City, Henan Province, went to Urumuqi to visit her son in April 2017. She was reported by a taxi driver for using paper bills with Falun Gong information printed on them. She was arrested and her home was ransacked. The police confiscated Falun Gong informational materials. It is not known where she was held.

Ms. Zhang Lijie was arrested at Ms. Zhu Yi's home in the Bagualing area, Futian District, by officers from the Shenzhen City Domestic Security Division on October 7, 2017. She was taken probably to the Nanshan Detention Center by the Nanshan police.

Mr. Zhu Liangshan from Dashi Town went to Mr. Sun Binggen's home in Jinxi Town on October 18, 2017. Mr. Zhu, Mr. Sun, and his wife Ms. Zhang Longjuan were arrested and taken to the Jinxi Police Station. Mr. Zhu's wife Ms. Nie Damei went to the police station to demand the three practitioners' release, but she was also arrested. Mr. Sun was released the following day. The other three practitioners were taken to the Kunshan City Detention Center.

Liang Guanli, Huo Changwang, and other officers from the Beifang Town Police Station, Huairou District, broke into Ms. Liu Xuerong's home in Weili Village, Beifang Town, and ransacked it on the afternoon of October 15, 2017. They confiscated Falun Gong informational materials. Liang took Ms. Liu to the police station that evening. The officers tortured her for 24 hours to extract a confession. They demanded that she sign a document that they'd prepared, but she refused.

Mr. Jin Longtian was arrested about 10 days ago for carrying paper bills with Falun Gong information printed on them.