(Minghui.org) The International Coalition to End Organ Pillaging in China co-hosted panel discussions at two large public universities in San Diego, California earlier this month. The events aimed to raise awareness of China’s massive organ transplant abuses and support a resolution introduced by State Senator Joel Anderson in the California Senate condemning human rights violations in China. The resolution, SJR 10, was pulled from the Senate floor after threats from the Chinese Consulate in San Francisco. 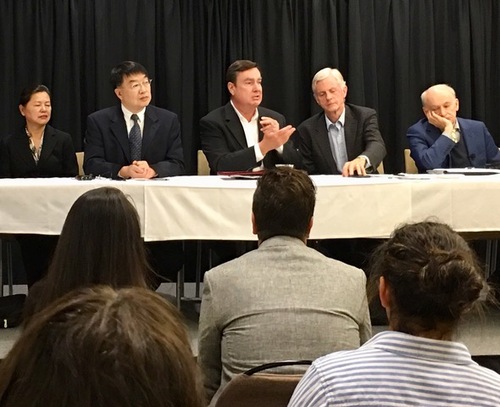 Approximately 200 students and faculty members attended the event at the Parma Payne Goodall Alumni Center at San Diego State University (SDSU) on the evening of November 1.

A second event took place the following evening at the Price Center Theater on the University of California San Diego (UCSD) campus.

They spoke about their investigation over the past decade, in particular, their 2016 updated report which estimates that the Chinese regime is performing 60,000-100,000 transplants per year, as opposed to 10,000 per year, as Chinese authorities claim.

“I was a prosecutor for ten years, so I know something about evidence,” Mr. Kilgour said. “Our investigation found evidence of large-scale organ seizures from unwilling Falun Gong practitioners. Their vital organs, including kidneys, livers, corneas, and hearts, were seized involuntarily for sale at high prices, sometimes to foreigners, who normally face long waits for voluntary donations of such organs in their home countries.”

As a result of the overwhelming evidence of the illicit organ trade in China, Israel, Taiwan, Italy, and Spain have passed laws to stop their citizens from receiving illegally-sourced human organs. In June 2016, by unanimous consent, the House Representatives of the U.S. Congress passed House Resolution 343, expressing concern regarding persistent and credible reports of systematic, state-sanctioned organ harvesting from non-consenting prisoners of conscience in China, including from large numbers of Falun Gong practitioners, as well as Christians, Tibetans, and Uyghurs.

Former Judge in China Persecuted for Her Faith

Ms. Grace Huiying Li, a former judge from China and a Falun Gong practitioner, spoke about her own imprisonment in China.

“Jiang Zemin was very jealous of the popularity of Falun Gong,” Ms. Li said. “He launched the brutal persecution in July 1999, and he declared an order to ruin the reputation of Falun Gong, to bankrupt them financially, and eradicate them physically.”

Her father, a prosecutor, also practiced Falun Gong. Both Ms. Li and her father were sent to labor camps without trial. Her father died shortly after his release from his one-year detention. She herself was held in a labor camp for three years and forced to perform labor for 16 to 17 hours per day.

Women in the prison camp were sexually assaulted with broken mop handles and jagged glass, Ms. Li said. When she confronted the head of the prison guards about the torture that other women were subjected to, she was accused of spreading rumors and was locked in a cage as punishment.

She said, “They handcuffed my arms behind my back and I stood there for seven days and seven nights deprived of sleep. The images of those days are hard to forget. To this day, it still haunts me.”

Ms. Li also said that all Falun Gong practitioners in the camp had their blood tested even though they did not receive any medical treatment after being tortured. Only years later did she realize that the tests were related to organ harvesting.

In his speech, Senator Joel Anderson said, “There are very few issues in our lives that we can stand strong and really make a difference, and standing up for human rights, no matter where they are in the world, I believe is that issue.”

He explained that in July he had introduced Senate Joint Resolution 10, which officially condemns the persecution in China. After receiving bipartisan support in the Senate Judiciary committee, SJR 10 was unexpectedly sent back to the Rules Committee by the Senate leadership after the Chinese Consulate General in San Francisco sent a letter to every Senator, threatening California’s working relationship with China.

Senator Anderson urged the audience to demand that SJR 10 be referred back to the floor for a vote.

“I want legislators to unite and stand against this holocaust, as we have always come together to stand against other genocides,” he said. “That’s what I am going to be remembered for! It won’t be whether I raised your taxes or lowered your taxes, or fixed your roads or didn’t fix your roads. It will be because I stood on the righteous side of humanity! And so I am asking people, if you agree with me, sign this petition to support our resolution. If you sign up and support, my colleagues will see there’s great momentum for this.”