(Minghui.org) Today's news from China includes incidents of persecution that took place in 12 cities or counties in 6 provinces. According to this report, 8 Falun Gong practitioners were subjected to mistreatment during their detention, and at least 20 were illegally arrested. 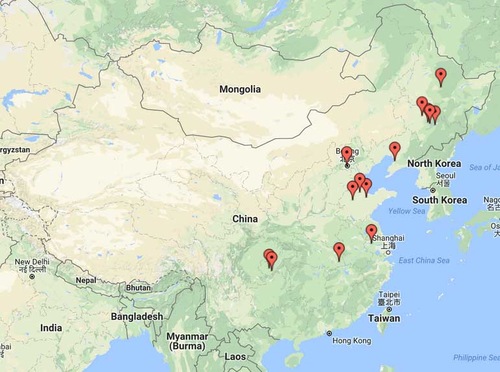 Ms. Shen Huiqing, 80, was followed and arrested when she was talking to people about Falun Gong on the morning of October 23, 2017. One person she talked to was a plainclothes officer. She was taken to the Sipailou Police Station in Jingkou District, where she was body-searched. The police took her keys and ransacked her home. They confiscated Falun Gong books and some cash. She was taken to the Zhenjiang City Detention Center that evening.

Mr. Li Chunsheng and his wife Ms. Dou Shufen were arrested as soon as they stepped out of their home on the morning of October 23, 2017, by plainclothes officers who were staked out there. The officers were from the Chang'an Neighborhood Police Station. Their home was ransacked. The officers confiscated between 40,000 to 60,000 yuan in paper bills with Falun Gong information printed on them. The couple's whereabouts are unknown.

Ms. Wang Shuqing and Ms. Yan Shuqing were arrested at home by officers from the Minzhu Police Station on October 23, 2017. They are being detained.

Officers from the Chuanying District Police Department and the Domestic Security Division arrived in several dozen police vehicles at Xiakouzi Village, Huanxi Township, on the evening of October 15, 2017. They arrested all the practitioners in the village. Those who were harassed included Mr. Li Haichun, Ms. Li Haiying, Ms. Jiang Li, and Ms. Fang Shuqing. One practitioner was detained for five days. The other practitioners were released.

Mr. Liu Xiang, in his sixties, from Yuejin Village, Shuangfeng Town, Tieli City, left home with his wife to avoid being persecuted in 2012. They found a place to live in Dongliu Village, Xiliu Town, Haicheng City, Anshan City, Liaoning Province. Several plainclothes officers went to their home at noon on October 23, 2017 and arrested Mr. Liu, who was at home alone.

Ms. Ling Dan was arrested when she stepped out of the residential community door by four plainclothes officers on the morning of October 11, 2017. The officers searched her bag and confiscated several cell phones, USB flash disks, and TF cards

Ms. Zhang Wenyun, Ms. Jin Yuxia, Mr. Meng Zhaoyi, and Ms. Diao Fengqin were arrested when they were studying Falun Gong teachings together on the afternoon of October 24, 2017. Ms. Zhang and Ms. Diao were released. Ms. Jin and Mr. Meng were detained for 15 days.

Ms. Yang Guihua's home in Yingli Town was ransacked on the afternoon of October 24, 2017.

Ms. Zhu Jinchun was arrested at home on October 17, 2017. She is being held in the Daxing Detention Center.

Ms. Zhang Baolian from Qizhou Town was arrested at home by five Qizhou Town police officers on the evening of October 17, 2017. She was taken to the Xishui County Detention Center that night.

Ms. Zhu Huiqun and her sister Ms. Zhu Huijie were arrested at a rented home in the Zhangjiawan area of Shapingba District by officers from the Chengkou County 610 Office on October 16, 2017.

Officers from the Binzhou City Anti-Riot Brigade and the Shixi Police Station broke into the homes of Ms. Su Cuirong, Ms. Liu Guifang, and Mr. Wu Baohua on October 22, 2017, and arrested them. The officers confiscated all of their Falun Gong books, printed materials, and cell phones. The three practitioners are being held in the Binzhou City Detention Center.

Ms. Qi Yanming was arrested at home by officers from the Tongjiang Police Station on the evening of October 23, 2017.

Mr. Cheng Yankai was arrested by Mu Deqiang, head of the Gaizhou City Domestic Security Division, and Ren Chang, director of the Tuandian Police Station, on October 11, 2017. He was taken to the police department, where he was interrogated. His cell phone and personal belongings were confiscated.