(Minghui.org) Falun Gong practitioners in Denmark participated in Copenhagen's Mysterious Universe Expo on November 3-5, 2107. The expo presented a rich variety of topics, including traditional culture from different countries, along with folk art, spiritual practices, lectures, and concerts. The expo hosted 115 booths, and 60 lectures were offered by various participants. Falun Gong practitioners offered two lecture sessions introducing the principles and exercises of Falun Gong. They received warm feedback from the audience, and many people learned the exercises on the spot. 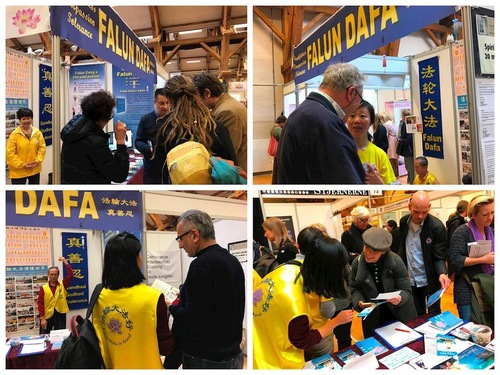 During the expo, a video of the Falun Gong exercise instruction was shown continually at the Falun Gong booth. Some practitioners demonstrated the exercises, some distributed brochures, and some talked to people about the Chinese Communist Party's persecution of the practice in China.

Many people could feel a unique energy field around the booth, and couldn't help stopping to learn about the practice. Some bought the Falun Gong books and attended the introductory lectures. Some even made a special trip the next day to go to both lectures. A young man who was interested in cultivation practice talked with a practitioner for ninety minutes about the traditional Chinese cultivation practice.

One lady who had visited China said that the Tiananmen Massacre had been sitting heavily on her mind. She knew the wicked nature of the persecution of Falun Gong. She couldn't agree with her government's focus on economic interests while remaining silent on the human rights violations in China. She said she wished Denmark would say “no” to China's persecution of Falun Gong. 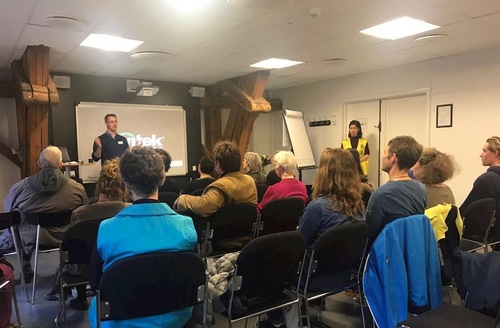 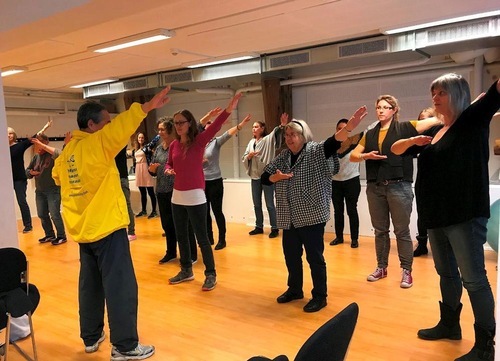 Many people looked forward to the Falun Gong introduction lectures and showed up early to attend them. Falun Gong practitioner Michel introduced Falun Gong and shared his personal experience of cultivation with the audience. He also taught the Falun Gong exercises. People copied the exercise movements along with the soothing music, including a lady in a wheelchair. Many were fascinated by the strong energy which they felt around them. While doing the second exercise, Falun Standing Stance, many said in excitement, “I can feel it!” “Very strong energy!”

After the introductory lecture, many attendees returned to the Falun Gong booth to buy books, ask about local contact information, and ask where to get exercise videos and music. Some made appointments with local Falun Gong practitioners to meet at the group exercise site. Some left their phone numbers to receive future nine-day workshop information. Some went to express their appreciation, as they felt Falun Gong was a great practice. An eighty-four-year-old lady visited the Falun Gong booth after attending the lecture and told practitioners she really enjoyed the practice. She took a copy of all the available information brochures.

“Once Imprisoned for Three Years, Retiree Now Harassed Repeatedly for Her Faith”