(Minghui.org) Today's news from China includes incidents of persecution that took place in 10 cities or counties in 7 provinces. According to this report, 1 Falun Gong practitioners were subjected to mistreatment during their detention, and at least 25 were illegally arrested. 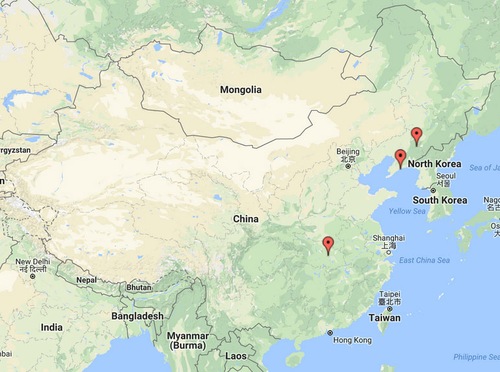 Staff of the Chengxi Community Residential Committee, Shuyuan Neighborhood, went to Ms. Yang Xiuhua's home on the morning of August 30, 2017. They learned that 85-year-old Ms. Yang still practices Falun Gong. They called the Shuyuan Police Station, and several officers arrived. The officers ransacked her home and confiscated photos of the founder of Falun Gong, all her Falun Gong books and weekly publications.

Ms. Sun Yulan was arrested and her home ransacked around August 20, 2017. The police officers did not find any Falun Gong related items. Ms. Sun returned home that afternoon.

Another practitioner with the surname Huang was also harassed, arrested and released on August 21, 2017.

Zhao Lianke, head of the Xinbin County Domestic Security Division, and other officers broke into and ransacked Ms. Liu Yukun's home in Hongmiaozi Township on the morning of August 21, 2017. They confiscated all her Falun Gong books and Minghui Weekly. Ms. Liu was interrogated in the police station for over four hours. She was taken to the Nangou Detention Center in Fushun City that evening and detained for 10 days. The police extorted 200 yuan from her family.

Four Falun Gong practitioners in Mengyin County were released between February and April 2017 after the local procuratorator decided to not indict them for exposing the persecution of Falun Gong.

Ms. Liu Fenghou was released on April 22, 201. She was arrested in August 2016 for seeking the release of her husband, who was sentenced to two years after having served 13 years in prison for refusing to renounce Falun Gong.

Mr. Shi Zehui was arrested on February 1, 2017. He was held in a hotel for 10 days before being transferred to the Rudong Detention Center.

The local procuratorate issued a formal arrest warrant against him on March 16, but returned the case to police on June 24 due to insufficient evidence. The Rudong Police Department resubmitted the case on July 25 and prosecutor Chen Jianqing indicted him. His lawyer visited him on September 7. His trial was scheduled for September 19.

Twelve residents from Harbin City were scheduled to face a trial on September 20, 2017 for refusing to renounce Falun Gong.

The practitioners were arrested between January 18 and 19, 2017. Ms. Ren was released on the day of her arrest, but was arrested again on July 13, 2017. She was issued a formal arrest warrant 4 days later, while the other 11 practitioners received their arrest warrants on March 10.

Ms. Shi's son hired a lawyer to defend her constitutional right to freedom of belief. Police officer Yu Xiaoguang (phone number: +86-15046115776) demanded to see an approval letter from the local judicial bureau before he could accept the lawyer's application to represent Ms. Shi. The lawyer visited the judicial bureau, and was told that he did not need an approval.

Ms. Jia and her husband were arrested at the same time. They were released three hours later.

Some of the practitioners had been detained in the past for their faith. Ms. Zhu was imprisoned between 2003 and 2009. Ms. Zhao was given one year of forced labor in 2001. Ms. Liu was sentenced to five years in prison back in 2012 and was released ahead of time in October 2015. Ms. Ren served two years in prison between 2013 and 2015.

Mr. Zhou Yaping was sentenced to four years in prison on June 15, 2017 without his lawyer's knowledge. He appealed, but the local higher court upheld the original verdict and fined him 5,000 yuan.

Mr. Zhou was arrested on May 24, 2016 for distributing Falun Gong materials. The police did not inform his family of his arrest and it took four months for them to find out where he was being held. No further information is available.

Mr. Li Ying, 30, was sentenced to three-and-a-half years in prison for refusing to renounce Falun Gong.

He was arrested on July 20, 2015 and given a prison sentence on December 19, without any trial. He was moved to Chengxin Farm on January 5, 2016 before being transferred to the Yuzhang Prison on January 25, 2017.

He was put in solitary confinement and is being held in Division One in the prison.

Mr. Lu Chunshan was on his way to attend a party on October 10, 2016 when he ran into a young man whose motorcycle broke down. He stopped to help him fix the bike and talked about Falun Gong while working on the motorcycle.

The young man called police as soon as Mr. Lu left. Officer Pu Lin arrived at the party minutes after Mr. Lu got there. Pu arrested Mr. Lu without showing any warrant and gave him 14 days of detention.

Mr. Lu's personal belongings were confiscated. A guard named Tang Yang at the detention center beat him, as well as handcuffed and shackled him for 10 days.

Ms. Sun Lihao and Ms. Zhao Xuejing were arrested for putting up Falun Gong banners near Legou Mall on May 12, 2017. Their homes were ransacked. The two practitioners were held in the Jingu Detention Center.

The procuratorate rejected the two cases on June 27, 2017 for insufficient evidence. The two practitioners’ families learned on July 20 that the police department claimed to have done a “supplementary investigation” and submitted their cases to the procuratorate again.

Ms. Sun’s family went to the procuratorate on the morning of September 6, 2017 and was told that the two practitioners’ cases were rejected again and returned to the police department.