(Minghui.org) Today's news from China includes incidents of persecution that took place in 11 cities or counties in 9 provinces. According to this report, 5 Falun Gong practitioners were subjected to mistreatment during their detention, and at least 10 were illegally arrested. 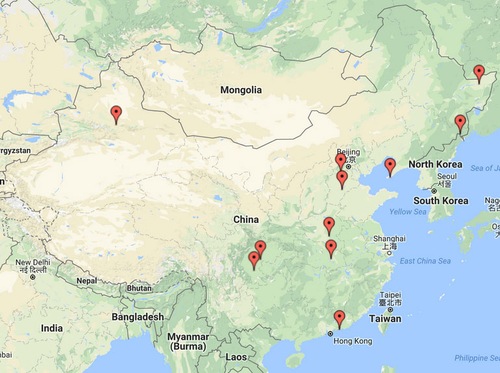 Ms. Ma Li was arrested at work on September 26, 2017. She was taken to a detention center for 15 days of detention.

Ms. Dong Muli was arrested and taken to a detention center on October 1, 2017.

Ms. Gu Li, 49, from Jinzhou District, was arrested on December 6, 2016 for talking to people about Falun Gong. She was officially placed under arrest on December 27, 2016 and was tried on April 28, 2017. Ms. Gu was sentenced to four years in prison and fined 7,000 yuan on May 19. She appealed, and the intermediate court upheld the original verdict without a hearing. She was taken to the Liaoning Women's Prison on September 12.

Ms. Zhang Hongyuan, a former employee of the No. 3303 Military Factory, from Shidong Neighborhood, Jiangxia District, was arrested at home by officers from the Shidong Police Station and personnel from the Shidong Residential Committee on September 25, 2017. Her whereabouts are unknown.

Mr. Zhuo Guibin, from Zhuojia Village, had left home to avoid persecution. He was arrested by officers from the Yi County Police Department. It is not known where he was detained. Mr. Zhou was handcuffed and taken to the county Chinese Medicine Hospital three days after he began a hunger strike.

Officers from the Xinhualu Police Station went to Ms. Liu Shujun's home in September 2017. They ransacked her home and confiscated Falun Gong books and photos of the founder of Falun Gong. They also videotaped their search. She noticed that she had been living under surveillance for some time.

Ms. Chen Xiangmei and Ms. Wu Lijun were reported for talking to people about Falun Gong. They were arrested by a group of police officers in late September 2017. Both practitioners were released for health reasons.

Mr. Huang Faliu, Qingnian Park Playground manager in Haifeng County, and his wife, Ms. Zhou Jinhua, were arrested by over a dozen officers from the Xinyuan Police Station on the morning of October 1, 2017 for talking to people about Falun Gong. The arresting officers were led by Wu Xiaosha and Pan Yongming, heads of the Haifeng County Domestic Security Division.

Mr. Huang was released the following afternoon. Ms. Zhou was placed under administrative detention for 15 days.

Ms. Lin Yonghong, about 65, was arrested at home by officers from the Longjing Police Station, Da'an District, about 20 days ago.

Ms. Lin was previously arrested by the officers several months ago for distributing Falun Gong materials. Her home was ransacked, and she was detained for five days at the Yong'an Detention Center.

Mr. Qi Jingpu and his wife were arrested at a food market by six or seven officers from the Dongfeng Police Department in the morning on September 30, 2017. They were taken to Anqing Police Station. The officers ransacked the couple's home when Mr. Qi's wife was on her way home after being released from the police station.

Ms. Xiang Rong, about 50 and disabled, was recently arrested and taken to the Anningqu Brainwashing Center.

Ms. Xiang was arrested in 2015 for filing a lawsuit against Jiang Zemin, the former head of the Chinese Communist Party. She was held in a detention center and was severely abused. When she was released, she was in critical condition. She has subsequently been harassed on numerous occasions.

“Woman Facing Three Years in Prison for Her Faith, Daughter Threatened with Arrest”