(Minghui.org) Falun Dafa practitioners participated in a health expo at the Houston Chinese Community Center on the afternoon of October 21, 2017, to introduce this ancient meditation practice to local Chinese residents. Sponsored by the Epoch Times and New Tang Dynasty (NTD) Television, this event attracted many people who wanted to learn more about Falun Dafa. 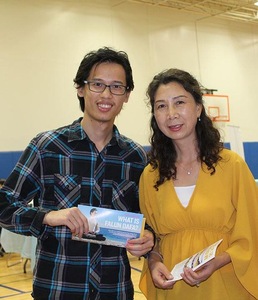 Mr. Wu (left) learns about Falun Dafa from a practitioner.

Mr. Wu was born in the United States and he came to the expo looking for something that could help with his mother's health. “My mother is from China and she told me about Falun Dafa before, but I did not remember much about it. Could you explain it to me more?” he asked.

Practitioner Ms. Chen talked with him about how the practice can improve one's health and mind nature by doing five exercises and following the principles of Truthfulness-Compassion-Forbearance. “These principles apply to the workplace, the family, and other social settings,” Ms. Chen continued. She said practitioners follow these principles and try to be better citizens no matter where they are.

Mr. Wu read several pages of Zhuan Falun, the main teachings of Falun Dafa, and said he really enjoyed it. Ms. Chen told him he could continue reading the book online at home for free. Mr. Wu thanked her and purchased a copy for his mother.

Ms. Zhou said she heard about Falun Dafa from watching NTD Television. “It seems to me that the exercises could improve one's health and make one fit. I really like it.” A practitioner told her that, in addition to doing the meditation, the practice also teaches one to be a better person. Intrigued, Ms. Zhou said she would like to give the exercises a try. “But I stay at home in the suburbs with three children. Will it work?” she asked. The practitioner explained that she could read the books and learn the exercises online free of charge. Ms. Zhou then heard about the persecution in China, and she agreed to formally renounce the communist organizations she'd joined in the past.

Another woman, Ms. Chen, said that she was a Chinese Communist Party member. A practitioner shared how the Party has destroyed Chinese tradition and culture to promote its doctrine of violence. In addition, the regime has harmed untold numbers of Chinese with its hate propaganda and brutal practices in its numerous political campaigns. Ms. Chen nodded and decided to renounce her Party membership.

A couple in their 60s was hesitant to speak with practitioners and turned down the brochures they were offered. One practitioner explained to them that Falun Dafa is welcomed in over 100 countries and that only in China is it suppressed. “As a matter of fact, many of the high-ranking officials involved in the suppression have been arrested and charged,” he said.

In the end, the couple said they now understood that one would be blessed for quitting the communist organizations. “Please help us quit the regime so that we can have a safe and better future,” said the husband.

“My Husband's Gratitude Toward Falun Dafa”