(Minghui.org) Falun Gong practitioners were invited to a health expo on October 14 at a school in Aalborg, Denmark. Health professionals and therapists gave presentations as well as consultation on health-related topics.

Jan, the event organizer, thanked practitioners for their participation. “Your group was the best among our participants.”

Having heard about Falun Dafa from previous health expos, he talked with practitioners and was impressed that the practice had benefited about 100 million people worldwide. He remarked that he could feel strong energy from the practice and gave the most prominent place in the expo to the Falun Dafa group. He also visited the booth several times during the event and said that he would check out the practice. “I will try to attend the group exercises at Aarhus,” he said. 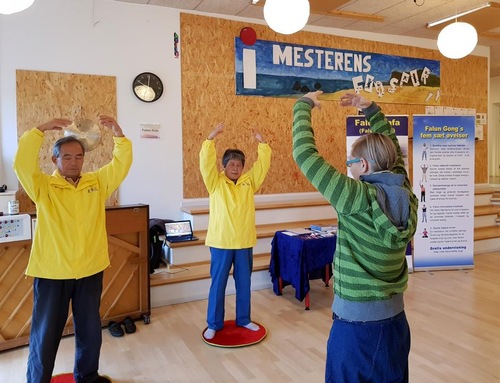 A woman learns the exercises from Falun Dafa practitioners during a workshop in Aalborg on October 14, 2017.

Practitioners also held a workshop during the expo and presented the spiritual practice to attendees. One young man who attended the workshop said that he had learned a lot. “This seminar gave me more confidence about life, and I like the energy in the exercises.” He left his contact information and said that he hoped to join the group exercises later.

Many people heard about Falun Dafa for the first time during the event. One woman said that she was glad to hear Falun Dafa was easy to learn and free of charge. She purchased a copy of the book Falun Gong, and said that she would read it and do the exercises.

Another woman watched the exercise demonstration for a long time. She said that she had learned other types of meditation systems previously. “But Falun Dafa seems easy to learn and I think I will give it a try,” she remarked.

“Removing My Attachment to Comfort Brings Back Good Health”