Husband Imprisoned and Tortured in Prison for His Beliefs, Wife Files Complaint to High Court

(Minghui.org) Mr. Hua Lianyou from Tianjin, imprisoned for his faith, has been on a hunger strike for the past 18 months. He has been subjected to repeated force-feeding and torture. 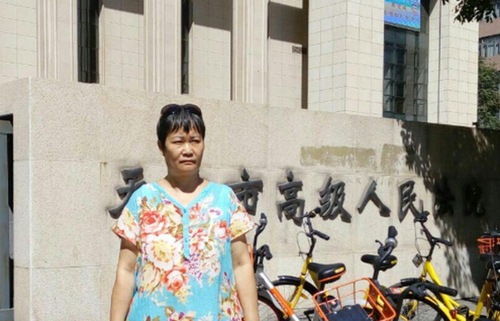 Mr. Hua was arrested on April 14, 2016, for practicing Falun Gong, a spiritual discipline persecuted by China’s communist regime. Please refer to news report Tianjin Man Force-fed for One Year and Counting, Family and Lawyer to File Complaint Against Prison that details the torture he was subjected to from April 2016 to April 2017.

While preparing her initial complaint, Ms. Tian went to the Beichen District Court in April 2017 to read her husband's case file. The authorities allowed her to read only a portion of the file. Nevertheless, she filed the first complaint to the Tianjin No.1 Intermediate People's Court on April 20, 2017.

She visited her husband again on July 10, 2017. Mr. Hua was tied to a wheelchair and was wheeled in by an inmate who was assigned by prison authorities to closely monitor practitioners.

Wang Dazhi, one of the assigned inmates, force fed Mr. Hua Lianyou with food that contained unknown liquids, which smelled like disinfectant and soap.

Ms. Tian and her daughter visited Mr. Hua again on August 22, 2017. They found that Mr. Hua's ears were damaged because guards tied a mask tightly to his face for a month to stop him from throwing up what they force-fed him. He had not been allowed to have a bath for 15 days.

On August 25, 2017, Ms. Tian submitted her complaint against the prison to the Tianjin High People's Court.

“Encounters While Sending Forth Righteous Thoughts”