(Minghui.org) Today's news from China includes incidents of persecution that took place in 14 cities or counties in 12 provinces. According to this report, 7 Falun Gong practitioners were subjected to mistreatment during their detention, and at least 27 were illegally arrested. 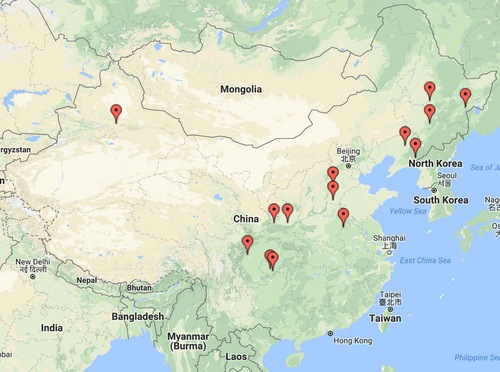 Officers from Kuandian County Police Department and Niumaowu Town Police Station broke into Mr. Song Xianshuang's home and ransacked it on the afternoon of September 11, 2017. They confiscated a computer, a printer, and Falun Gong books. Mr. Song was not at home. The officers arrested his non-practitioner son-in-law instead.

Ms. Li Zonglan was arrested at home by plainclothes officers from the Yubei District.

Ms. Zhong Siqiao from Jiulongpo District was arrested at work by officers from Yangjiaping Police Station and Tiema Group Police Department on September 8, 2017. Her home was ransacked. She was taken to a brainwashing center.

Four practitioners were tried for the second time at Xi'an City Intermediate Court on July 14, 2017. Luo Chengxing, a judge at the intermediate court, announced on September 8, that the court dismissed their appeals and upheld the original verdicts.

Mr. Qiang Mengsheng from Taiyan Village, Gaojia Town, Weibin District was tried in Weibin District Court on May 10, 2017. He was given a five-year prison term at the end of May and was taken to the Weinan Prison in mid-August.

Ms. Song Shuangxing from Shulan City was arrested by two officers from Beicheng Police Station on September 12, 2017. The officers ransacked her home and confiscated Falun Gong books and a notebook computer. She was taken to the Nanshan Detention Center, which refused to accept her. The officers then took her back home.

Mr. Zhang Wuhan from Mazhuang Village, Nanying Town, Gaocheng District was arrested and his home ransacked by local plainclothes officers on September 7, 2017. He was taken to the Wujiecun Detention Center, Gaocheng District.

Ms. Zhang Qiong from Qiaocheng District was reported for talking to people about Falun Gong on September 12, 2017. She was arrested by officers from the Xinji Police Station. Her whereabouts are unknown.

Ms. Pan Xiaorui was arrested by officers from the Zhongyinggong Police Station on September 11, 2017. She was taken to the Urumqi City No. 3 Detention Center for 15 days of detention.

Five practitioners in E'zhou City remain detained since their arrest on July 12, 2016.

The families also hired lawyers to defend the practitioners' constitutional right to freedom of belief. Police captains Xia and Luo and prosecutor He Yong have given various excuses to prevent their lawyers from reviewing the case. Local authorities have labeled this an important case, and even the Hubei Provincial Procuratorate, People's Congress, and the Discipline Committee have gotten involved.

There was a pre-trial meeting scheduled for May 31, 2017, but its details remain to be investigated.

Mr. Wei Chengde and Mr. Li Qinjun were arrested on May 12, 2017 for putting up informational posters about the persecution of Falun Gong. Officers Ma Jichang, Wang Lijian, and a few others ransacked Mr. Li's home using the key found on him.

Mr. Li's wife, father, and father-in-law have worked with local practitioners to seek the release of Mr. Li and Mr. Wei. The procuratorate finally decided to return the case, but the police have still refused to release Mr. Wei and Mr. Li.

Two practitioners in Meizhou City were sentenced to prison for refusing to renounce their faith. They are now appealing their cases.

Ms. Chen Qingfang was arrested on March 18, 2017, while Mr. Tu Qingguang was seized on April 12, 2017. The two practitioners were tried jointly by Meijiang District Court on July 19.

The 60-year-old graphic designer in Mudanjiang City began practicing Falun Gong only last year, and he has already changed into a totally different person. He is no longer the quick-tempered husband and father known to his family. Instead, he is much more mellow and always has a smile on his face. He also takes good care of his 88-year-old mother who is suffering from complications of a brain hemorrhage.