(Minghui.org) Former Canadian Secretary of State for Asia-Pacific David Kilgour and human rights attorney David Matas hosted a series of events on January 11-15, 2017 in Latvia’s capital, Riga. The gatherings aimed at informing the Latvian people about the state-sanctioned harvesting of organs from living prisoners of conscience in China, especially Falun Gong practitioners. In meetings with elected officials, the two defenders of human rights discussed how legislation could help end this ongoing violence in China.

For the past decade, Mr. Kilgour and Mr. Matas have been investigating forced organ harvesting in China. In 2006, they published their first report, “Bloody Harvest,” for which they have been nominated for the Nobel Peace Prize. In collaboration with China expert and journalist Ethan Gutman, an updated investigation report, Bloody Harvest/The Slaughter: An Update was released in the summer of 2016, which contains further evidence of the Chinese Communist Party’s (CCP) atrocities.

Mr. Kilgour and Mr. Matas presented a lecture titled “On the organ harvesting in China and its relationship with the rest of the world” on January 11 at the Saeima–the Parliament of the Republic of Latvia. The session was attended by Members of Parliament and others concerned about human rights.

Meetings were also held in the Ministry of Foreign Affairs and the Ministry of Justice, as well as with individual professionals, who can help promote positive changes in this matter in their daily work. All countries are encouraged to help end the forced organ harvesting in China via legislation, as has already been done in Israel, Taiwan, and Spain. 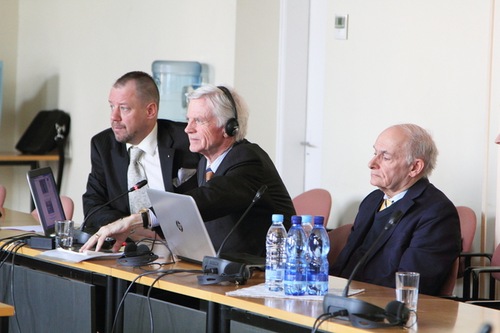 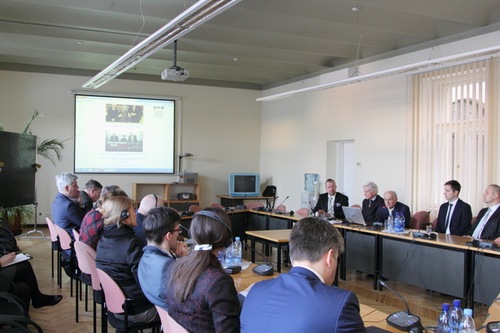 Presentation at the Parliament of the Republic of Latvia: “On the organ harvesting in China and its relationship with the rest of the world.”

250 Killed for Their Organs Daily in China

Mr. Matas pointed out that a 2013 European Parliament resolution calls on the EU Member States to address the issue of organ harvesting in China, openly condemn it, and inform citizens who are traveling to China about the issue. He also pointed out that the Latvian Constitution preamble states that the Latvian people condemn crimes committed by communist regimes. He invited the audience to understand that today they were discussing precisely the crimes of the communist regime in China.

He further suggested that hardly anyone in the audience knows whether people from Latvia are going to China for transplant tourism, or how many people may be doing so. He discussed the Latvian government’s announcement of joining the Council of Europe Convention against illicit trafficking of human organs, noting that there is serious work ahead to adapt national laws to the convention.

Mr. Matas said that negative publicity abroad makes the Chinese government uncomfortable, and if even a small country like Latvia condemned organ harvesting from Falun Gong practitioners in China, it would help the Chinese government realize that it really can no longer continue to perpetrate such crimes. Condemnation from Latvia would certainly contribute to stopping the organ harvesting crimes more quickly. He stressed that Latvia is well positioned to take such a stand because it has previously confronted and opposed the crimes of communist regimes.

A lecture was held on January 11 at the Zanis Lipke Memorial entitled “Bloody Harvest – China’s big secret,” followed by a question and answer session. The event was attended by embassy representatives, Members of Parliament, government officials, transplant doctors and other medical practitioners, and even transplantation specialists who came from the neighboring countries of Lithuania and Estonia.

MP and doctor of reanimatology Martins Sics, who attended the lecture, said that the EP resolution condemning the removal of organs was very close to his heart. He said that he was initially aware of organ harvesting from prisoners in China without consent. The Chinese doctors whom he has met at congresses have told him that it was rational to use those who had been sentenced to death. But later, terrifying stories about egregious violation of human rights became known, including the fact that the death penalty is imposed on political prisoners with no proper legal proceedings, and that these people have become the victims of forced organ harvesting.

Mr. Sics said that these crimes are no less terrible than those performed by the Nazi regime. He believes that each and every action to condemn the practice and trying to prevent it will add a little extra weight that will help move the situation to the side of justice.

Janis Martins Skuja, a board member of the Latvia for Tibet Association, said after hearing the lecture that he was very concerned with the topic of organ harvesting in Communist China. He pointed out that this issue must be disseminated to all, because it affects everyone. He added that if today one remains indifferent about what is going on somewhere else in the world, then at some point he may remain indifferent about what is happening on his own doorstep.

A transplant coordinator from Tartu University Hospital said she had previously known that, in China, organs were obtained from criminals who were found guilty of their crimes. But to learn that organ harvesting is performed on innocent people who practice Falun Gong reminded her of the Soviet Union's oppression, when people simply disappeared and never heard from again.

After the lecture, some attendees noted that the necessary legislation may be difficult to push at state levels, because so many countries today derive substantial economic benefit from their cooperation with China. The consensus, however, was that it is a duty to stand up and oppose this injustice. As one guest said, “Otherwise, there is no guarantee that, at some point, something similar could happen to us.”

Lecture at the Riga Ghetto and Latvian Holocaust Museum

Mr. Matas and Mr. Kilgour held a meeting with the Riga and Latvian Jewish congregation on January 12 at the Riga Ghetto and Latvian Holocaust Museum. Representatives from the museum and other invited guests attended the event. Visitors saw how the results of the investigation demonstrate that forced organ harvesting in China is indeed happening, and that organs for transplantation are removed primarily from Falun Gong practitioners. A conservative estimate of the number of such transplant operations carried out in China ranges from 60,000 to 100,000 each year. 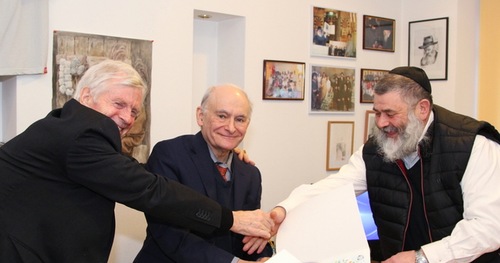 At the meeting with the Riga and Latvia Jewish congregation, Riga Ghetto and Latvian Holocaust museum’s chairman of the board, Rabbi Dr. Menahemu Barkahanu.

The radio station “Mix FM” aired an interview with David Kilgour and David Matas on Thursday, January 12. The interview is available here.

David Kilgour gave another lecture on Saturday evening at the museum in the Riga city center. The lecture was open to the public and was also aired live and online.

After the lecture, an audience member asked if the investigators were aware of possible CCP threats during the investigation and whether they ever thought to cancel the investigation. The answer was that there were very direct threats. But the thought to abandon the investigation never occurred to them, because in comparison with the enormous difficulties that prisoners of conscience are facing in China, the threats to them were relatively minor.

Both Mr. Kilgour and Mr. Matas said that they were determined to continue their work to help people in China who are brutally murdered simply because they choose to follow Falun Gong's principles of Truthfulness-Compassion-Forbearance.