(Minghui.org) There are still many local residents serving time at Anhui Province Women’s Prison for refusing to renounce Falun Gong, a spiritual discipline being persecuted by the Chinese communist regime.

These imprisoned Falun Gong practitioners are subjected to frequent beatings and other forms of abuse because of their faith. Some have sustained irreparable damage. Below are a few cases.

Ms. Wang Lu, a former head nurse at Bengbu City Third Hospital, was arrested on September 15, 2011 and sentenced to 5 years in prison in April 2012. She has been tortured on numerous occasions since her prison admission in May 2012.

Ms. Wang refused to answer roll call or do forced labor, as she broke no law by practicing Falun Gong. She also went on a hunger strike to protest the illegal detention. The guards ordered a group of inmates to beat her for days on end. They roughed her up in the restroom during the day and continued their beatings in her cell at night. They covered her head with a blanket and struck her in the head. Before long, she had lost her hearing. Her ordeal, however, did not stop.

The guards pried her mouth open to force feed her, knocking her teeth loose in the process.

Ms. Wang was also forced to stand at night with her hands cuffed to two bed frames. The guards stuffed her mouth with a dirty rag and shocked her with electric batons. 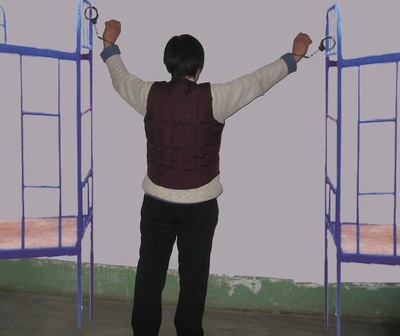 Forced to stand with hands cuffed to two beds

Woman Subjected to Torture in Police Custody and Driven Insane

Ms. Wang Ling became mentally disoriented as a result of abuse she suffered at Bozhou Detention Center. The guards at Anhui Province Women’s Prison continued to subject her to torture after she was transferred to the prison on August 15, 2015. Her condition deteriorated as the torture continued.

She couldn’t drink or eat by herself. She also became incontinent and didn’t know to clean herself. The guards, though, claimed she was faking insanity. Guard Zhang Ling twisted her hands behind her back numerous times.

In order to prevent her family from finding out what happened to her, the guards revoked Ms. Wang’s visitation rights.

A witness described what she saw, “She [Ms. Wang] had gone insane when I saw her at the brainwashing center in the prison. She had bruises all over her body. Her ankles were so swollen that she couldn’t put on her shoes. She was beaten badly, and her ears were also badly swollen.”

Other Practitioners Not Spared

Ms. Liu Yun and Ms. Bai Youhua were also abused. Guards Ding Hua, Zhang Ling and Zhan Yongmei ordered inmates to pour boiling water all over Ms. Liu and Ms. Bai. At other times, the two women got cold water poured all over them. They were also forced to stand for extended periods of time without being given any food or water.