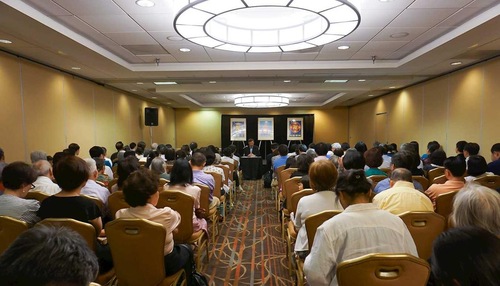 The conference was held at the Holiday Inn in Gaithersburg, Maryland.

A local contact person talked about how she looked inward during conflicts with other practitioners.

She said, “I could not accept it when other practitioners said I was not genuinely cultivating. It was during the Shen Yun performance tour. I was so frustrated that I didn't have motivation to promote the Shen Yun shows.”

“However, when I was watching the show, the dance 'The Power of Compassion' touched me and helped me to see my shortcomings. I adjusted my mood and devoted myself to the promotion of Shen Yun.”

“Further looking inward, I found that my speech and behavior were not always on the Fa, and I was not compassionate enough to others. I let go of the attachment and improved my relationships with others. I don't feel wronged anymore, and I sincerely appreciate Master's guidance and fellow practitioners for pointing out my shortcomings.”

One practitioner said, “We must do everything calmly and carefully. When we run into difficulties, we should not try to avoid them.”

“Conflicts are always there, but as cultivators, we should not be moved by the conflicts. We should not be moved when others blame us or when our suggestions are not accepted. Only if we can cultivate solidly can we improve ourselves and widen the channels for the power of the Fa.”

Ms. Fan said that she pursued achievements when promoting Shen Yun, and that this attachment had made much trouble for her. When she let go of the mentality of pursuit, many things became smoother.

Getting Rid of Communist Party Culture

Ms. Wang said that she often had conflicts with Chinese tourists when she tries to tell them about the persecution of Falun Gong in China. She realized that the driving force behind the conflicts is the Communist Party culture in her mind—she tried to suppress others with force.

Now she tries to constrain herself and pay attention to her tones. She has become more patient when talking to Chinese tourists and always see things from other people's perspectives. She treats Chinese tourists as her family members and tries to talk to them with great compassion.

To Ms. Wu, the Communist Party culture made her emphasize results over the process of cultivation. Due to this mentality, she often got mad at others when the results were not ideal. She realized that a cultivator should respect other beings, and that the standard of measuring a being is how he or she cultivates, not what he or she has achieved.

Dr. Nie is a professor and former department chair at the Catholic University of America. He had concerns about talking to his coworkers and bishops about Shen Yun.

“I was worried that they would not understand the content of Shen Yun, and that if I introduce Shen Yun to them, it would have a negative impact on my career.”

“However, when I let go of these attachments, I found that everything was different than I had thought.”

Many faculty members, the provost, the deputy chancellor, and the Cardinal Bishop of the Greater Washington D.C. area watched Shen Yun after Dr. Nie talked to them.

The provost even talked about the hints on high education he got from Shen Yun in an email to 800 faculty members.

The Cardinal Bishop talked to Dr. Nie for an hour after the show and learned a great deal about the persecution of Falun Gong in China. He said he would pray for the victims and introduce Shen Yun to the Vatican.

Trusting Master and the Fa; Being a Dafa Disciple in the Fa-Rectification Period

Mr. Zheng talked about how he made a breakthrough in cultivation. He was able to endure hardships and perform laborious tasks, but he had a notion that talking to others about Falun Gong and the persecution was too difficult. He also had questions about Master's teachings. As a result, he was often distracted by entertainment and could not focus on cultivation.

Recently, Mr. Zheng carefully read Master's recent lectures and saw the seriousness of cultivation. He came to the realization, “If Master believes that I am capable of talking to others about Falun Gong, then I must be capable of doing it.”

After he changed his mind and truly started to treat himself as a Dafa disciple during the Fa-rectification period, he saw dramatic changes in his cultivation. He previously had to force himself to cultivate but now finds that everything in cultivation has become so natural and easy; whenever he has a chance, he is able to tell others about Falun Gong and the persecution. He said, “Things should be like this for a Dafa disciple during the Fa-rectification period.”

“No Tribulation Can Stop Me from Practicing Falun Gong”