(Minghui.org) The best way to end injustice is to make it known. Two car tours kicked off in Queensland, Australia on September 22, with the mission of raising public awareness of the state-sanctioned organ harvesting from Falun Gong practitioners in China.

One team took the southern route and visited Stanthorpe, and the other team visited three towns in northern Queensland, including Gympie, Hervey Bay, and Bundaberg.

The car tours drew the attention of the local media and were warmly supported by the local residents at every stop. People were especially moved by the experience of one of the car tour participants, Anne Zhao, who was tortured in China for upholding her belief in Falun Gong. 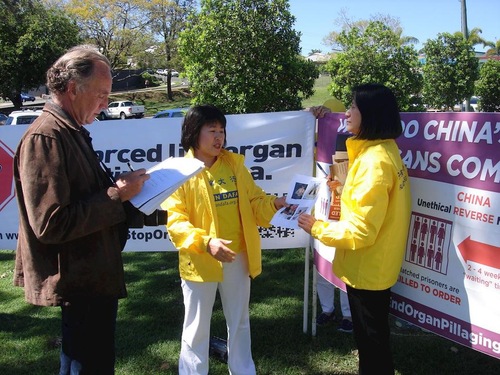 A reporter from the Gympie Times, a local newspaper, interviews Falun Gong practitioners.

At the first stop on the northern route, the Gympie Times, a local newspaper, interviewed practitioners. Horrified by the Chinese communist regime's forced organ harvesting of living Falun Gong practitioners, the reporter asked for detailed information. Anne told the reporter about how she was beaten with electric batons and tied to an iron frame in a Chinese prison, only because she refused to renounce Falun Gong.

The reporter was surprised by how little he knew about Falun Gong and the persecution. He thanked the practitioners for staging the car tour and promised to share the information. 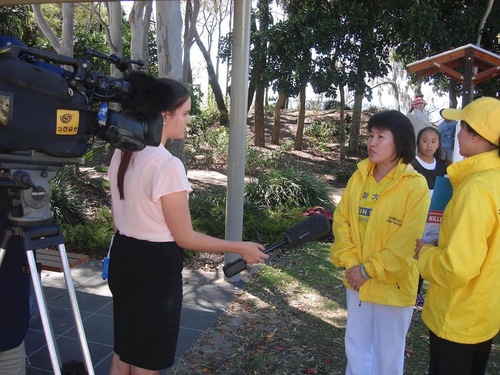 The reporter from WIN TV in Hervey Bay was also appalled by the organ harvesting atrocities. Practitioners showed the reporter recent evidence collected by independent investigators, who compiled statistics from 700 Chinese hospitals showing that thousands of Falun Gong practitioners in China have been killed for their organs since 2000.

The reporter also asked Anne Zhao for details of her experience of persecution. Upon leaving, she said to the practitioners that she admires their spirit. She feels that they are doing a great thing by informing Australians about such a major event.

The reporter asked practitioners to stay in touch and to keep her posted on developments in China. She said that she and her colleagues will try their best to pass on the information about what is happening in China. 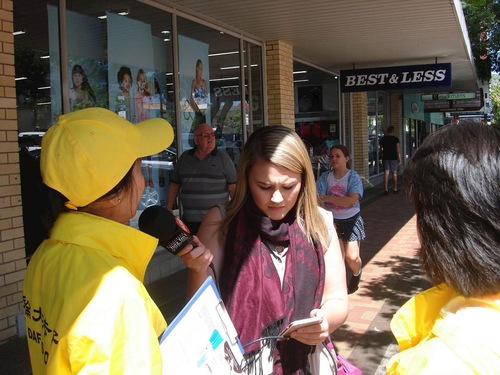 The city government of Bundaberg enthusiastically supported the car tour. They arranged a press conference at the busiest spot in town for practitioners, and informed the local media.

4BU Radio station received the press release and interviewed the practitioners. The reporter was saddened that so many innocent people have been killed over the past decade, and was especially concerned that so few people are aware of it. She promised to tell her radio audience about what has been taking place in China.

Many local residents told practitioners that they heard about the car tour on the news the previous night, and they strongly support practitioners' peaceful resistance against the bloody organ harvesting.

A local woman said, “Some people don't want to hear bad news from a country so far away from them. It's sad that they don't want to know. The silence of good people makes the evil more rampant.”

The woman added that she admires practitioners' spirit and effort. “Your persistence will stop the evil. Keep up the good work,” she encouraged practitioners. 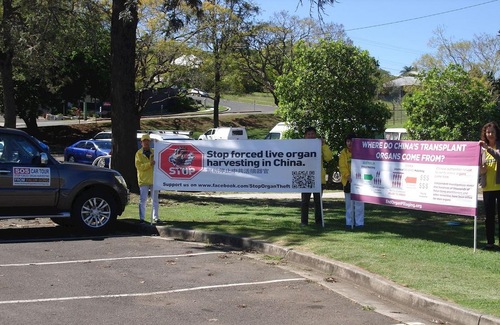 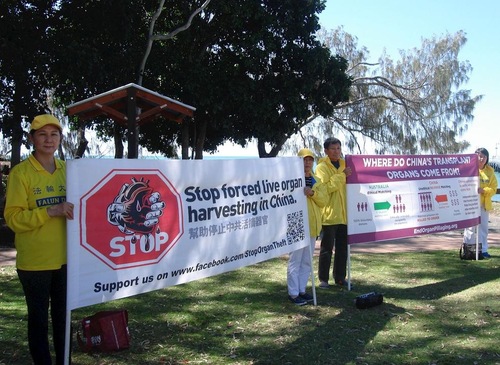 The car tour stops in Stanthorpe. Local newspaper Stanthorpe Border Post interviewed the practitioners. Many people signed the petition to condemn the persecution in China.

“Ms. Zhang Meiying Constantly Harassed after Her Release from Prison”