(Minghui.org) Today's news from China includes incidents of persecution that took place in 14 cities or counties in 9 provinces. According to this report, 8 Falun Gong practitioners were subjected to mistreatment during their detention, and at least 14 practitioners were illegally arrested. 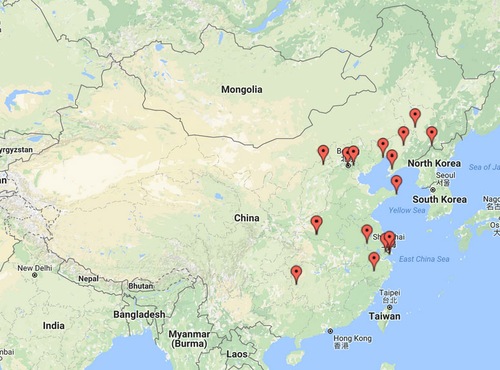 Ms. Xu Yongqing and Ms. Yang Xuezhu were taken into custody by the Letters and Complaints Office on August 22, 2016. They were subsequently taken to the Shanghai People's Square Security Police Station. Both practitioners were placed in criminal detention.

Officers from the Jinhua 610 Office, the police department, the Domestic Security Division, and police stations recently harassed local practitioners to varying degrees. Some officers were arrogant and took pictures.

Mr. Zhu Limin and Ms. Jin Peizhen, 77, were arrested by officers from the Wucheng District 610 Office and the Domestic Security Division on August 16, 2016. Both practitioners are being held in the Shuanglong Scenic Area Hotel.

Zhang Gang, director of the Sijiazi Township Police Station in Xingcheng City, showed up at Ms. Zhao Haixia's home in Fengtun Village to harass her on August 9, 2016. He intended to arrest Ms. Zhao, but she was not home.

Mr. Li Hongwei was tried on August 3, 2016. The court recently announced that Mr. Li had been sentenced to four and a half years in prison and fined 10,000 yuan.

Mr. An Zhensheng was arrested by about twelve SWAT officers when he was doing business at his stall on August 9, 2016. He was place under criminal detention that day. He is being held in the Datong City No. 2 Detention Center.

Mr. Yang Hongchen and his wife Ms. Guo Yafen from Fanjiatun Village were sentenced to three years in prison. Mr. Yang is being held in the Jilin No. 2 Prison. Ms. Guo is being held in the Lanjia Prison in Changchun City. Their sick son, who is not able to take care of himself, has been left alone at home.

Ms. Hua Liping was arrested and taken to a brainwashing center.

Four or five Sanhe City Domestic Security officers and about twelve officers from the Yangzhuang Town Police Station jumped over the wall of Ms. Wang Lianshuang's home to break in on the evening of August 22, 2016. Ms. Wang was arrested and taken to the town police station.

The officers ransacked her home and confiscated Falun Gong books, over 100 brochures, signs, and 4,000 yuan in paper bills with Falun Gong information printed on them.

Mr. Liu Hongcai was arrested when he stepped out of his home on the morning of August 17, 2016, by officers from the Linjiang City Domestic Security Division. The officers ransacked his home and confiscated over ten copies of Falun Gong books, two cell phones, a desktop computer, and other items. When his mother went to the police station to demand his release, she was threatened. Mr. Liu is being held in Baishan City for 15 days of detention.

That afternoon, several practitioners who study Falun Gong teachings together were arrested at Ms. Shi Fengxia's home. The officers ransacked the place and confiscated computers and printers.

The Wancheng District Court has scheduled another trial for Ms. Liang Yunying on August 26, 2016.

Ms. Qiao Lunqin, in her forties, was reported when she was talking to people about Falun Gong on August 9, 2016. She was arrested by officers from the Beijing Road Police Station. She was viciously beaten at the Nanyang City Detention Center.

Ms. Chang Yu has been held in custody for three months.

Mr. Fan Chunming was arrested on August 23, 2016, for telling people about Falun Gong. Her whereabouts are unknown.

Ms. Huang Dongmei, outstanding staff member from the Nanjing Commercial Bank, was arrested at work by officers from the Gulou District Domestic Security Division and the city 610 Office on the afternoon of August 17, 2016. She was taken to the Gulou Brainwashing Center.

Ms. Shi Shenglan, from Houtang Township, Chenxi County, was reported when she was distributing Falun Gong informational materials on the morning of August 17, 2016, and arrested by officers from the Huangxikou Police Station. She was held in the Chenxi County Detention Center.